I Don't Care If There's Cursing.

The sun is shining on the Bob Lucas Stadium; the rust amongst the Barbara Windsor Stand roof gleams, the spiders webs woven on every barrier sparkle and the reflection caused by inexplicable amount of grease slicked in George Rolls' hair dazzles those in a three mile radius and causes problems for aeroplanes passing overhead. 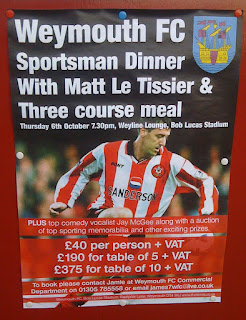 Get your tickets now.
There's a couple of new features in the match programme that make it worth the £2.50 alone. First up George Rolls' dream team! George picks the best eleven players he has (imagined he has) played with. In goal of the George Rolls Dream Team....George Rolls! Such modesty. George sums himself up by saying "great handling (hmm) just poor attitude." Yep. Your words George, not mine. George has apparently lined up with Robbie Fowler, Nicky Butt, Julian Joachim and ehh Ricky Otto. Chinny reckon. 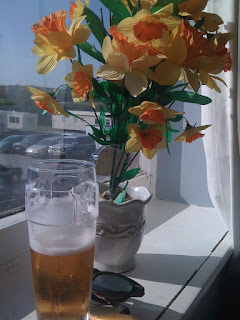 Don't say I never send you flowers. I care about you.
Weymouth start brightly on a pitch that is drier than a silica gel factory in the desert and dustier than those 47 unopened boxes of autographed George Rolls photos that remain untouched in the back of the Rolls garage. George is in town for tonight's Fans Forum, although he's nothing to do with the club apparently. Fans are angry and want answers and this evening could be tastier than an Amanda Rolls quiche

Sam Malsom jinks inside a couple of Hungerford defenders and smacks it in to give us the lead on 11 minutes. Hungerford respond and we get nervous. From a corner Byerley shouts "get switched on, nothing stupid", which gives you a massive clue as to our problems have been this season. Around me some regulars indulge in some playful one sided banter with the linesman; "He's a mile off you blind dick", followed by the slightly inconvenient "if you can't keep up (with play) you might as well fuck off" and the highly unlikely "we get every shit ref in the country down here." This ladies and gentleman isn't any non league terrace, this is the Barbara Windsor stand. 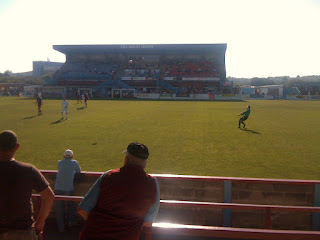 A picture of a stand that's not the Barbara Windsor stand. Helpful.
Things take a turn for the worst, Hungerford score and some more shocking defending sees Hungerford take the lead. This then leads captain Ben Geering to barge into the culprit, Scott Dixon, and he has to be dragged away. This is always massively embarrassing and he's lucky not to be sent off. Poor old Scott, it's not the first time he's been on the wrong end of some unnecessarily aggressive behaviour this season. (allegedly, apparently, according to local rumour, so my Gran told me)

Ah Duff man. Can't get enough of that wonderful Duff. Oh yeah! Craig Duff scores just after half time to let me reprise my staunch belief that were going to win the FA Cup this year.

Two minutes later it's gone to shit. Geering has been controversially given a straight red for a professional foul, Hungerford have taken the lead from the resulting penalty, the ref's getting dogs abuse from The Babs Stand and I can barely hear the woman at the limousine hire office as I try to cancel that white stretched limo I'd foolishly just booked to take me to Wembley on 5th May. Down to ten men, a goal down and with the ref against us, we're in trouble....this sounds like a job for The Babs Stand. 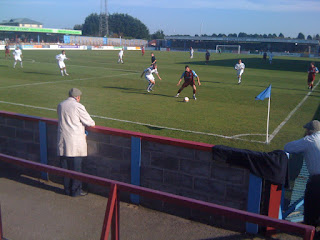 Token match shot.
When riled The Babs Stand turns into a seething mass of official abusing rage. The ironic cheer that greets a decision for us is tinnitus inducing; as a throw in decision is reversed the stand shakes with outrage; Byerley is booked for dissent and the Babs is now in danger of collective heart failure. On the pitch Hungerford have chances, but Weymouth are roared forward, powered by the sense of injustice flowing from the Babs terraces. Another decision goes against us and the Babs explodes into a fury of wildly gesticulating arms and bulging blood vessels; red faced men launch themselves at the perimeter wall in the hope their insult is the one that breaks the ref, while behind them others push themselves up on the barriers to add new layers to the voice straining crescendo of fury. It's superbly raucous stuff. 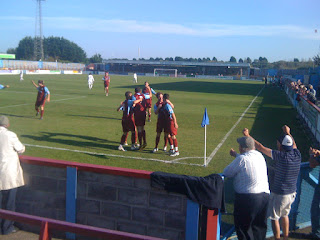 Ah! Duff Man! Oh yeah!
The team seem to be lifted by the noise and are united with the crowd on defeating the common enemy of the officials and with 15 minutes remaining the great big lummox that is Matt Groves bobbles in an equaliser. The Babs doesn't wear happiness well and amongst the cheers of joy are soon drowned out by the yelps of anger as the ref fails to book a Hungerford player who lambasted a lino for a failure to award a free kick in the build up to the goal.

The final whistle brings applause from the Babs for a gutsy performance and the final cheer of the day comes with news that (far inferior) rivals Dorchester have lost 1-0. The Babs slowly empties, it's patrons off home to calm down and to dream of reading that Dorchester lost to a goal from a highly dubious refereeing decision.