Groover's In The Heart

Warning: This report does contain some flash photography.
We absolutely massively love a mega superlative in Weymouth. Prior to Saturday's FA Cup game the local newspaper had predicted that “FA Cup fever will engulf the area” when Weymouth “go to war” with Hungerford and apparently the “stakes could not be higher.” Hmm.

So when the players entered the field of play to the sound of four people clapping ,amongst a sparse crowd in a stadium made of corrugated iron and breeze blocks it was fair to say the the outbreak of FA Cup fever had been quarantined long before it reached Hungerford. 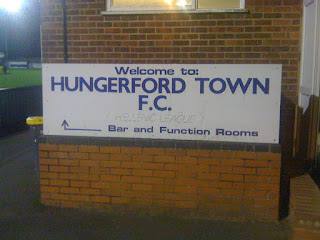 Thrilling photo this one. Really makes you want to read the rest of the blog doesn't it.
Almost seven years ago a Weymouth side, which was by far the greatest team the world has ever seen, as it featured such football gods as the mercurial Bernardo Cariata, midfield genius Danny Byrne and the ehh....Kieran Keen were beaten 4-1 by Dorchester, a result that shook the football world to it's grassy foundations. Dorchester striker Matt Groves scored a hat trick that day and in between time found time to cynically foul, aggressively elbow, confrontationally back in to defenders, make keeper Francisco Ramos look like a mug (fairly easy that one) and cup his ears to Weymouth fans as he ran off to celebrate his hat trick. The big humongous stinky turd.

Now, I didn't expect this to happen. It wasn't suppose to. Groves is a maggot. He's been tainted by the black and white stripes. But, 2474 days after Boxing Day 2004, I'm going to have to change my mind and concur with the chant that “he use to be scum but he's alright now.” 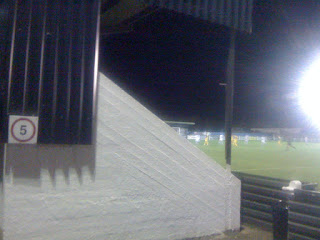 Every football stadium should have a speed limit. Hey, groundhopper you're walking too fast! Slow down! You'll drop those three programmes you maniac!
For every single reason I disliked the guy I know like him after his performance at Hungerford. Our first goal came from him harassing a defender into a mistake, winning the ball and then scuffing a shot that Byerley converted from the keepers save. He's also assistant manager so that gains him an additional AiT thumbs up, any one that takes on a role of responsibility at Weymouth deserves respect, especially as it means they have to deal with Mr. Rolls.

Hungerford equalise as we defend badly, Groves shouts encouragement and urges us to maintain our composure, which we hadn't managed to do on Saturday. He manages better than this and is able to give us the lead, some shoving of a defender goes unnoticed and he manages to knock the ball in. It's definitely the greatest goal that has ever been scored in the universe of football ever, sadly the Hungerford defender – at this point receiving treatment for the pain caused by being crushed by the footballing talent of Groves – shouts “shit goal...fucks sake.” Not very sporting that. Unnecessary. 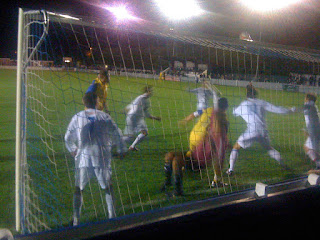 Token match shot.
Groves runs around non stop, expertly holds up play, uses all his experience to draw fouls by backing into a Hungerford defender, which results in him struck with tourettes and unable to mutter anything but sweary words for about thirty seconds. Good work Matthew. This wasn't the last time the Weymouth striker backed into him, so much so that the Hungerford defender must have feared Groves would reverse his car into his later.

The second half continues in much the same way. Groves backs in, holds up the ball, indulges in banter with the crowd, chases lost causes, annoys defenders, causes the keeper to miscue clearances and we look fairly comfortable. The Hungerford keeper, Stuart Moore, keeps them in the game, with one save drawing a pat on the back and a “how d'ya save that” from Groves. 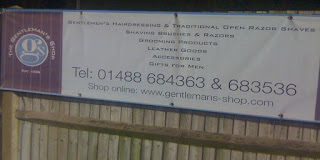 AiT is sponsored by 'The Gentlemen's Shop' of Hungerford. For all your shaving brush and leather goods needs.
But even Moore can not defeat the worlds greatest footballer, Matt 'Groover' Groves, for long. The ball is crossed into the area, Groves backs into his man, the ball bounces off his expanding gut, loops up in the air and with the grace of a rhino falling over backwards Groover leans backwards, punts the ball in the air and somehow the ball loops into the net to give us a 3-1 win! flicks the ball up with unbelievable precision and unleashes a textbook unstoppable overhead kick that Mark Hughes would be so proud of he'd keep it on his mantelpiece and it thunders into the net to give us a 3-1 win! 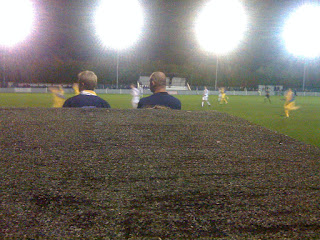 You don't get top quality photos like this anywhere else. Groves (left), King (right).
Some more superlatives? Not a problem. According to the Dorset Echo, (the journalistic heavyweight bringing you all the breaking news from Affpuddle to Winterborne Whitchurch (including Tincleton and Minterne Manga)) their keeper pulled off some It was pretty impressive but not as impressive as our 8-0 magnificent mauling of the miserable Maggots on Boxing Day 2003. For the record, Groover was an unused sub for Dorchester that day. If he'd played I'm sure the scoreline would have been very different.

Up the Terras! Ohhhhh Groover, Groover.....

Oh - a match report through the gift of poetry anyone?
For some great pictures of the match have a look see here.
Posted by Kenny Legg at 08:30