Take the road to nowhere,
Turn left at out in the sticks,
Drive past the middle of nowhere,
Take the first left after the back of beyond,
Arrive at your destination 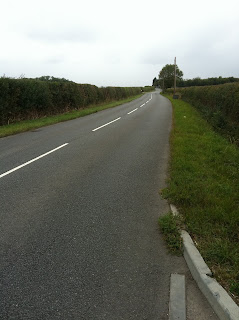 The massed hordes stream into the ground.

Leamington's ground, once located, is straight out of the B&Q football ground show rooms catalogue. You enter through Shed 1 - Turnstiles, make your way along the bulk purchased astroturf, past the hanging baskets, through the maze of picnic tables on the decking and arrive at your destination - the bar! 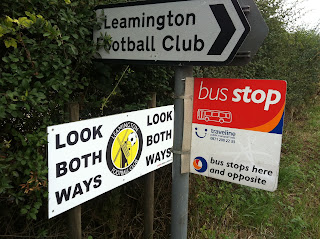 Look Both Ways. Nothing's coming. The bus is due in three weeks.

This isn't just any bar though, it's a bar offering 1.50 pints and pickled eggs. More importantly than that this is a bar operated by Nigel John Hopkins. What do you mean who? Nigel! Hoppo?! You know, he won the award for "Best Manager 2009/10, an award he mostly displays on his office (stock room) door, just below the one that shows the entry criteria to the hub of the bar activity; "Private property unless you have big boobs" Hmm. Quite what Leamington supporter 'Simesy' would make of such sexual discrimination is unknown. 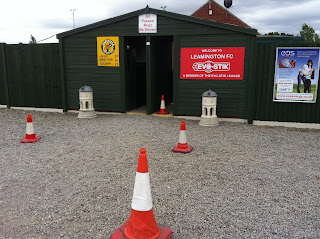 The bar doubles up as an educational centre for the local community. It eschews the Ray Wilkins led monotony of SKY TV coverage and challenges it's patrons to learn a foreign language by watching the Arsenal-Liverpool match on Italian Sky coverage, and it is by no means because it has a dodgy feed. It certainly does broaden the mind, I learnt the Italian for Stuttgart is Stoccarda, and I also learnt Italian coverage of English football is hosted by a Paula Radcliffe look a like, if Paula had spent the last five years running forlornly into a force seven headwind, whilst being battered by a water cannon of her own piss. 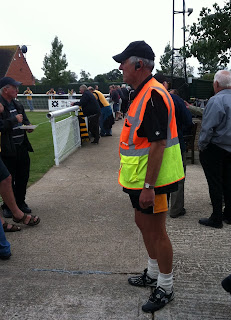 Thought this fella was wearing an all in one steward's jacket. Turns out those are his actual legs and they are actually that orange.

The match programme is also educational. Did you know Jim Bowen was born on the 20th of August 1937? No. Well there you go. That knowledge is safe, you're taking that home with you.

For an added bit of mental stimulation the programme, which is superb (doffs AiT cap), has a Weymouth related word search which is particularly taxing. I found the words; Lodmoor, boats, plague and erosion (genuinely) and even got the bonus backwards diagonal of laeddnuorgygdod. 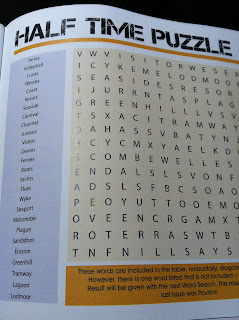 Plague! Tramway! Erosion! What a magical place Weymouth is.

The B&Q chic aesthetic continues inside, as one terrace reveals itself as a shrine to the flat pack shed. Shed two offers club merchandise, shed three tempts fans with burgers and bacon batches (a type of bread roll only seen up north) shed four appeals to the younger fan and offers a range of kids toys (temporary tattoos, nail decorations, mini torches - the obvious football related stuff) and penny sweets (sherbet lemons, rainbow dust-yes please), Shed five offers a range of programmes. Shed Seven were a ropey Britpop band from York and Hanger 17 was a mid 90's kids TV show hosted by an annoying Geordie. 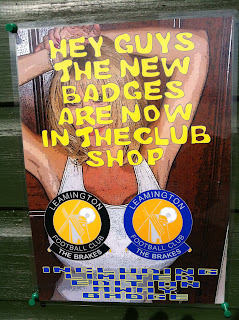 Shed Two - I have never been less likely to buy a badge in my life. I've also never been so flaccid in my life. And the font, oh the font! All kinds of wrong. 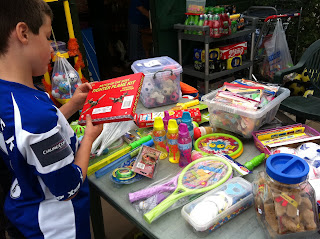 I opted for a mix of shed's two and four. The burger and chips was superb; although it was a bastard to eat with my new fake nails and I accidentally got tomato sauce on my 'I heart Bieber' tattoo. Shambles. 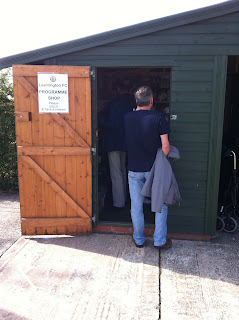 Shed Five - Programmes. One at a time please.

In addition the 'Theatre of Sheds' also has a 'Wood Chippings Stand', an terrace made entirely out of B&Q's entire stock of wood chippings.

Dear Leamington FC - I mock to hide my jealousy at your ground.

For a proper read as to why Leamington play here and the history of the club click your mouse on this article on In Bed With Maradona.

Dear George Rolls - Maybe Amanda would like to set up a tuck shop at the Bob Lucas Stadium? She doesn't seem that arsed at the moment, this might make it more interesting for her. Think about it. I am willing to act as a consultant should she wish to pursue the idea and by reading this you have just granted me 70% of the shares in any tuck shop. 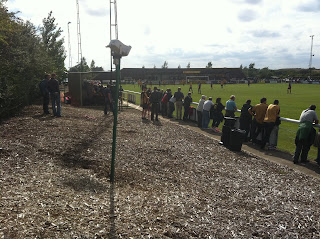 The teams come out to Beady Eye's number 31 chart sensation 'The Roller' (I'm not linking to it - it's shit) and in less time than it takes the 7" single to revolve we find ourselves two nil down thanks to a defence with gaps in it bigger than the windows at Liam's 'Pretty Green' shop last Tuesday night. 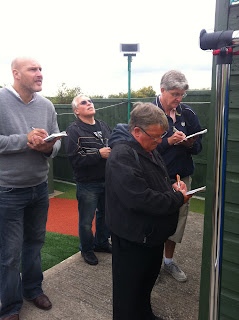 Gotta get them team line up's down properly.

Leamington's manager, Paul Holleran, a man of tiny proportions and a face redder than an embarrassed tomato celebrates while Brendan King is left with a lot to ponder. Not least why he's got changed from his suit into full training kit, including socks! Stephen 'Condor Ferry' Reed reduces the deficit by slamming a free kick past the keeper's hand. In his defence he appeared un sighted and the shot, like Leamington's ground, seemed to appear out of nowhere. 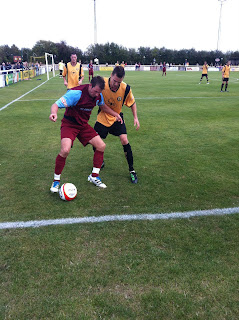 For most of the second half we looked fairly competent, but were as threatening as a yoof using wood chippings to smash a window whilst attempting a looting rampage at an out of town JJB sports. There was a Wooleaston corner that went close to going straight in and eh....that's about it and, like Shed Seven and last weeks blog favourites D:Ream, our comeback wasn't really on and Leamington scored two more before the end. 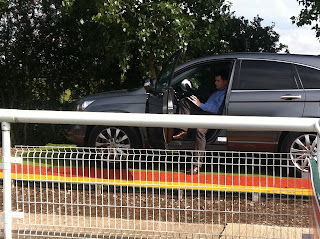 A man too lazy to get out of his car to watch the match. Not quite as impressive as the guy in this blog though.

After some fairly decent performances we have only picked up one point from nine and it remains to be seen quite which direction we head in this season; the leisurely drive along the road marked 'mid table mediocrity' or hitting reverse and slamming into the Evostik Southern.
Posted by Kenny Legg at 09:23