Plumbing of new depths leads to discovery of new species of WAG.

Highridge United FC v Chipping Sodbury Town FC
Saturday 30th January, 2010
Surridge Gloucestershire County Football League
The Creek, Sea Mills, Bristol
Attendance: 16
What better way to work off a hangover than a leisurely riverside stroll followed the Toolstation League football? Granted, bacon sandwiches, pies, fizzy cola bottles are also good ideas but I've overlooked them in favour of the previously stated option outlined in the first sentence of this latest tedious blog. Bristol Manor Farm v Bitton in the Toolstation Premier is my choice of game today, with the Manor Farm website confirming a 3 o clock kick off at the picturesque Creek ground. In order to check the game is on I telephone the club and receive the jovial greeting "Bristol Manor Farm, a happy place" and confirmation that the game is on and that it is infact a 2pm kick off. The idea of a leisurely stroll is quickly forgotten about and becomes a torturous march with alcohol oozing out of my overweight body, finally The Creek comes into view and I'm only ten minutes late. 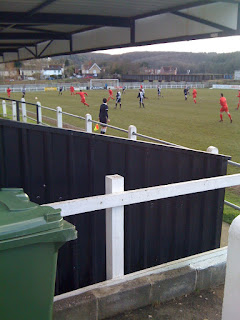 Now, this is where it all gets a bit weird and I still have no idea how this happened. On paying my entrance fee, strangely reduced to £2.50 from it's usual £5 I pick up a programme and realise I am infact now watching Highridge United v Chipping Sodbury Town FC in the Surridge Gloucestershire County Football League, a new low in my tinpot watching. Obviously I cant ask anyone as to why I'm not watching Bristol Manor Farm v Bitton, the fact that Ive not got anything else to do on a Saturday afternoon is embarrassing enough but to admitting to others that I'm somehow at the wrong game would be painful. Even the BMF website says that they will be playing at home to Bitton on Saturday 30th January at 3pm. Anyway.... 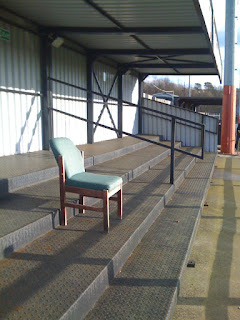 The Creek is an all seater stadium. 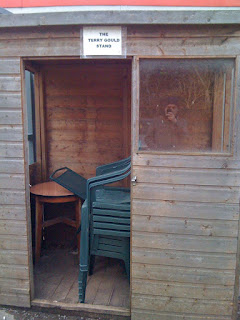 A fitting reward to Terry and all his hard work. Eh....

The crowd is a bumper 16 and I don't notice any other confused looking Manor Farm fans, however there is one spectator who looks spectacularly out of place. It seems that the WAG culture extends all the way from Alderley Edge and Baden Baden, right down to level 7 of the non league pyramid and sat on her own camping chair is one very lonely tinpot WAG. Sadly the picture below doesn't do her full justice, you cant make out the bleached blonde hair, the little Chiwawa dog or the fake tan. Not for her the glamour of the Premiership, the multi millionaire lifestyle and the Hello sponsored wedding and for that I say good on you! You did look a little bored though. 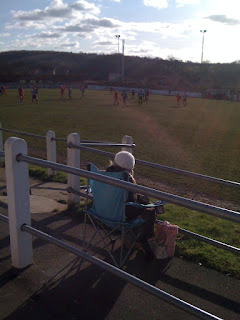 Um, the match. As you'd expect pretty poor but entertaining none the less, none more so when I make my way round to the dugouts side of the ground and listen into the tactical genius of the Chipping Sodbury manager - some insights into his tactical genius, are displayed below for the benefit of any aspiring managers reading:
React
Squeeze
Raise it up
Come on
Seconds
Drive it on
Big efforts
11 captains
Can't hear no one (A clear double negative)
Luke, open your mouth
Watch the ball (Good idea that one gaffer)
Talk!
Fucking talk!
Nice and tight
Inspirational stuff and it makes clear that the ability to talk and watch a ball is paramount to footballing success. 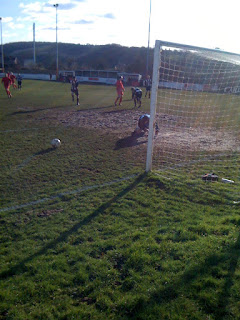 You've got to take your chances at this level.

By being by the dugouts I also get to hear the referee deliver a number of bollockings to the lively Highridge bench, one particular lecture culminating in a substitue being told in a broad Welsh accent to "Sit down, that is the rules have a nice day" before waddling back to the centre circle from where he has officiated most of the game.

In the end Highridge do what you have to do at this level and take their chances and record a 3-1 victory. The 16 fans make for the exit, the WAG packs up her camping chair, scoops up her chiwawa and another afternoon spent at tinpot football draws to a close.