From Despair To Where? Hungerford at Home.

Taunton Town 1 -3 Weymouth
Monday 19 September 2011
FA Cup 1st Qualifying Round Replay
Wordsworth Drive, Taunton
Attendance: 270
Saturday's 0-0 draw with Taunton Town in the 1st Qualifying Round of the FA Cup has been described as dismal, diabolical, absolute crap, terrible, awful, depressing and nicely summed up as "Low on excitement, low on inspiration, low on fans. Terrible."
The magic of the FA Cup hey.
Even the most dedicated fans are turning their backs on the club. This quote from 'Rob' on the Terras Talk forum offering a brilliant summation of the way most fans approach matches now " I've currently a lethargy towards the club at the moment. The memories of jitters and nerves when trying to hang on to a lead are long gone, as are the feelings of jubilation and joy when we scored. We've barely a player that we can connect with - especially since they don't seem to last that long - and the management team fills me with no enthusiasm whatsoever. It's all so dull."

Depressing times then, not that it's affected me in the slightest though.

In preparation for the replay I spent the day alone in a disused and dank church basement dressed as Joel Kitamirike and watching a three hour looped VHS recording of Andy Harris' header on a flickering black and white TV. Occasionally I stopped to flagellate myself with one of Stuart Douglas' dreadlocks, adorned with sharpened rusty barbed wire, discuss the early EP's of Interpol with the ghost of Jefferson Louis, carve the word CU*TIS into a starving rat before finally subjecting a rudimentary voodoo doll of an unspecified businessman from the Cambridgeshire area (made from half a rake handle, a fire damaged medicine ball, three quarters of a mouldy quiche, several abandoned spiders webs and the evil imagination of a disturbed mind) to a relentless period of water boarding. 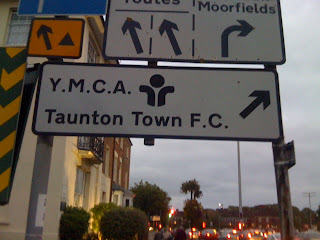 I said young man, there's no need to feel down.
There is.
If I was looking for omens (which I was) that could also double up as some weak thread for this blog (which I was) then AC/DC's ‘Highway to Hell’ booming out on arrival to the ground was one I'd be clinging to. The fact it was played again just before kick off had me rubbing my hands with bloggy glee. Consider the depressing scene darkly set.

Taunton Town HQ (really - there's a sign out front that says so) contains a superb boardroom facility. I say facility, I mean shipping container. The partly open door offering a tantalising glimpse into the prawn sandwich world us mortals can only dream of. Well dream no longer tinpot fans as I am able to reveal it contains a massive lampshade, the size of Jorge Diaz, and a 1970s style tattered armchair which means the 'Boardroom' and looks very much like the Duckworth's living room, if they’d lived in a shipping container in Somerset. 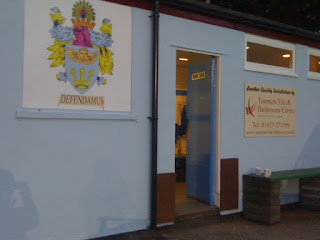 2 doors down from the Duckworth's. Mavis & Derek's maybe?

Both teams walk through the farmyard gate that separates the dressing room complex, I say dressing room complex I mean Portakabin, from the pitch and Weymouth immediately start by knocking it round nicely and we look like a team playing a lower league side. I'm shocked. As the sun descends the fog of depression lifts further when Sam Malsom spins and thumps home the first goal after 12 minutes. Soon after though some more shocking defending sees Taunton equalise and the surely the rest of this miserable drivel will now write itself and lead to a 'Black Swan' style conclusion? 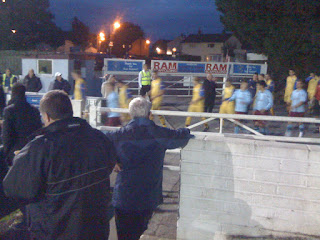 Well, no. Thankfully not. The first half is enjoyable, with some decent football, a competitive spirit, crunching tackles, both teams wasting chances and this feels like a proper football match. This feeling is increased by a superbly ramshackle old ground that resonates atmosphere, unlike the muted dull surroundings of last week at Cirencester.

Sadly a fire in the Taunton Town HQ Clubhouse during the summer has meant the toilets are out of bounds and that means one horrific thing – the overused football ground portaloo. After the half time rush...well I’m not saying they stank but the Glastonbury Festival phoned up to complain about the stench. 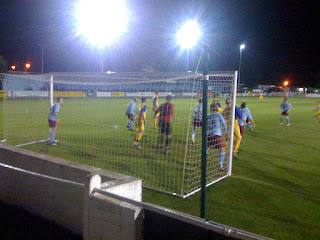 Token match shot.
The second half is, unlike my earlier water boarding session, keenly fought. Weymouth hit the bar from a free kick and the resulting break away leaves us two on two at the back, thankfully we don’t concede but goalkeeper Tom Manley almost combusts at the lack of defensive cover. Thankfully Malsom manages to slot home a second on 62 minutes and half the team pile on him in celebration. A Taunton full back sees these as the opportune time to pick a fight with one of our players and only a swift “fucking get in there” full in his defeated face from one of our players stops him pursuing his act of folly even further. 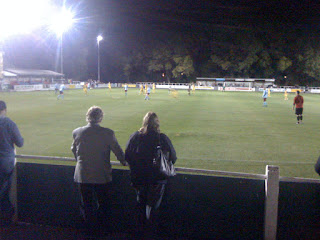 Turn on the Bright Lights.
Malsom gets his hat trick before the end and then the last few minutes are almost like old times, the ball is passed around crisply, ole football almost, the opposition is beaten and Weymouth walk back through the farm gate to a hero’s ovation and the evening’s anti-depressant medicine has been successfully administered.

Now, someone fetch me an old cereal box, cardboard, tinfoil, scissors and a picture of the FA Cup. We are going to Wembley!

Nurse!!
The medication is wearing off!! He’s asking when Steve Claridge is coming round to rotate the shin pads and shouting that he is Narada Barnard’s dog. Nurse! NURSE!!
Posted by Kenny Legg at 12:21