"I want Avram Grant shot. I want to see him executed in the main square"

Why the hatred from our man in Belgrade? After all Partizan secured their fifth Championship in a row last weekend with three games remaining. It's because Partizan have just lost 0-1. To hated city rivals Red Star Belgrade. Their third loss to them in the last 6 weeks. 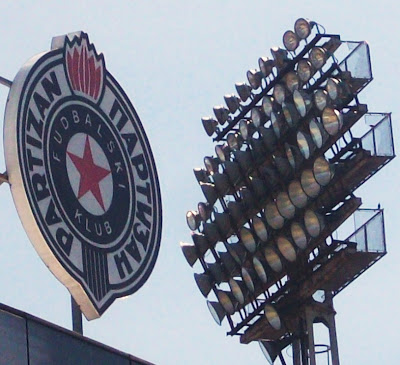 The Belgrade derby, the Eternal Derby, is one of the most intense rivalries in the world, even the Daily Mail says so and the Guardian went with "whenever the two teams meet the atmosphere is rancid with hatred and aggression." Comments like that and scenes like this from the previous league game mean it didn't take a lengthy discussion before me and my blogger type companions, Stuart Fuller, Andy '6 a day' Hudson and Danny Last (retired), had booked flights with Europe's most leg room unfriendly airline to get ourselves to the game.

All around the streets stand numerous small groups of police, shields raised, guns strapped to legs and ready for trouble. Prior to the match there was trouble away from the ground, with one fan receiving a broken leg but we had an easy walk to the ground involving minimal security checks. 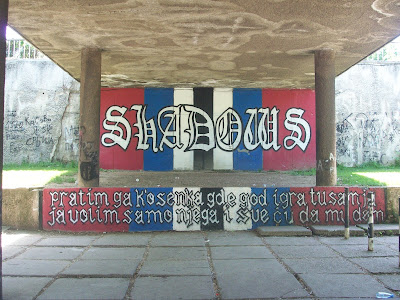 
We bundle into the ground shortly before kick off. There's no time to look up and survey the scene, the waves of the crowd dictate where you go and washes you ashore atop of a seat where you stand for the match. Sitting isn't an option, singing, shouting and gesticulating wildly are your default settings for the next two hours. 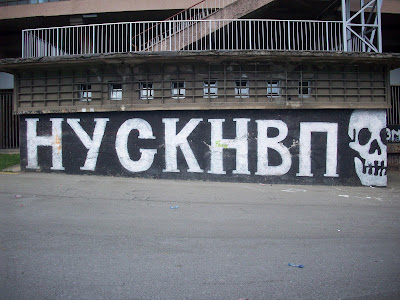 To the left, on the south stand, are the main bulk of Partizan fans, collectively know as the Grobari (The Gravediggers). They're all dressed in black and white, all singing, all bouncing. The perimeter fence is covered in the flags of different fans groups like Shadows, South Guard and the main ultras group, Alcatraz.

We find ourselves in the east stand amongst a growing collection of smaller fan groups, called Zabranjeni (The Forbidden) who are against Alcatraz, who they accuse of co-operating with police and exploiting the club for their own financial benefits. This conflict has often spilled over into violence, none worse so than last year when 20 year old Zabranjeni member Ivan Perovic was shot and killed.

To our right, some Red Star fans have climbed the fence and are posturing towards the Partizan fans before being beaten back by riot police. There is an impressive amount of Red Star fans, collectively known as the Delije (which loosely translates as the Heroes), although the total attendance is about 5,000 below that of the cup game at this stadium 3 weeks ago. 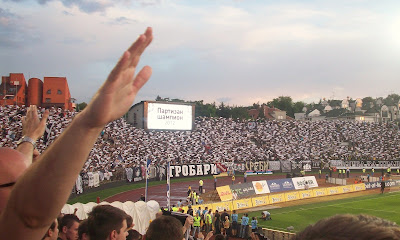 
As the teams enter the pitch black and white signs are held high by the Grobari, black and white balloons are released on the pitch and a banner stretching the length of the north stand is unfurled by the Delije stating, "The gypsies salute their champions". The gypsies being an often used derogatory term for the Red Star fans.


From then whole stands shake as the Grobari and Delije bounce to the demands of the bare chested men barking orders, chants are passionately sung and Red Star are first to stop the game as an impressive display of flares are launched towards the pitch. In the AiT rule book pyrotechnic is most definitely not a crime. Fireman mince around the running track carrying the flares at arms length before dunking them into buckets of sand, or tossing them into the water jump of the steeplechase, but there's no extinguishing of the unrelenting atmosphere. 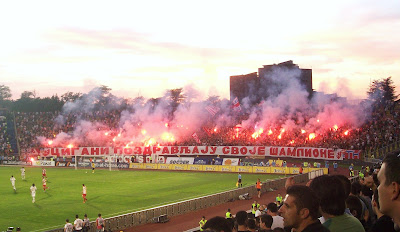 Down with this sort of thing.

Both sets of fans take in turns to unfurl insulting, or nationalistic, or something about Barack Obama banners in cryptic Cyrillic. We dance around on the orders of the Zabranjeni capo as he orders everyone to sing a bit of Just Can't Get Enough by Depeche Mode. Of course Depeche Mode. We shit ourselves as fire crackers land a few rows in front of us and the Red Star players are pelted with objects as they sprint off. It's easy to forget there's a match on. It remains goalless at half time. 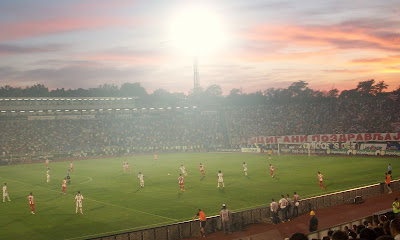 
5 minutes into the second half we get the nod, the flares are imminent. Two minutes later thirty yellow and red flares are being waved all around us, a cloud of smoke grows, play stops as the flares explode on the pitch, more are lit and rain down forcing overworked firemen to scuttle on to remove them while the thick smoke gradually drifts away over the floodlights. After a year spent watching teams play in front of two dysfunctional groundhoppers and a bored dog, where the nearest I get to seeing a flare is watching an old boy strike a match to light his pipe tobacco, I make no apologies for being a little aroused at this. 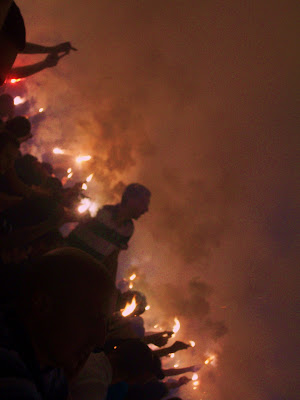 How was the atmosphere at the FA Cup final? 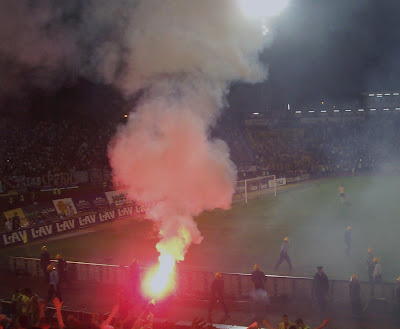 Look out Fireman Savo! It's coming your way!

All through the second half the game drifts, while the atmosphere builds and builds. Seats burn in the Red Star end, the two sets of Partizan fans deliver chants in unison to inspire their team and/or (more likely) insult the Red Star fans. The Grobari light more flares forcing firemen to scuttle into action again while and we all explore more camera functions to capture the perfect shot of 'mental Serb with flare in hand'. 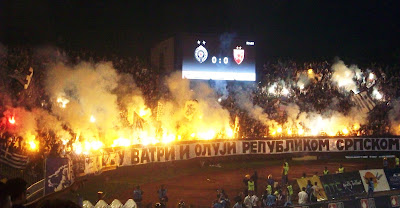 Flares up if you hate Avram.


On 93 minutes there's pandemonium in the north stand. Cadu smacks in a twenty yard winner for Red Star. The noise is incredible, the fans in the north stand surge in delirious elation, the management rush onto the pitch and goalkeeper Balkovic leads the charge of celebration towards their fans. Meanwhile Partizan sub, Nikola Ninkovic, breaks down in tears.


The final whistle sounds shortly after and the atmosphere is now tense. Again the Red Star players vault advertising boards to be with their fans, their fans rush towards them and a few break onto the running track and the pitch, including one man dragging his daughter with him as he gesticulates at the home fans. Furious Grobari barge past us to get near the invading Red Star fans but, thankfully, the police are soon out to stop them getting any closer to the pitch. Newly installed Red Star legend Avram Grant stands impassive, arms folded and distant from his players as they gather in a huddle to mourn their disastrous defeat. 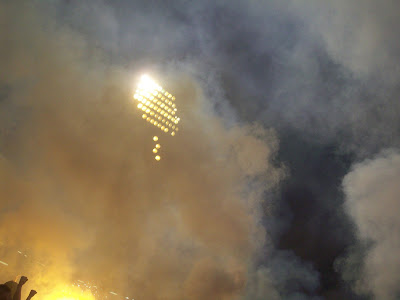 The Red Star fans are now the ones singing "Champione".Today they are the champions of Belgrade This hurts the Partizan fans sparking torrents of abuse, the hurling of missiles and the introductory death wish, from our previously mild mannered host, as they're forced to run off the pitch.

There was nothing to play for in league positions today and were told by this game wasn't as intense as it might have been. *gulps* But being in the middle of this atmosphere, witnessing the passion on the terraces and being amongst the fervour of the fans on the terraces made this trip a privilege. See you at the Marakana next season.

Have a read of Stuart Fuller's match report and why not pop by Danny Last's (*points at eye*) photos.

Special thanks to Nenad, a Red Star fan fluent in Geordie. Whenever you want to come and watch Bristol Manor Farm let me know.