Do you remember the first time? I can't remember a worse time.

Everyone remembers their first football match. The throng of an expectant and vociferous crowd, your nostrils filled with the previously unknown smells of deep heat and Bovril and a whole heap of swear words that you'd never heard uttered before but were going to unleash on the playground masses on Monday. My first game? Boxing day 1987 -Weymouth v Barnet - match postponed. Although sadly we didn't know this until we read a hastily scribbled note on the the locked gates of the Wessex Stadium. Remember, this was a world before twitter, before the interwebs so there was no way of finding out, well maybe the telephone but meh.

Saturday represented the first match in the life of young Florence Gardner, daughter of AiTinpot friend Duncan. In contradiction of my first sentence I'm pretty sure she won't remember this match, what with her being a mere 9 months old and all. Sadly for everyone else who was at the match we all possess the mental capacity to remember it.

We tried our best to make the day special for Florence and what better way to do that than an FA Cup match, the self styled greatest cup competition in the world, and an extra special tinpot FA Cup match at that. No less than the Extra Preliminary round clash between Keynsham Town and Tavistock. No, really. 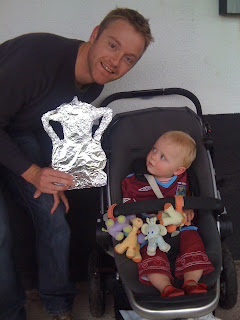 The proud Father. The bemused child.
To give the day even more of a chance of stimulating the neurons in Florence's burgeoning hippocoptus and allow the memories of the day to make their way into her temporal cortex her Father, a grown adult capable of bredding let us not forget, saw fit to bring along a shoddily made replica of the FA Cup fashioned using only the means of cardboard, tape and tinfoil. A doth of the cap in your direction Duncan sir. If this day isn't ingrained firmly in Florences memory banks as her fondest childhood memory then there's really nothing more you could have done.

Sadly due to the shitness of the match she is more likely to spend time re counting this experience to a psychiatrist looking to uncover reasons for her irrational fears of knock out football, groundhoppers and Bovril.

We probably couldn't have looked more out of place as we took our place in the clubhouse, with us being three men and a baby. It was vaguely reminiscent of a scene from that film from the 80's staring Ted Danson, Tom Selleck and Steve Guttenberg about three men and a baby, whose name I don't recall at present.

The undoubted highlight of the day for me was finding the Keynsham Town trophy cabinet, as shown below. 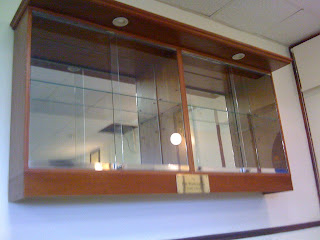 The Keynsham Town (non) trophy cabinet.
As you can see, through the gift of sight, the cabinet is empty. Quite why you would build a cabinet for trophies you haven't won is beyond me. I do not possess a cabinet to hold the bronze medal for the time I didn't come third the womens javelin at the 1978 Commonwealth Games in Edmonton, Canada. An event where I briefly didn't set a new world and commonwealth record by the way. I'm sure there is a reason for an empty trophy cabinet, just in case anyone from Keynsham is reading this, I am fully aware that you won the prestigious Somerset Senior Cup in 1952 and again in 1958. 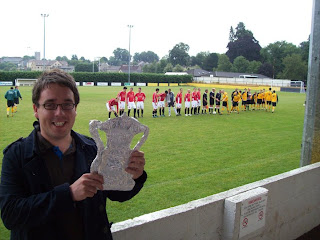 The match? Oh yeah, Tavistock won 2 - 0. Keynsham were bobbins. If you want to know more about it ask Florence, she can remember more about it than I care to recall. 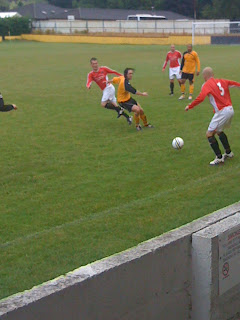