Oh no Korona and Polonia!

Monday night at 6:30 means one thing at AiT HQ; it's time to stick the tele on, devour a Fray Bentos pie and ogle the girls of Hollyoaks. This Monday though things are different, I'm in Warsaw, they don't have Hollyoaks and 6:30 means its time for a football match to kick off. 6:30...on a Monday? *shakes head*
GO!

5:45: leg it out of the meeting room, throw some different clothes on, grab some photo ID, bound into the lobby, shoulder charge a small child out the way, hurdle piles of luggage, meet Kaspar the Friendly Dane, pile into a taxi, point at the stadium on a map, screech out of the car park at a frightening speed and STOP! 5:53 - Welcome to the back of Warsaw's slowest moving rush hour traffic. Arsecakes. 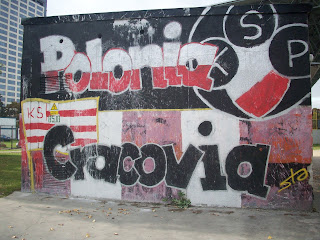 Who doesn't like football grafitti.
There are brief periods of insane acceleration, frantic weaving in between lanes, but mostly it's long immobile periods of realisation that making kick off is as unlikely as the Polish dumpling being the dish of choice of this years Masterchef winner.
With ten minutes to kick off the driver senses our frustration, almost as much as we sense his staggering body odour, and decides to ignore the inconveniences of red lights and junctions as he mounts his ramshackle automobile on the pavement and causes pedestrians to scatter as he stamps on the accelerator! Good man!! To give you some indication of how slow we were previously moving it’s pretty safe to say communism declined quicker than this. Meanwhile, back at the hotel, our colleague Richard gives up trying to re-tune the TV to find Hollyoaks and sets off to do battle with the traffic. ** 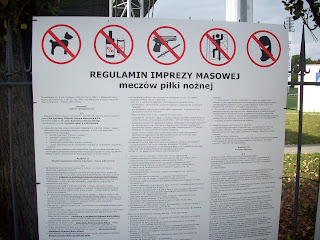 No balaclava's, no guns, no chiwawa's.
With ten minutes of the match gone, the driver attempts to induce another multi car pile up so, with nerves shot and floodlights in sight we decide to sprint, jog, walk quite quickly straight into another queue! A torturous process ensues of showing photo ID, getting our named tickets printed and oh just hurry up Poland!!! There's football going on! 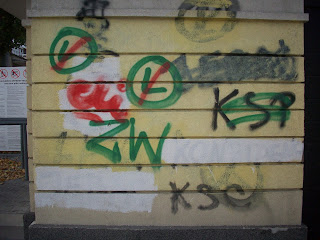 Those red lines mean I can't see that Legia Warsaw grafitti now.
Twenty minutes late and were in and, thankfully, it's 0-0. The small group of Polonia ultras in the pitch side spanning stand opposite are chanting away, the fans in our identical stand are stuck on mute and the ten away fans, an athletics tracks width behind one of the goals away, are strangely silent.
Five, ten, fifteen minutes pass and nothing notable happens on the pitch. The ultras "do a Poznan" in a noble attempt to shun the match, our stand of mutes silently fills up with travel weary Warsovians, there's now twenty away fans and it's debatable whether it's worth the hassle.
There's one thing to tackle the boredom, food and beer. Sadly alcohol is allowed in the ground. If ever I needed a beer it was now. So tonight’s Fray Bentos substitute is one sausage, one impenetrable bread roll, two (2) gherkins (more gherkins in football please!) and numerous molten jets of grease that have left a scorched wasteland where the roof of my mouth use to be. Every bite firing a new trajectory of grease, my hands are covered, my face an inferno and my seat so swamped I had to perform a one man bail out of grease (Bail out of Grease!! Come on ladies and gentlemen!) 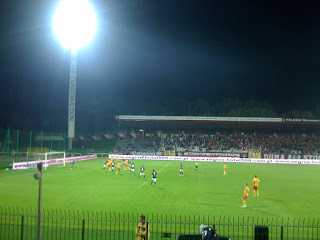 Token match shot.
Like the speedometer on our taxi while navigating inner city pavements the Kielce fans are up to about 80. The banners have arrived and an ear splitting bellow means the Kapo has defeated the traffic and the chants can commence. Half time also signals the arrival of Richard and his travel tales. His taxi driver, controversially, stuck to the roads but did decide to trade punches with an irate cyclist from the window of his cab! Superb stuff! A failure to bring photo ID meant his evening could be stuck in reverse before it had started but he beat the strict ID requirements by showing a credit card and a mobile phone picture of him and his wife on holiday!! What this proves I have no idea! 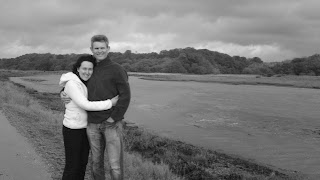 This photo will secure your access to any Polish football ground.
Kaspar and Richard are introduced and all those around us the crowd suffer unspeakable boredom as the match continues in a similar vein, the TV public no doubt now all watching the end of The One Show. Both Ultras occasionally try to spark an atmosphere and the miseries in our stand only liven up once; when there's a strong shoulder barge in front of them. That's right, the highlight of the second half was a shoulder charge.
Not that any of that matters, the three of us swap stories of football matches past and tales of bizarre grounds in far flung foreign outposts as numerous over hit free kicks float out of play and shots fly laughably wide. 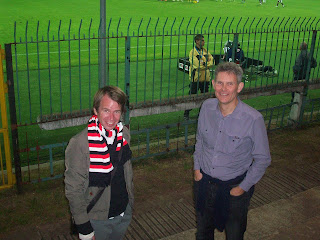 Friends! Football friends!
Unfortunately there isn't a Dignitas clinic equipped to put football matches out of their misery and we suffer on. Kielce are awarded a dubious free kick in the last minute and one home fan overestimates the ability of the player to deliver the decent free kick needed to create a winner and lambasts the Kielce bench. He needn't have got upset, the free kick is lobbed out of play and even the volley of abuse the Kielce subs respond with is mishit. Shortly after there's the magical final whistle and the sprinklers are immediately turned on to try and rinse away the foul stench of the match. 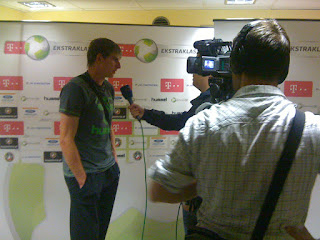 We played very well, it was important to get a result, we're not getting carried away with our league position, we take each game as it comes bla bla bla.
We sneak into the stadium bar, swap more stories over frosty beers, creep into the background of post match interviews, pose for our own photos pitch side and reminisce on this great evening’s entertainment in spite of the match. It's experiences like these that being a football fan is about; making an effort to get to the match, having a laugh with friends over a beer and not sitting at home with your dinner on your lap and watching it on your telebox.
Now, buger off. I've got 3 days of perving at Nancy from Hollyoaks to catch up on. See yourself out.
** I'm sure Richard has never watched Hollyoaks in his life. I apologise for any embarrassment and distress this sentence has caused to Richard and his family. He should watch it though, the birds are well fit! Phwooar!


For some proper reading on Polonia Warsaw have a read of Ryan Hubbard's article over on Twisted Blood.
Posted by Kenny Legg at 12:13