Weymouth FC v Welling FC
Saturday 13th March, 2010
Conference South
Wessex Stadium, Weymouth
Attendance: 405
First off an update from the Bath game our 3rd permanent manager has resigned to spend more time with his managerial clichés handbook and hair gel, 7 (seven) players have left and the clubs and this is farce. This is undoubtedly the worst season of football seen in the towns history, unless you count the abysmal 1993 Weymouth Eagles Under 12 season. (P16 W0 D0 L16 F7 A207). Relegation is a certainty now, however we face a much more important fixture in 2 weeks, away to Malcolm Curtis and HMRC on neutral territory in Chingford. A defeat here and the club could be liquidated, making this potentially the last ever game at the Wessex Stadium.
Earlier this week a Yeovil fan on our forum compared the club to a gruesome motorway crash and it is with more than a little morbid curiosity that I travelled to Weymouth. Having said that this isn't any old car crash. This is a car crash instigated by a man who is an even worse driver than Brian Harvey, a man who somehow who jumped in your beloved car when you weren't looking, gave you a £1 for it, give it a pointless re-spray, sold the wheels, crashed it on purpose
(taking out many innocent bystanders), blocked any emergency vehicles from the scene and continues to drive a monster truck of shit through the crash scene every single day until there's nothing left.
Arriving early I take a wander round the empty ground, the ground I've been coming to since I was 6. There's the gate I sat on as a young 'un, the wall where young Lee and me carved our names in in the mid 90's, the refreshment hut where I have purchased enough Panda Pops and Refresher bars over the years to comfortably write off our debts and the frankly disgusting
toilets, home of a family of nesting birds around the turn of the century. They saw sense and got out, I'm still here. (In the ground, not in the toilets-thats just fucking weird and the wireless signal is awful). 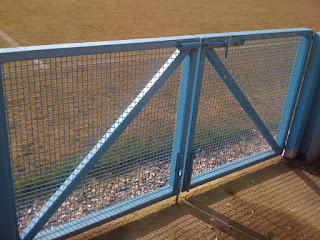 My gate since 1987 when I turned up with a bootbag full of pop and crisps. Now property of Malcolm Cu*tis. Just to the left stand The Book'em's, to the right Farmer John and just behind Young Le(e)'s Dad. 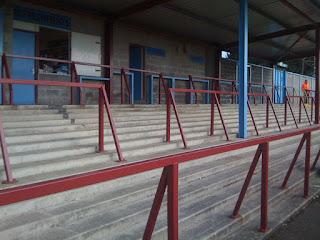 What soup have you got? I'll have a hot chocolate then thanks.
A medicinal beverage is required and make my way to the ridiculous shaped bar, the only bar I'm aware of where the patrons form an orderly queue rather than huddle at the bar whilst waiting to be served. This bar was home to one of the most memorable moments supporting the Terras, when what seemed like thousands of us crammed into the tiny bar to watch us take our place in the FA Cup First round for the first time in 18 years and draw (twice European Cup Winners) Nottingham Forest 2005, we'd go on to draw 1-1 at the City Ground in front of 1800 travelling Terras. Those days are long gone, those fans are long gone and today the bar is eerily empty, the Sky TV long since cut off, the bar largely empty of drinks and an atmosphere like some sort of pre funeral gathering. Looking around the bar its fair to say I recognise about 75% of the people in their, the other 25% are expectant

Welling fans, and not only that I know all their names, well some real names, some aliases from the internet forum and some who have been bestowed a less than flattering nickname over the years. There are so many memories tied up in this pile of breeze blocks, in this group of people and the events that have taken place here that for this club to end would mean so much more to me than just finding a new way to pass the time on a Saturday afternoon and why I have reservations about the formation of a new AFC Weymouth, however it looks increasingly likely I won't have an option. 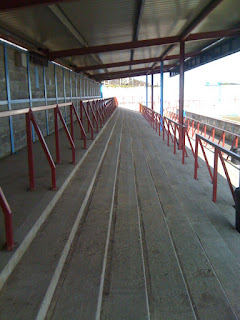 The home end, once upon a time full of fans proclaiming singing "Weymouth 'Til I Die" Now presumed dead.

Today is 'Kids Day' at the Wessex. The now bi-annual event where the club self destructs, the first team leave en masse and the reserve/youth team are sent out for an ass kicking by very grateful opposition and we make a mockery of the element of competition in the league. I'll admit to having tears in my eyes at the last 'Kids Day', as we lost 0-9 at home to Rushden and Diamonds two years ago, as much out of pride for the players who wore the shirt as the terrible situation the club was in and since that day there's been a general numbness in my support. The sense pervades the majority of the fans, gradually they drift in and maintain the resigned look of Zombies programmed to turn up for the inevitable defeat.

As usual 'The Final Countdown' by Europe is boomed out around the ramshackle PA system and (cliche alert) this week really could be the final countdown for Weymouth. ***Continue of cliche alert*** Somehow the lyrics seem a little apt (a little apt once Ive googled them to find out what they are and shoehorned them in this blog)

But still it's farewell

And maybe we'll come back

To earth, who can tell?

I guess there is no one to blame (There is, it's Malcolm fucking Cu*tis)

Will things ever be the same again? (Probably not, we're screwed.)

Thankyou Europe for those vaguely relevant words, may you never defile this blog again. 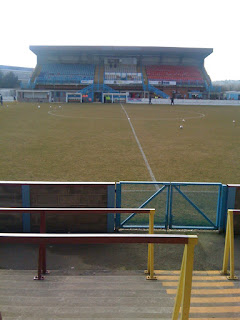 The match itself is much better than expected, the players battle against the mid table opposition and have a couple of half chances, making this one of the better performances I've seen this season. Welling have the vast majority of possession and territory, but a combination of poor finishing, goal line scrambles and some good saves mean that there is no score at half time. The young Terras are applauded off enthusiastically at the break by the fans, apart from those looking nervously at their betting slips after putting money on a Welling victory - we've got previous in betting against our own team.

Welling get their first goal just 4 minutes in the second half and from then are able to play within themselves to beat us comfortably 3-0. We have a couple of chances and if we'd taken won I'd have probably gone slightly mental and celebrated like we'd won the Dorset Senior Cup for the 24th time. The fans drift away quietly at the end of the game not knowing that whether they will push through the turnstiles again. For many though this will be a blessed relief and a chance to start again, I struggle to entertain the thought of an AFC Weymouth, my memories are of Weymouth FC. A Weymouth FC of David Laws, Alex Browne, Willie Gibson, 8-0 wins against Dorchester, Bob Lucas, Don Stevens, Jorge Diaz, Mark Boulton, 0-0 draws against Bashley in the Doc Martens Cup, Ludovic Cadama, Will Flint and Narada fucking Bernard. Good and bad memories but all of them of my team, my club and I find it abhorrent that one man's personal greed looks like it might destroy 120 years of history and so many people's enjoyment, memories and friendships.

I'm off to watch this and have a little cry. Up The Terras. 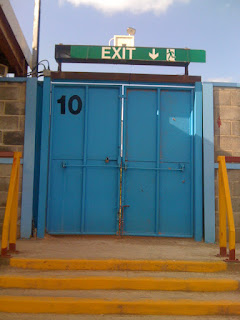 Lets hope its next Exit 2010 for Weymouth FC. Cliche tastic.