Almost a year ago to the day I wrote my first computer internet blog, which detailed my pride in my club at a time when the owners were doing their utmost to shaft it by sacking the Terras legend Ian Hutchinson. One year ago and its deja vu all over again. Except the bit about the blog, I'm not starting it again.
In the interim 12 months we've been taken over by ex Cambridge United Chairman George Rolls. Most non league fans with access to ears and/or eyes will have heard about the time he summoned 3 (three) managers to the Abbey Stadium under the premise that they were all to be unveiled as the new manager and his ability to work an abacus at Cambridge is still the subject of many a discussion at the club. 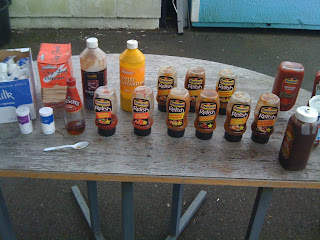 We might be going down but by God we're going to try our best to win the award for 'Most condiments seen in a non league football ground 2011'.

I approached the game with relish. WITH RELISH!! Arff!
Back in March 2010 Rolls negotiated a Company Voluntary Agreement (CVA), which meant that only around £80,000 of the clubs alleged debts of £900,000 had to repaid over a five-year period. So Rolls was then carried through the streets of the town shoulder high? Well, no.

The full list of creditors is shown here and it can be seen that there was a sudden mysterious out breaking of generosity in the Vilnius area that lead to 3 Lithuanians injecting over £290k to the club a. Ačiū, as they say in Vilnius. Many local businesses saw their ability to influence the CVA diminished as a result and support amongst the business community remains low and an air of suspicion surrounds the workings of the CVA.
Add in the fact that the CVA was agreed a day too late to have a points deduction applied to our 2009/10 relegation season, meaning that we started this season with a 10 point deduction and making relegation almost certain and it begins to come clear why Rolls isn't liked by a large number of the Weymouth FC supporter base.
Want more? Links to a betting scandal involving Rolls and the club.

More? A player who was released by Weymouth after slating Hutchinson in the local press then pitching up as a Director of one of Rolls' companies, Able Recruitment (UK) Ltd, a company that was also owed over £6,000 as part of our CVA.
More? Go on then, why not! Pimping out our managerial position for the local cup competition.

There's more, wait. Continual changing of budgets, contract "mishaps", most alarmingly allegations that he has transferred club shares held in trust to his own name giving him control of the ground and allegations he is in cahoots with the property developers, Morgan Sindall who, thanks one of previous distinguished Chairmen, own the land around the ground. Worrying times at the Bob Lucas Stadium indeed. 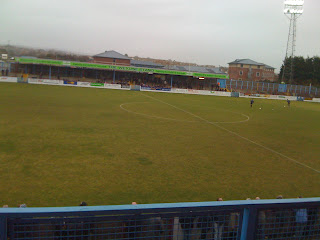 Quick, get the builders in while there's no one here. I reckon we can get a fair few houses on here as long as that pesky football team don't turn up and ruin my plans.

Ah...bollocks.
On the pitch we were struggling, we're going down, but the fans were behind manager Ian Hutchinson. Hutchinson is a hero for many Weymouth fans after signing for the club in 1995, making over 550 appearances and giving the club back some much needed hope by actually winning a few games after becoming manager for the second time in April after his replacement, Jerry Gill, lasted just 44 days with Rolls.
Despite a few spankings this season the majority of fans continued to back Hutch, he represented what was good about our club, represented the town and wore the shirt with pride and represented our last link to a time when we weren't just the object of a property developers lust. So it came as a kick in the ballbags when the local rag, revealed that Hutchinson was to be sacked again. Sadly though no one had the decency to tell him and the first he knew was via the newspaper. 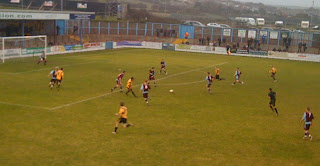 Token match shot
The sacking, and the manner in which it was orchestrated, has rightly upset the remaining Weymouth fans and a fans forum arranged at 5 (five) hours notice this week was said to have ended in a bout of handbags as fans confronted Rolls. A youtube audio clip of the forum is available here.

The clubs internet forum talked of boycotts and of protests against Rolls at the match against Leamington and the thought of this lured me back for the game. Sadly though apathy reigns at the Bob Lucas Stadium and nothing happened, not one chant, no protest, no one balling Rolls out as stood outside the ground selling programmes like the type of Chairman who mucks in and non league clubs dream of.
The Leamington fans mock us "where's your protest gone", probably quite rightly. One look at the Weymouth fans forum would show you that the remaining few fans turn on each other at the slightest opportunity. Divide and rule seems to have been the only strategy that has been successfully implemented at the club in the last few years and there isn't yet a cohesive group or individual for the fans to unite behind to rid the clubs of Rolls.
On the pitch the first half begins as badly as it could. It takes Leamington only 3 minutes to score their first and gives rise to the fear of another spanking. One minute later and the notoriously grumpy home fans turn on caretaker manager Brendan King, “Sort it out Kinger!!” But the team show some fight, despite being clearly second best, and only another Leamington goal right before half time gives a fairer reflection of their dominance. 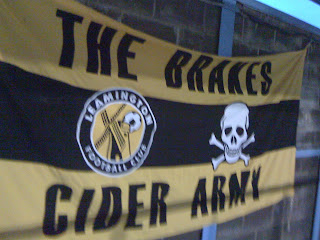 The Brakes celebrated their victory with an all night disco party.
The second half is much more positive, the team battle and although Leamington probably declared at 2-0 at half time the team show some spirit, get the home fans get behind the team, pull a goal back and restore some pride. Hopefully this situation can be replicated off the pitch. There are murmurings of things going on behind the scenes and key fans are busy on the terraces having discussions to influence others and form plans.
I'd travelled to the match in anticipation of seeing another dicking. I'd listened to Kid A on the way down and was firmly set for another dispiriting afternoon, but in reality I came away with a slightly renewed optimism and will not to see the club slowly ebb away. Sadly this got the better of me and I've made a donation to the Wessex Fantasy Football fund that means I will now have to sell my Mother. This fund, organised by Weymouth fan Ian White, sees the fans pay some of the players wages and shows there is a bit of fight left in the supporters and that there is hope we start to see some real progress in ridding the club of those who have put the club in the sorry position it finds itself now.
This excellent article on the twohundredpercent site gives some further explanation of the Weymouth FC story.
Posted by Kenny Legg at 12:42