AiT loves a freebie. Free pen, stress ball, mouse mat, one of them furry things with the wobbly eyes that you don't see so much anymore, so to see free T-Shirts being dished out at the Hong Kong Government Stadium was a grifters delight. However, the comment on just what size I would require to get stretched it over my *cough* robustly proportioned European Asian frame was a bit of a slap in the jowly chops. 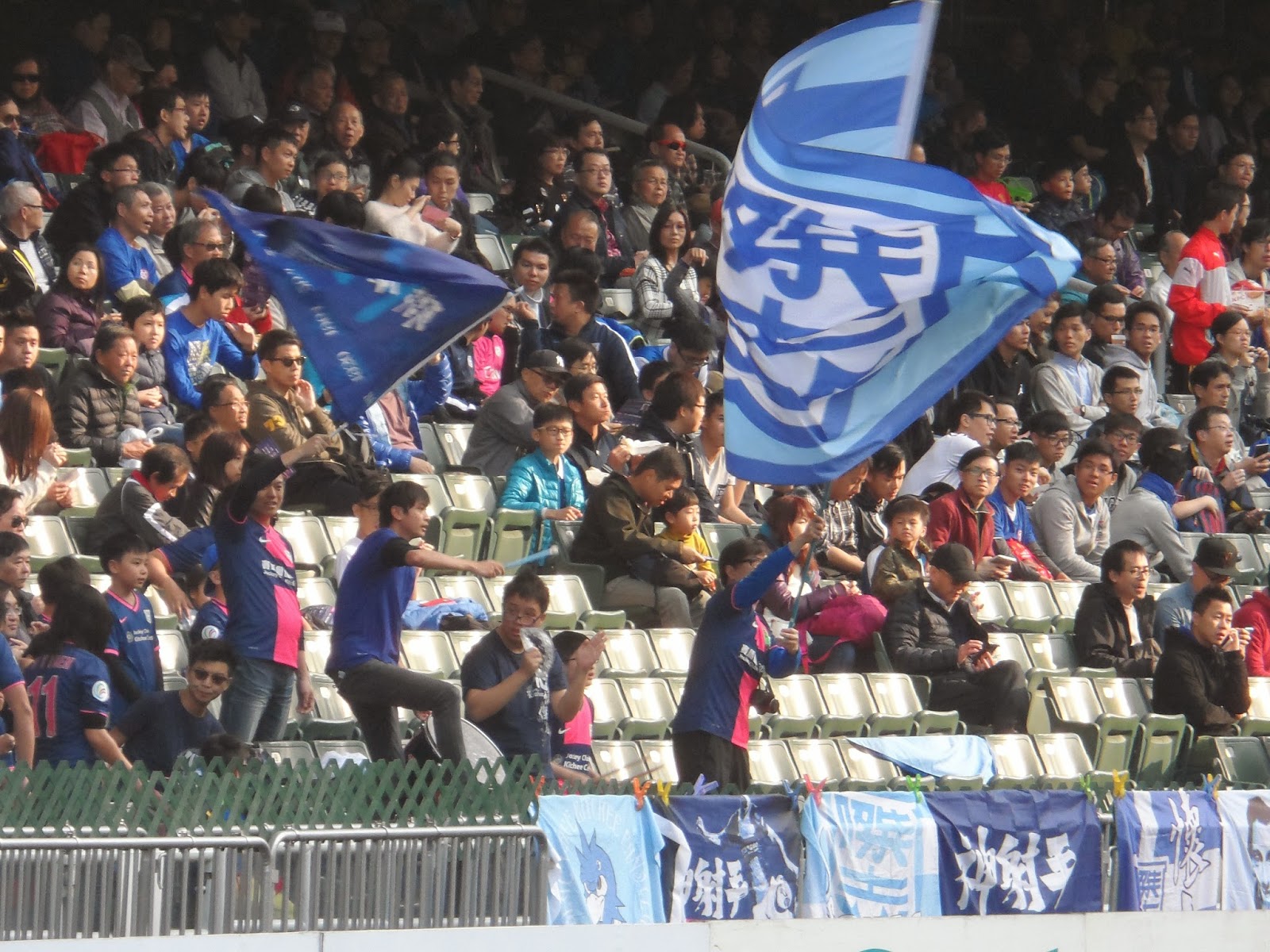 In addition to handing out the ridiculously small T-Shirts Eastern fans were busy painting faces (face too fat), temporarily tattooing arms (arms too wobbly) donning comedy wigs (head too big) and taking selfies with mascots (confusion as to who was wearing a costume to make them look like a grotesque over sized human being and who was a mascot). I waddled off to the other side of the ground, all the way my sweaty thighs rubbing together resulting in an agonising chub rub, towards the low key Kitchee fans. 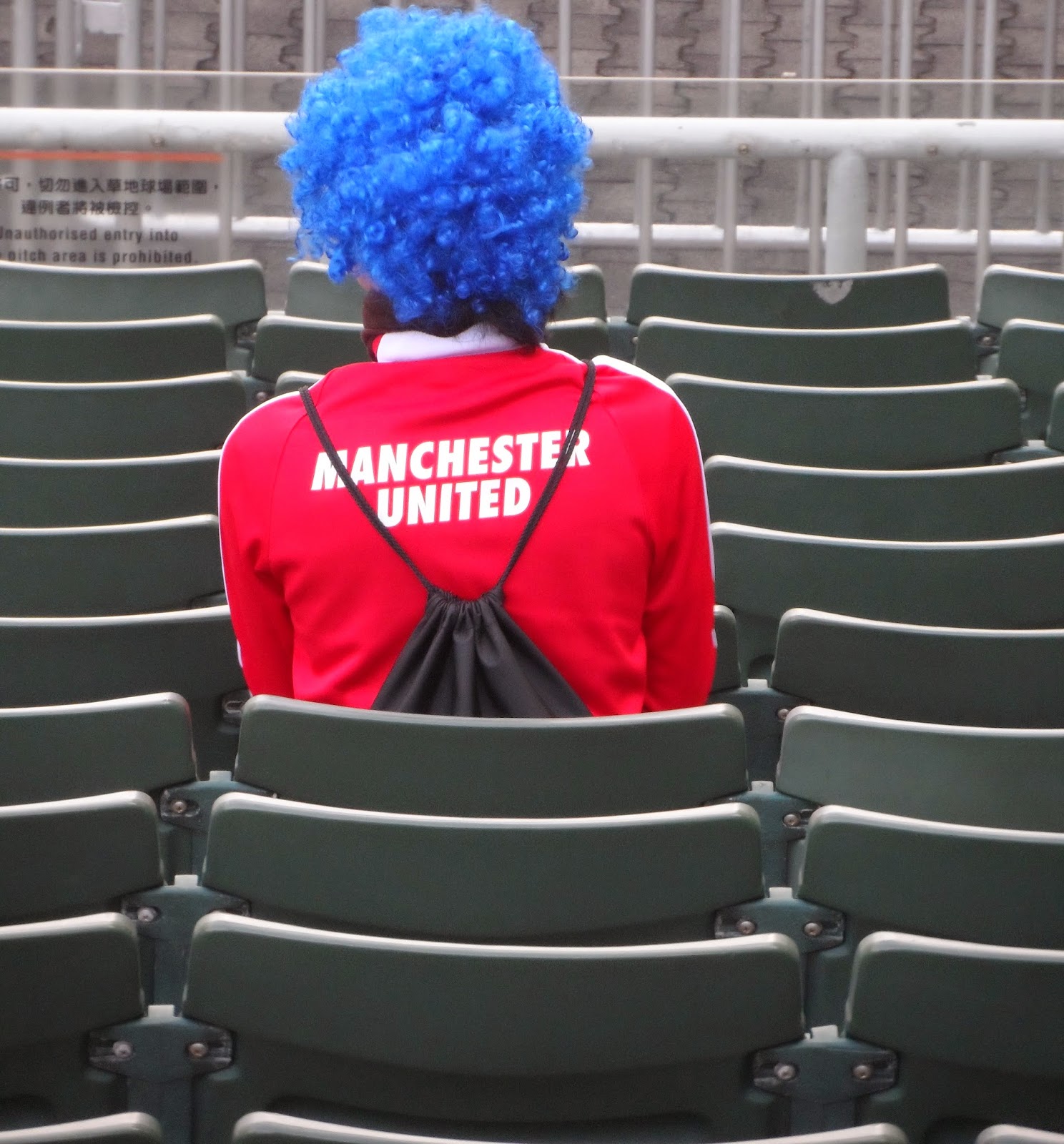 I just don't know where to begin with what's wrong here.


Kitchee fans were selling goods. For money. They don't need freebies, they've already given the world enough, via their club song. The video for which sees four lads bounce around wearing similar, well fitted, T-Shirts, purchased in bulk from the Matalan autumn sale singing an infuriatingly catchy chorus. 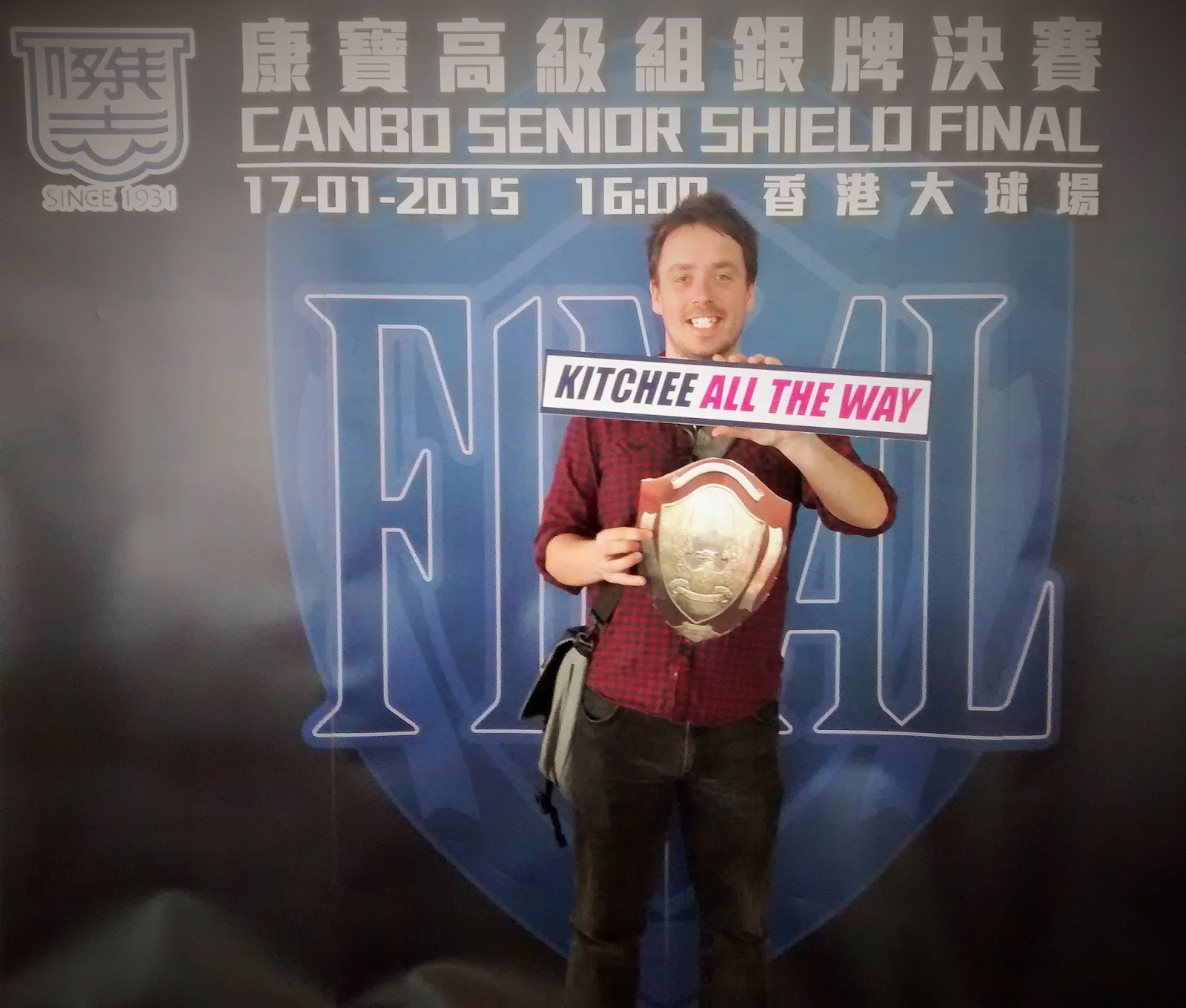 A young, handsome, SLIM, Kitchee fan gets in the Senior Shield final spirit.


I was angry. I was raging. I was eating a chicken burger with large fries. I know wanted a T-Shirt really bad (I'd spilt mayo all down my shirt). This became vitally important to me, even though there is no danger of me ever wearing the T-Shirt, I needed to have one. Breathing in so hard that I could barely talk I wheezily requested another T-Shirt. It works. An XL! I've dropped five T-Shirt sizes. If you are interested in the AiT diet please send a stamped addressed envelope to..... 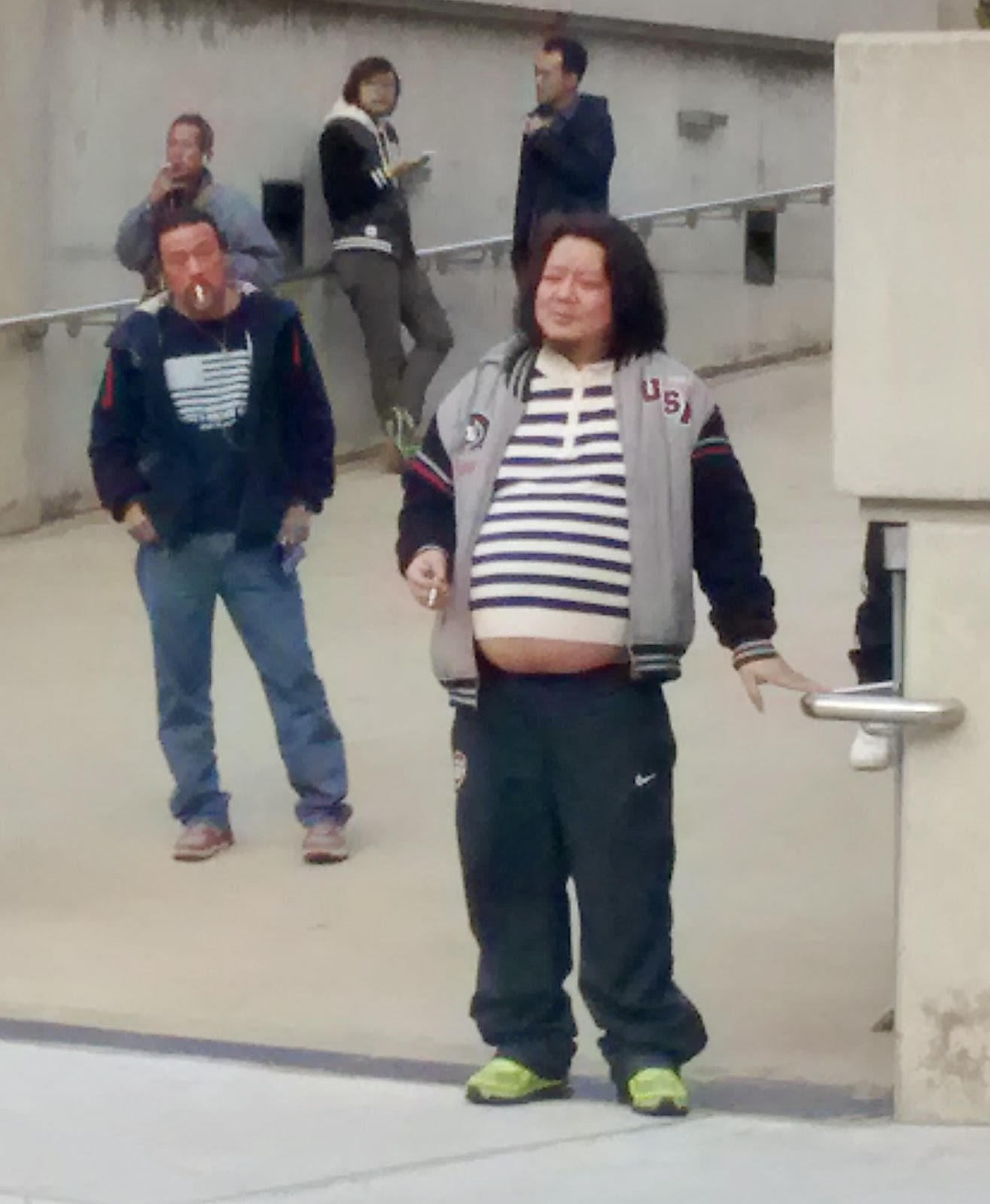 Let it all out, fella. If I'm wearing 5XL then somebody order this guy a moo moo in Eastern club colours.

The reason for this freebie madness, well, it's only the *checks match programme* 2014-5 HKFA Canbo Senior Sheld Final. Yes, I had jetted in especially to watch the match. The names of some previous winners of the Senior Shield are so good that I feel it is special enough to deploy the use of bullet points to convey the comedy goodness. 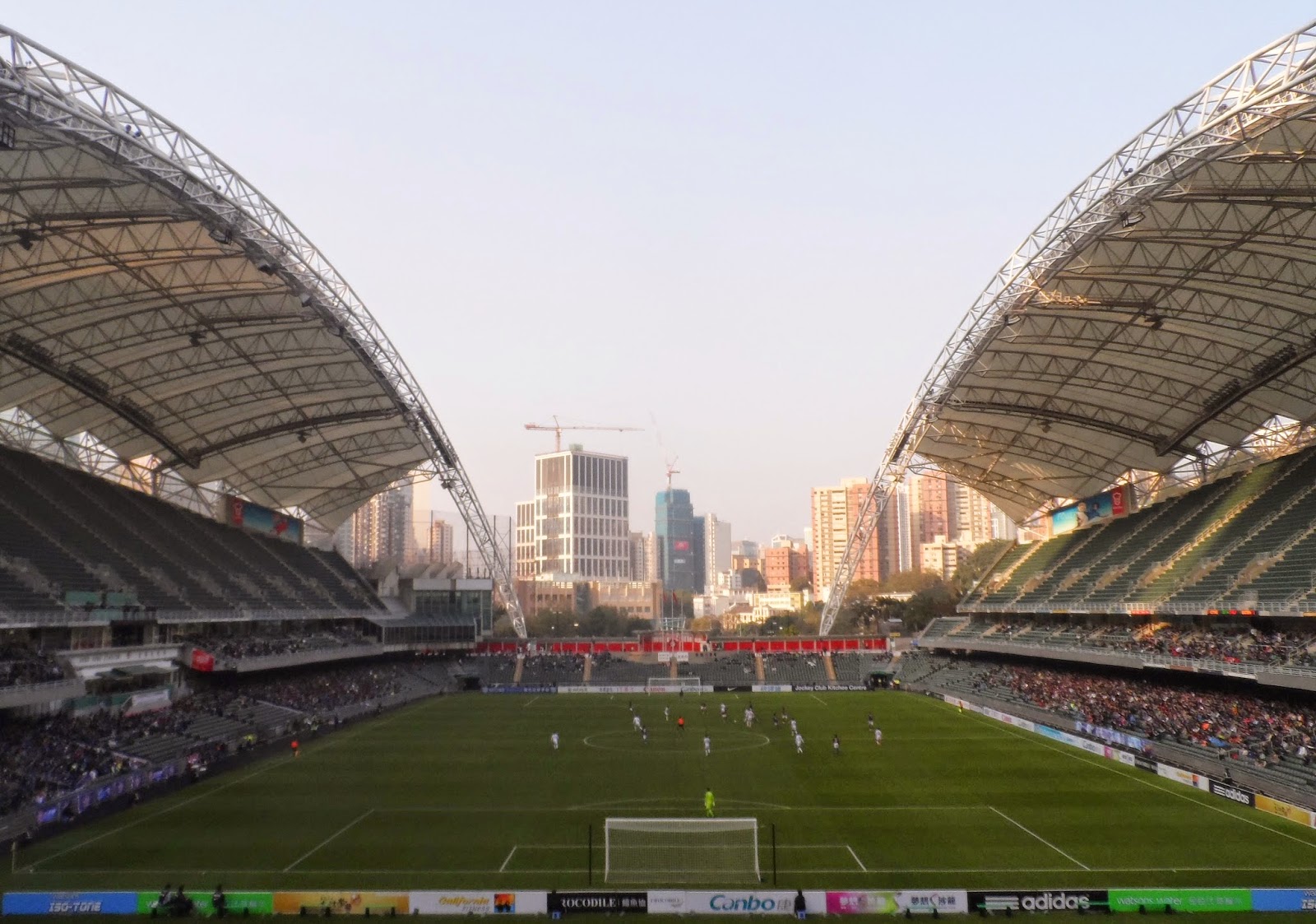 There you go groundhoppers. It's the shot you all wanted to see.


The Kitchee fans, all wearing non matching T-Shirts, raise a flag above their heads, covering their small but vociferous group of fans. They wave flags and chant loudly as the teams take to the pitch and are led by one guy co-ordinating their activities. Nice. 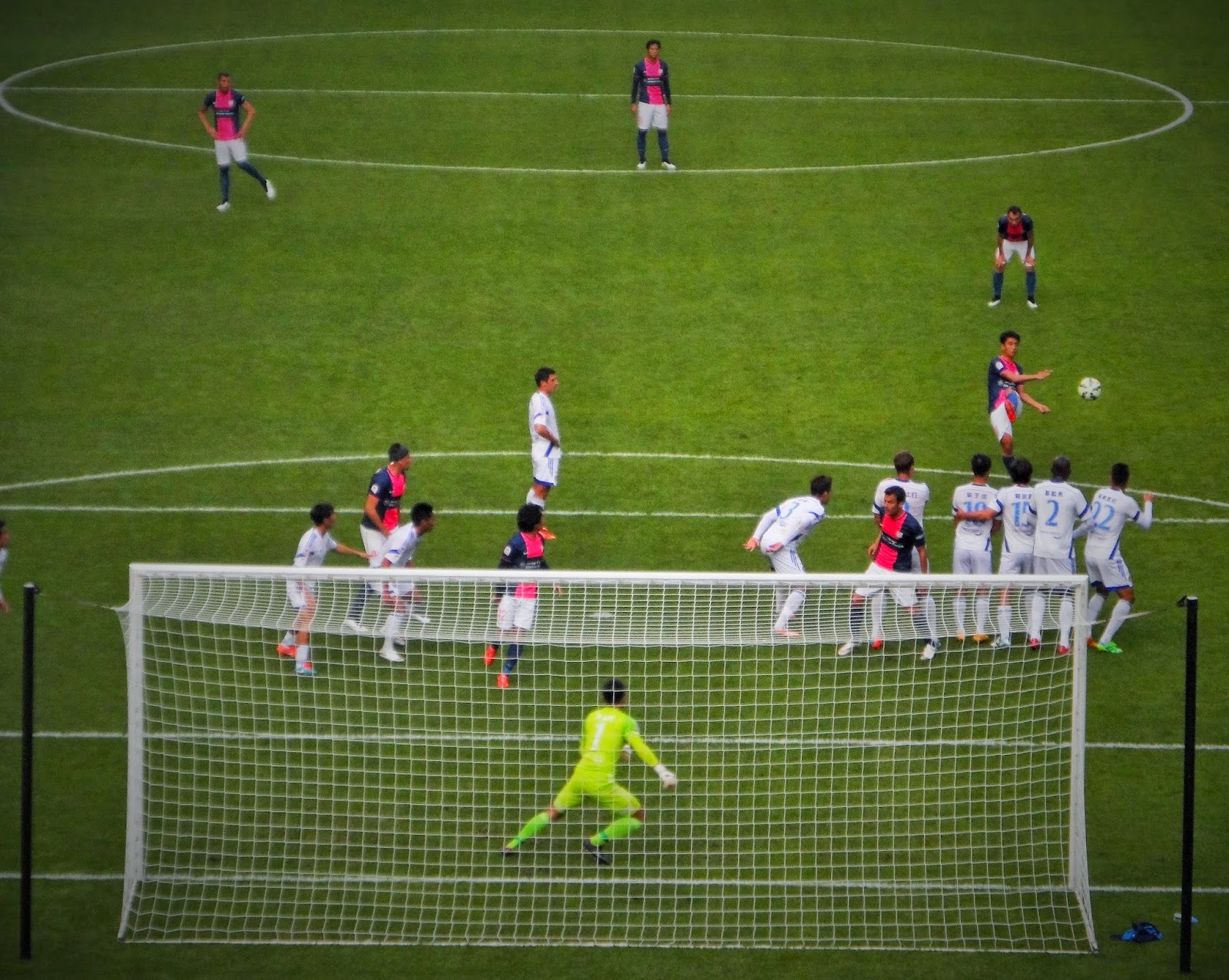 The Eastern fans are all in their perfectly fitting Senior Shield special T-Shirts and ohlookatmearentIwacky wigs. They slap together those air baton things, whack folded bits of card on their hands, shrill loudly, and have songs that are based just on clapping and not actually singing. They have a drum, but prefer to use instruments like a tambourine and others that I've not seen since Year 8 music lessons when we were giving a box of instruments and told to create a soundscape that recreated the feeling of being lost in a forest. It's all massively modern football. All this is co-ordinated by four teenage girls (Edit: The over 16 part of “teenage“ - AiT's top lawyer) in short blue skirts, tight T-Shirts and knee length football socks. One thing is for certain: there is no stopping them. And I for one welcome our new teenage ultra overlords.

I get myself litre of cold beer and have a sit down in a quiet part of the stadium for a while. 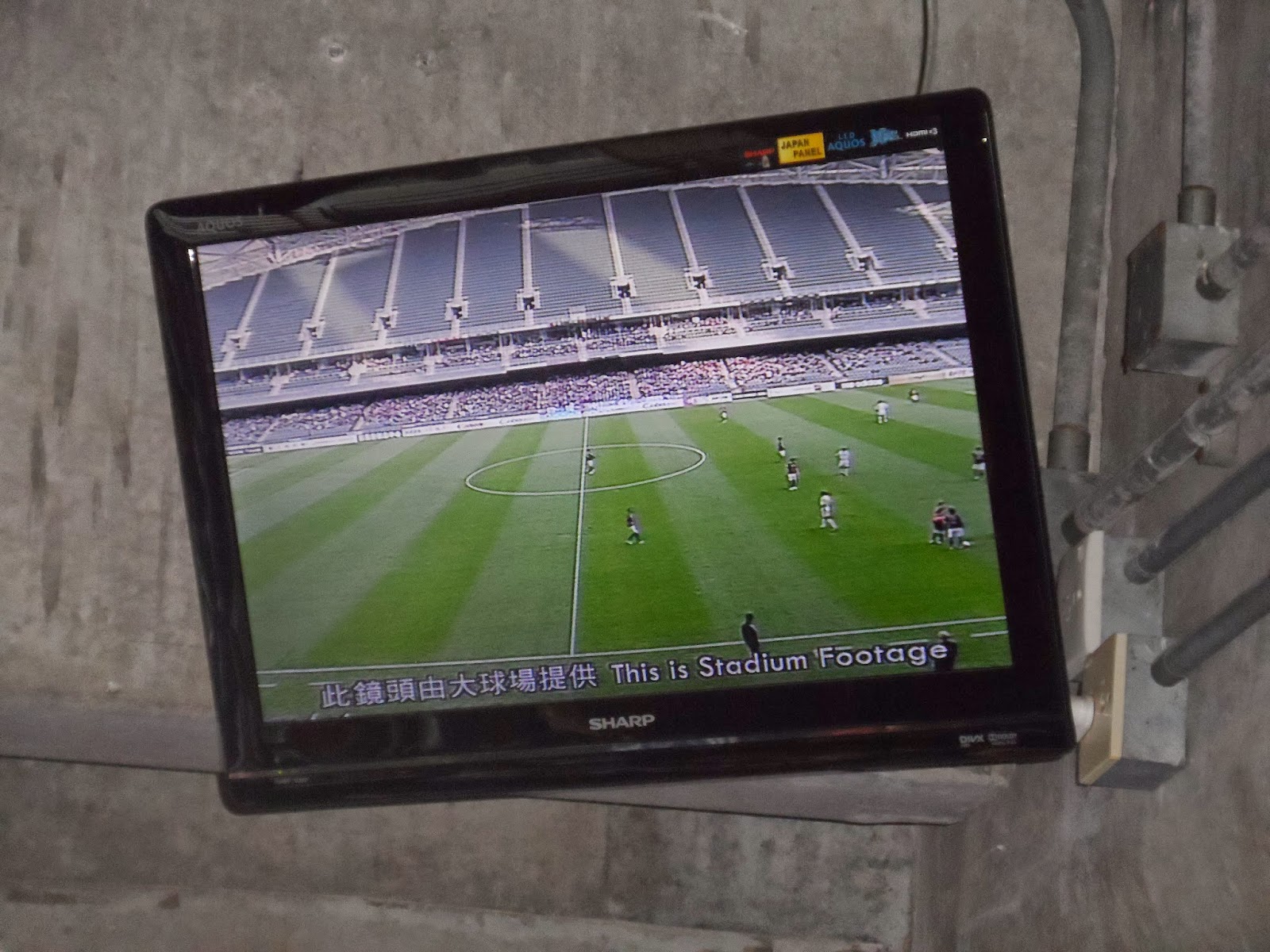 "This is Stadium Footage".  The match you were watching outside, remember? Look! It's the same stadium, you don't recognise it?


Fans from both sides laugh at the replays of the goals, which serve to show highlight the woeful defending. The game has it's own Willie Young/Paul Allen moment when Jean Kilama hauled down/bundled over/chops down a Kitchee striker. The ref gives a yellow. The crowd cry with laughter.

During the second half blue wigs are slowly discarded, old men argue, Jean Kilama gets #cupfinalcramp and the game is accompanied by a racket originating from wood blocks and maracas stamped with “Property of Hong Kong High School”.

Celebrations. Not in shot the tinpot shield.

Eastern's celebrations stick closely to the templates set down in the “How to Celebrate a Cup (or Senior Shield) Win rule book. They bundle on each other (tick), change into T-Shirts commemorating the win (tick) climb a staircase (tick), pass the Cup (or Senior Shield) amongst themselves and raise it towards their fans (tick), sing “Ole, ole, ole” a bit (tick), return to the pitch and celebrate with small children (a new rule implemented in the How To Celebrate a Cup (or Senior Shield) Win – Modern Testament), sing along to “We Are the Champions” as it booms from the PA system (tick), spray a bottle of cheap fizz around a bit (tick), pose for photos behind a large board proclaiming them Cup (or Senior Shield) winners in front of a largely empty stadium (tick) and then pose for selfies with four teenage girls in short blue skirts, tight T-Shirts and knee length football socks. *puffs out cheeks*

Got home. Shoved the T-Shirts in a drawer. Never even taken them out of their packaging. 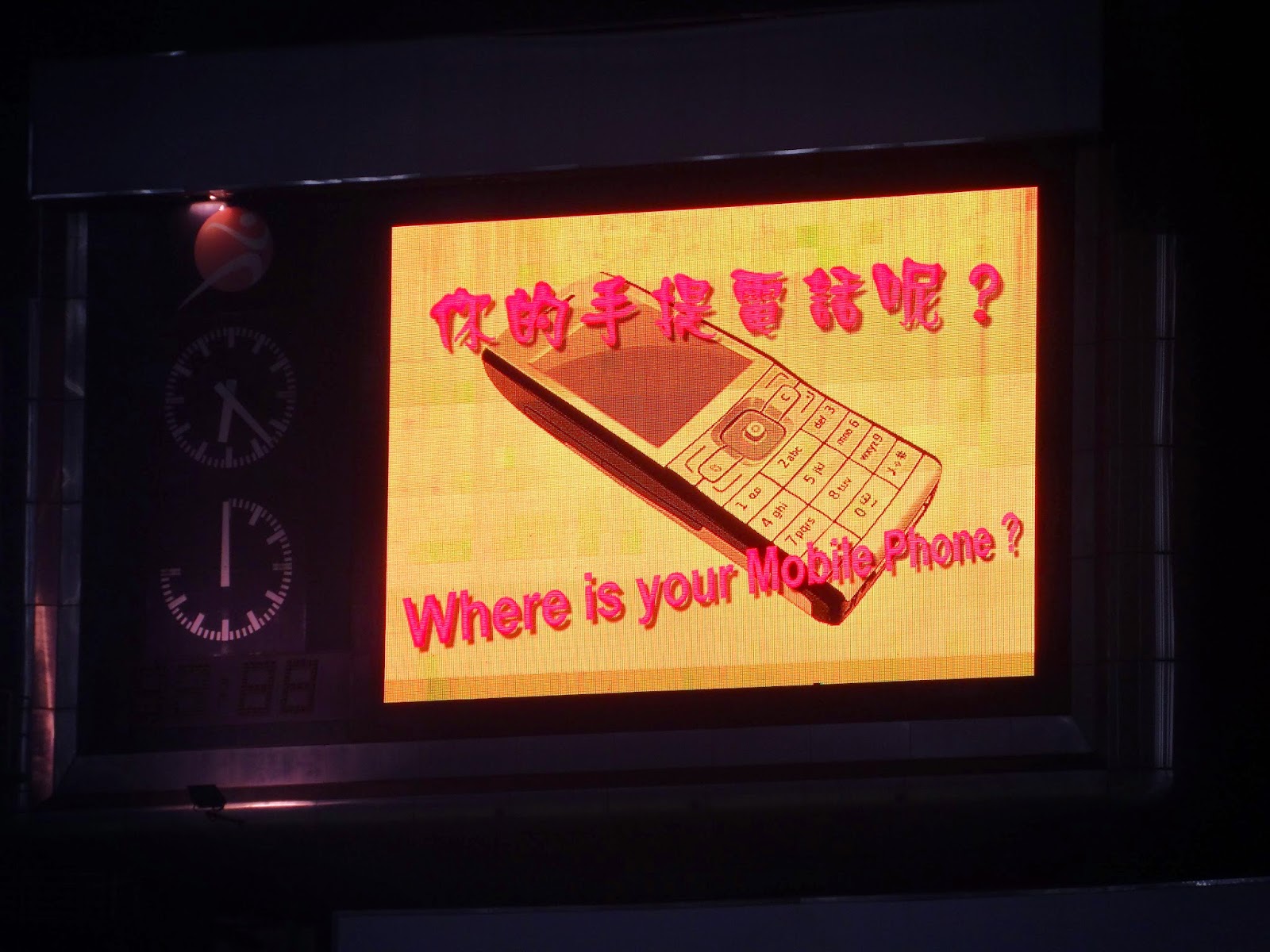 If my phone looked like this I would be delighted if I'd lost it. 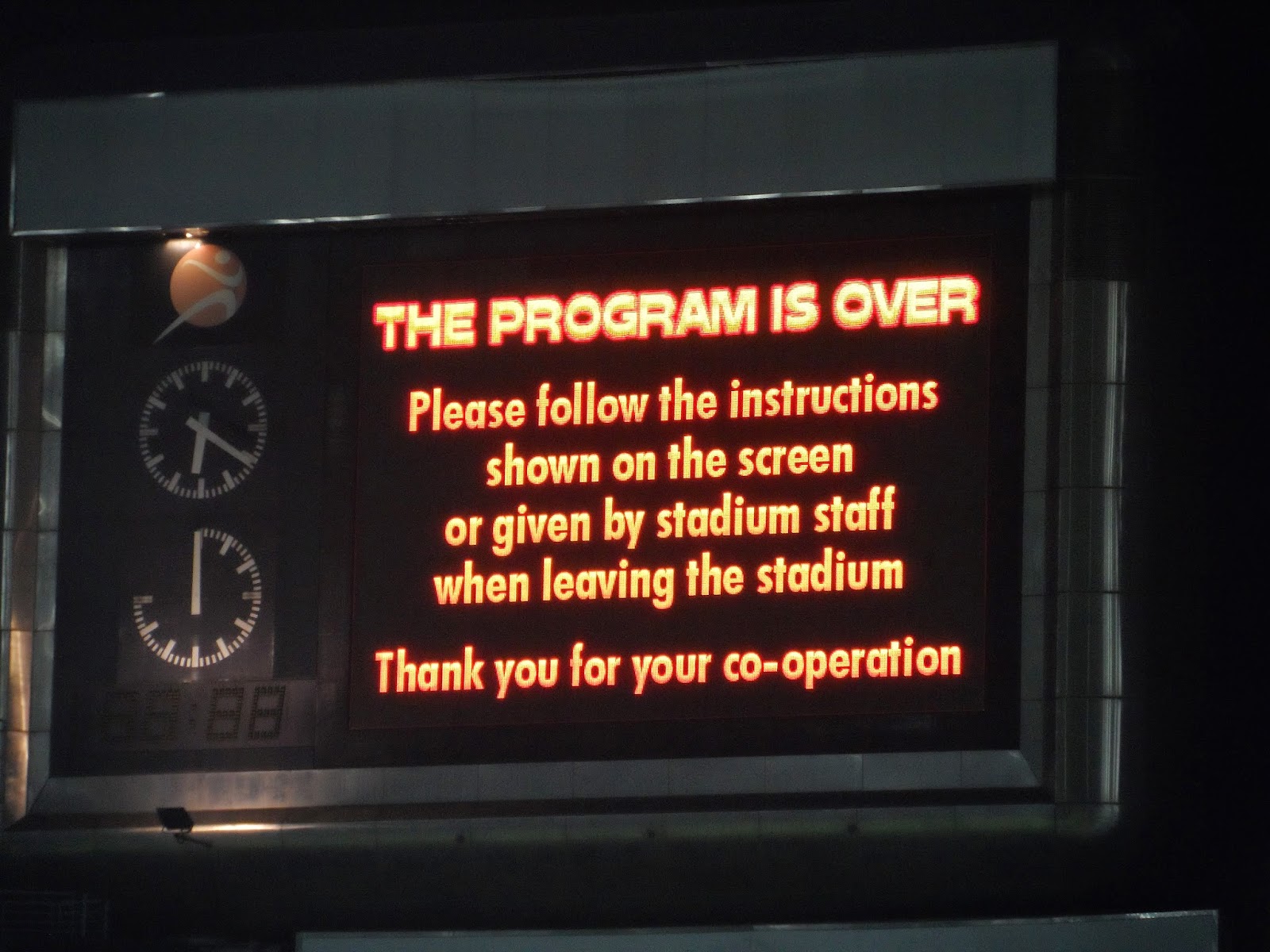