The three months since the end of last season have been relatively quiet by Weymouth FC standards.

Manager Martyn Rogers has left the club; but a manager leaving is about as regular as Stephen Reed leaving the club. So, no one is shocked.

Stephen Reed's has returned to the club. No one is shocked.

The towns folk have a long tradition of celebrating it's regular short stay visitors. For example, King George III came to Weymouth numerous times and had a chalk carving of him done in the hills on the outskirts of the town and a statue erected in his honour. Plans are now under way for a chalk engraving of Stephen Reed slicing a ball into touch to be carved in the hills behind the Bob Lucas Stadium and a static caravan at Haven Littlesea to be named in his honour. It is expected both the chalk carving and the caravan will be more mobile than Reed. 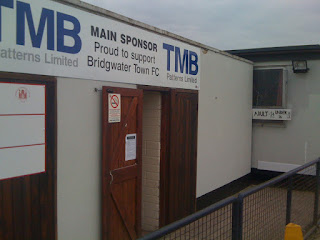 The inspiring facade of Bridgwater FC
It looks like Amanda Rolls is hanging up her oven gloves, sweeping away the pastry brush and leaving the world of preparing imaginary buffets and becoming the (imaginary) Chairman of the club. Again, no one is shocked.

By far the most exciting news item is the shocking news that the supporters might form a darts team! Stick a picture of George Rolls' greasy mush on the dart board and I’ll be a shoe in for the Bully's Special prize of a speed boat in no time. 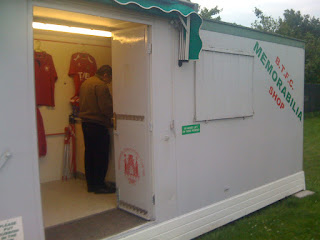 The inspiring BTFC Memorabilia Shop, what wonders could await in here...
On the pitch, off the pitch, and, even more shockingly, on the fans forum, spirits are high. A defeat of a West Ham XI, by three goals to nil and suddenly there's talk of the play offs. 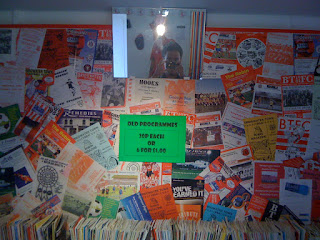 A wall of programmes. A WALL OF PROGRAMMES. A WALL OF PROGRAMMES. Wowzers.
There’s no way you’ll see me getting caught up in any of this undue excitement, no sir! I remember the constant proclamations of us being in false league positions, and able reach the play offs, as we slowly shambled out the Conference. Add in the fact that George Rolls is still lurking around and it means I’ll not only be exercising caution but giving it a full work out, rigorous medical and a unsuspecting finger up the bum. 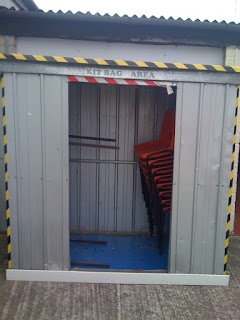 Of course the Kitbag area. Of course.
Things I know about today’s opponents, Bridgwater Town.

1. Mysteriously there is only one e in Bridgwater. By my calculations that's 11 less than Brian Harvey on an average night out in the mid 90's.

2. The town's residents and local paper combined to make complete dicks off themselves recently with a frenzy about an object in a river. It's OK, no one noticed apart from all of the Twitter, the Daily Telegraph, jeez even the Daily Mail got involved with the mocking.

3. Bridgwater Town v Weymouth could have been a league fixture if it wasn't for Martyn Rogers contacts book and a cheque book, of unspecified origin, that combined to keep us in glorious lands of the Zamaretto Premier (RIP)

Walking to the ground the signs were there that this wasn’t going to be a good evening. An old lady, who'd we'd asked for directions, laughed at us balking at the lack of a short cut to the ground and said we could do with the extra walk. “Yeah, sod off love, I’ve enjoyed the close season, I’ve been carrying a knock into pre-season and I could do with losing a few pounds, no need to be so rude as to point it out! How about you go and point at something in a river hmm hmm?!”

Yeah, that's what I should have said, whilst breathing in. 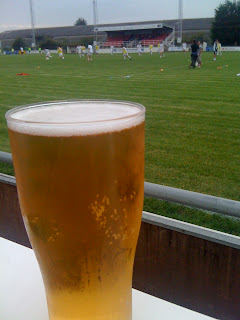 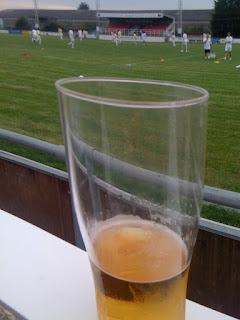 It's like the season never finished.
As a fan the first match of the season is always a welcome occasion. You get to see friends, last years heroes and this seasons bright new hopes….unless you’re a Weymouth fan. 2-0 down after twenty minutes, three nil just before half time, the opposition manager urging his team to “score again, get it, get it, score again” and the opposition fans mocking means there is a depressingly familiar feeling about all this. Our new manager, Brendan King, furiously stomped off at half time with shouts of “you won't make it this year Weymouth, you'll be playing us next season” being bellowed at him. “Sod off Bridgwater…..go and point at something in the rive”…..ah, feck it, you’re probably right.

Repeat after me. It’s only a pre-season friendly, it doesn’t matter. 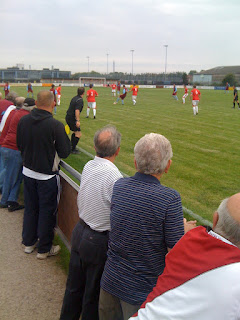 There’s only one thing that’s going to ease my pain in this situation, some classic nineties tunes over the PA, beer and cake. So it was a blessing that The KLF’s ‘3Am Eternal’ was played, a 3rd pint in just over an hour purchased and some free Swiss roll swiped from the bar. More Swiss Roll in football please.

It’s only a pre-season friendly, it doesn’t matter.
Posted by Kenny Legg at 20:18 1 comment: