In the run up to this FA Cup tie Bath City started to receive unwanted tactical advice from a 17 year old in South Korea called Won Jae Yang. Won wants to be the Bath City manager and has clearly been considerable time furiously blurring the lines between Football Manager and reality. 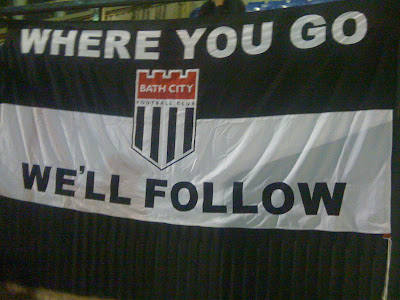 Over 100 (one hundred) emails later, each one containing some fresh madness and it's clear Won is as crazy as an intoxicated squirrel in a wind tunnel. Observe. “the loach Bath City column teams becoming the river team will hang City teams with 4-2-3-1 tactics and to seem, wants and when frankly says and I leave a labyrinth roentgen per hour at one meter in the British soccer world.” 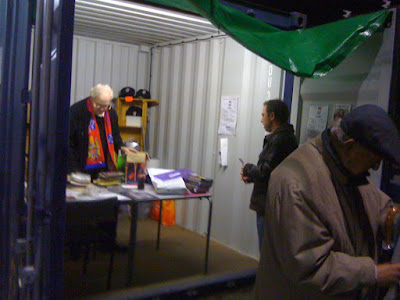 But, maybe he's on to something. Maybe Bath's disappointing season has suffered a lack of “labyrinth roentgen”. Here at AiT we're not going to write him off and that's why we hope to win Won over with this report:

What time is there?

Do you get Hollyoaks in South Korea?

I see you are a big Bath City fan and can’t believe they’ve dismissed your “labyrinth roentgen” idea. Anyway, here’s a report on the Dagenham & Redbridge match for you. I hope it helps you achieve your ambition to become Bath City manager. 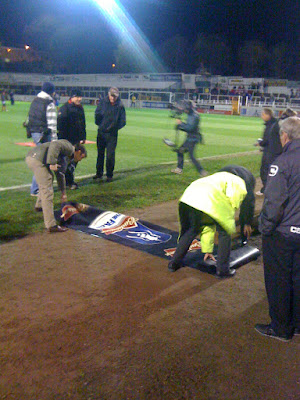 The magic of the FA Carpet.

In the pre match build up Kes Director Ken Loach takes his usual place on the terraces, maybe he could do a film of you, make you look all majestic, like this snappily titled one on Kim Jong-Il. Bath’s mascot, Bladud the Pig, keeps no one entertained by doing press ups. That porcine berk has got to go. Finally the teams line up to the appropriately titled sounds of ‘Ready to Go’ by Republica. Did you have pictures of Saffron from Republica on your bedroom walls and in a locket around your neck like I did Won? God, she was fit wasn’t she? 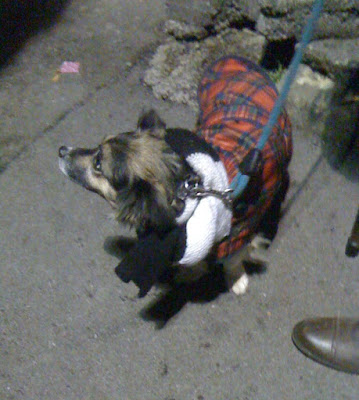 I must shamefully confess I am not sure how your “labyrinth roentgen” formation lines up, but I’m pretty sure Bath didn’t utilise it. It looked more a 4-4-2 to me to be honest. As you rightly identified Lewis Hogg is “a very talented player, an ace for this team” due to his “wide field of view” and he confirmed this as Bath were the better side initially. However, I am sorry to inform you that defensive frailties were again apparent when Dagenham took the lead through Brian Woodall after only 20 minutes. 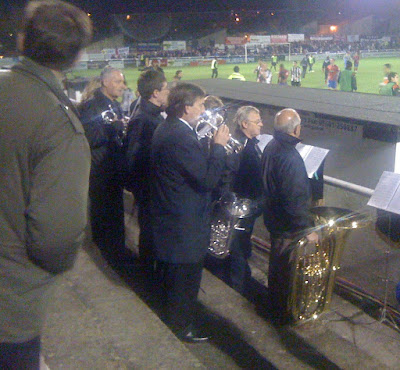 Oh joy. An orchestra.
After half time the main bulk of the vociferous Bath fans don’t change ends, they merely shuffle along to the other end of the terrace, to stand to the side of the goal Bath are now attacking. The middle of the terrace being, like the 38th Parallel North, a no go zone. These are the fans you will need to win over if you are to get the fans to accept your revolutionary tactical approach. 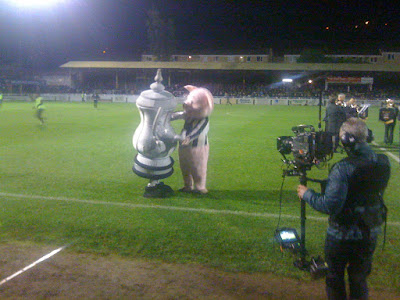 "Help me, get this pig away from me. STOP FILMING ME!" 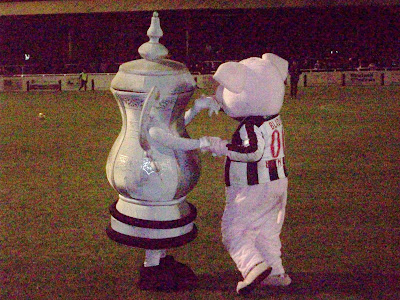 "Oh christ. Get your trotters off me."

Thankfully, there is good news. Specifically that Bath equalised through a strike from 30 yards from Adam Connolly. The goal was of such supreme quality I doffed my traditional Korean gat in Connolly's direction. You didn't mention Connolly in your tactical advice for the game. Have you downloaded the latest Football Manager update Won? 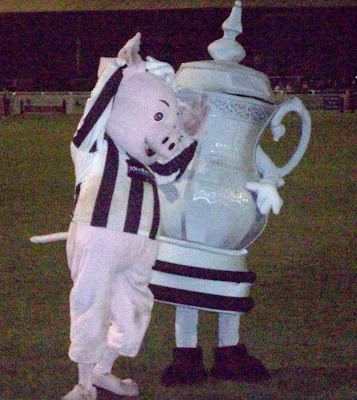 "Please, someone make this nightmare end"
You were right when you, like a confused Yoda, said “finally, a striker Lee Phillips’ll need to use”. Spot on sir. When he came on he really caused that Dagenham defence problems and again you were right when you said “Scott Murray is recommended that you ought to use the player”. Almost won the game for Bath came with minutes few remaining he almost did, sadly he hit the post. 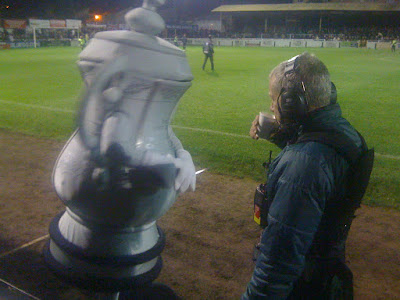 "I'm RADA trained me. Look at me now, out there, in front of all these people, dressed like a tinfoil twat and doing the waltz with an amourous pig. They told me I'd be going to Bath and performing in front of Ken Loach, I didn't know this is what the chuffing well meant. I'm firing my agent. It's alright for you, you've got a cup of tea. I can barely even sodding breath in this thing."

The match went to a period of extra time. The appropriately titled sounds of 'It's Not Over Yet' by Grace was played over the tannoy. They love their 90's pop here Won. Make a note of this: “How to win over fans if not going well: Get Chaka Demus & Pliers to do a personal appearance”. Those Bath City philistines are probably not aware of the early 90's Korean Pop sounds of Seo Taiji and the Boys though. I laugh at them. 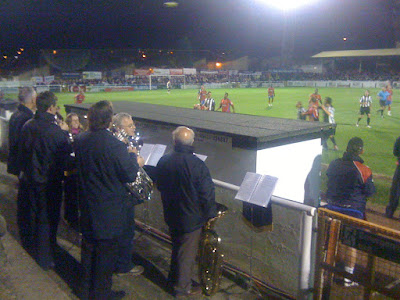 A man called Tom, dressed as the FA Cup, skipped his female chaperone and served to create a fervour amongst the excited home crowd. Sadly the players were not able to summon up such levels of athletic zeal; I feel this is probably due to the presence of a large bottle of Budweiser being played pitch side for the unfortunate recipient of 'Man of the Match'. Quite frankly, and I don't know if you've drunk Budweiser, but it takes of putrid skunk piss (no offence if this is a delicacy in South Korea, I've never been) and I strongly believe the real threat of being awarded this distasteful beverage meant that the Bath players performance levels declined accordingly. Quite rightly in my opinion Won. Quite fucking rightly. 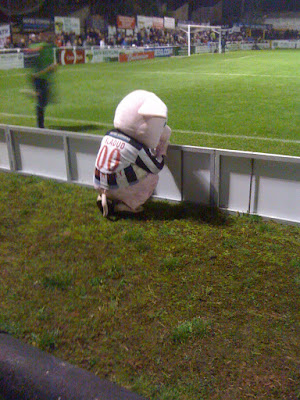 Things get tense as Bladdud spots a Danepak van in the vicinity.

Sadly Won, you will not be leading the team out at Wembley this year. A terrible decision by the (possibly North Korean) buffoon of a linesman meant that Bath conceded a goal that was ridiculously offside. The conceding of a third goal was, like the seizure of power by General Chun Doo-hwan in 1979, a terrible injustice.

Keep sending the emails Won, one day they'll realise they need you. However, if Bath City don’t take up your generous offer then can I suggest you contact Mr George Rolls at Weymouth FC he’d be delighted to receive your emails.