So that was the first big FA Cup weekend of the winter.

It's been a big week for Corby Town FC. On Wednesday they officially opened their new Steel Park stadium with a friendly against Glasgow Rangers, partly due to the town's strong Scottish links, and today the Steelman take on the Gasheads of Bristol Rovers in the 1st round of the FA Cup. 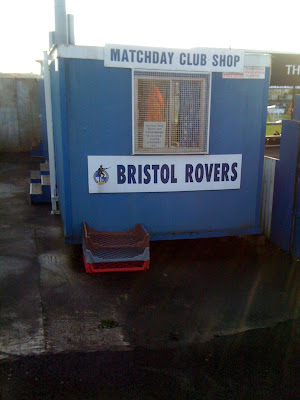 My non match day club shop is a megastore.

The Corby fans were initially quieter than an Arab Strap B Side. A solitary black and white flag is waved, while a sheet with the Jaegermeister logo emblazoned on it (eh?!) falls embarrassingly between fans not aware with the flag carrying protocol being attempted here. These are non league fans, this sort of exuberant behaviour doesn't come naturally. 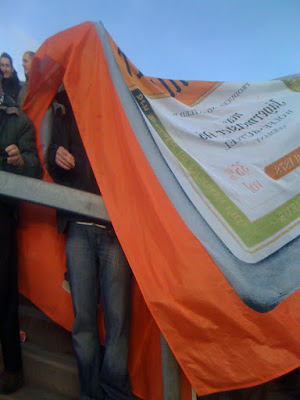 Hands up, put your hands up. Too late.
Where do you even get something like this?

"Pauline!.....Pauline!!......Pauline!!!! Where's my Corby shirt? It's the big FA Cup game against Bristol Rovers today. Everyone's wearing their shirts, it's the biggest day in our recent history, it's going to be a sea of black and white and I want to show my proud support for the team"

"Oh, sorry Dave. It's in the washing machine and I've just put a rinse on. Why don't you just wear that Alan Boksic shirt I got you? They're the same colours aren't they? Why does it matter anyway? 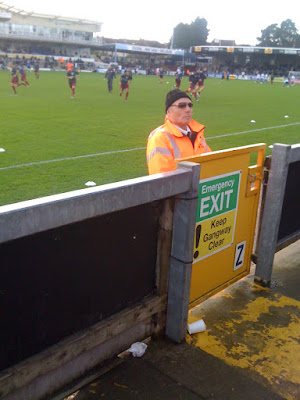 With kick off approaching the obligatory 'FA Cup away day out at a bigger club Glory Hunter Express' arrives and dumps a load of chumps into the ground, swelling the number of Corby fans to around 400. For the dedicated fans you can see the excitement that a match against higher league opposition brings; as the teams enter the pitch a drum is pounded, numerous black and white flags are frantically waved whilst one latecomer throws uninflated black and white balloons into the crowd. Either he's a very tardy man, has severe respiratory problems or has massively misunderstood the basic air filled concept of a balloon. 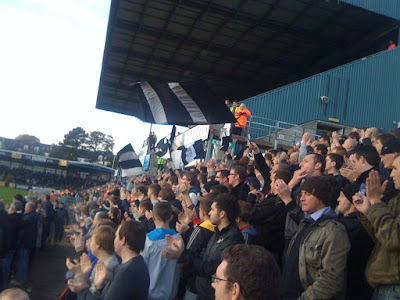 With only a few balloons bobbing around pitch side Rovers almost take the lead after thirty seconds, however Zebroski's shot is horribly mishit. This sets the tone for the first half with Rovers dominating and the game being a bit rubbish really. The glory hunters continue to attempt to start chants that invariably trail off into a confused mumble, or highlight a complete lack of knowledge of even the most basic Corby Town facts, or both; "Hello, hello we are the Corby boys and if you are a... ehhh....."

You can't fault the majority of the Corby fans though, their teenage fan club create a decent atmosphere, not always easy in the open away end, as their team toils away. Throughout the first half they continue to sing, wave their flags and even go for the, rarely seen, chant and prolonged scarf twirling combo. Even going a goal down from a Scott McGleish penalty in 26 minutes can't shut them up for long. 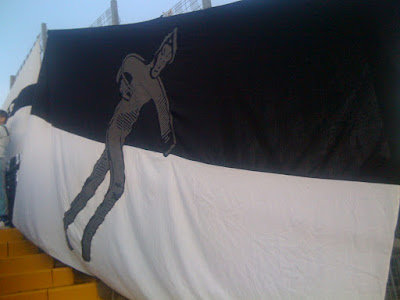 In the second half they get louder and louder as Corby begin to pen Rovers in their own half. When they equalise, after the ball bobbles in off Callum Reynolds, the non existent roof metaphorically comes off. Players rush from the dugouts and a good old bundle ensues, the euphoric fans launch themselves down the terraces towards the players, elated players pump their clenched fists towards the fans and fans ecstatically punch the air and share gleeful embraces. 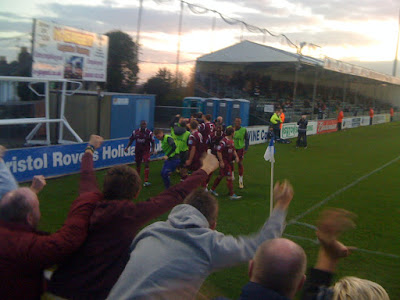 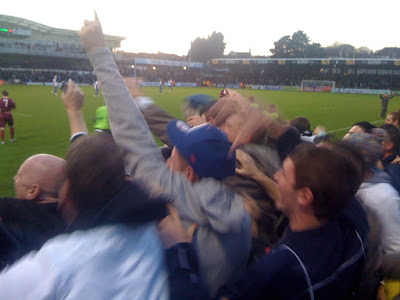 One guy takes it upon himself to become a Capo and gets his shirt off, grabs what appears to be a toy megaphone, possibly purchased from an Early Learning Centre en route. He then leads some more scarf waving and then impressively orders “shoes off if you love Corby”, an order instantly followed by about a hundred trainer wearing Midlanders. *doffs AiT commerative FA Cup cap, drops shoe, puts shoe on, drop hat, picks up hat* These are the scenes resulting from the jubilation of believing an FA cup upset can happen, the belief that your club will achieve a moments recognition in the nation's consciousness and the expectation of further upsets in subsequent rounds. 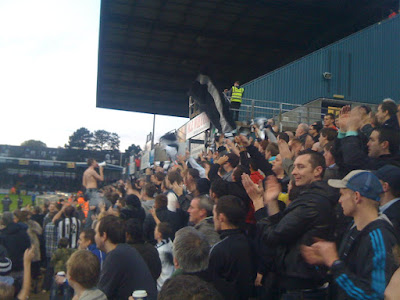 There look, on the left, the guy with his toy megaphone. Yeah, I'll buy a decent camera one day.

God I wish Weymouth were in the First Round of the FA Cup again. We played Nottingham Forest once you know.

Sadly Corby's parity is shorter than Wee Jimmy Krankie and 12 minutes later Mustapha Carayol spanks a great shot in. Corby struggle to get back into the game, the shouting subsides slightly and is replaced with classic non league shouts like “you officious little tit ref.” Sadly, on ninety minutes, Chris Zebroski adds a third and the dream is over. 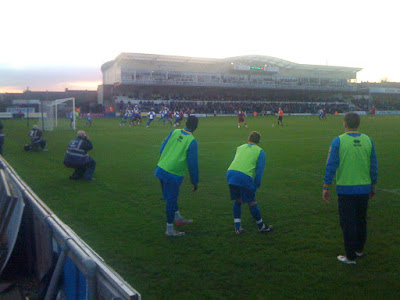 For every cup upset there's 20 more performances like this. Corby's fans and players can be rightfully proud of their today their endeavours today. A day on which the team's battling performance comes up just short; where long term fans have re-affirmed their love for the club and new fans feel the passion that comes from supporting your home town club on big FA Cup day's like this.

**Note to self - investigate options for AiT Rosettes.