Six and the ground.

Good news everyone! George RoLoLs is back as Chairman. Fetch the bunting from the loft, serve up the jelly and ice cream (don't set off a Chinese lantern for the Dorset Echo's sake) and let the good times rolls.

Bad news though. George's wife Amanda has stepped down, if she ever stepped up, as Chairman to spend more time with her quiche recipes. Sad face. I'm sure we all thank her for her contribution to the club and wish her all the best. 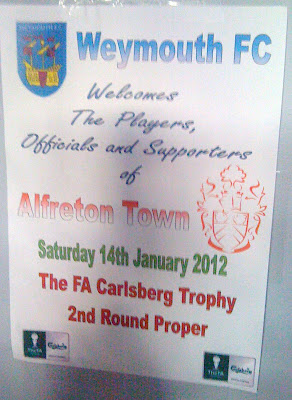 George is back and he's come armed with more plans than a Land Registry.

1. Wiping out £75,000 worth of loans he put in. Thanks George, that's very generous. Is this a good time to discuss those Make It So Ltd shares you transferred to yourself? No? Ok..sorry.

3. Taking legal action against ex-chairman Malcolm Curtis regarding the sale of the land surrounding the stadium. Good luck with that.

4. Selling shares in the club, although only in batches of 2000 at £1,000 each. Apparently due to the paperwork involved. Must have been a nightmare when transferring all those Make It So Ltd shares then.

5. The masterplan. The squad to go full time next season. Yep, that's a Southern League team going full time because “if anything this is going to allow our wage bill to come down.” Presumably RoLoLs has worked this out on a banjaxed abacus and an upside down calculator that's stuck on the BOOBIES function. Or, maybe. Either way, it's nuts. 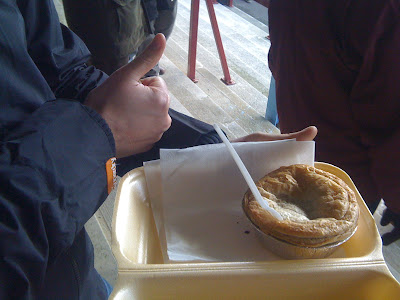 Put your thumb up if you'd like a bigger box for the pie.

With George's masterplan; the team playing well and with a FA Trophy game against a team with squad numbers, Conference strugglers Alfreton, I was delighted to part with my £11 entrance fee. Obviously I paid £20 as, if anything it allows my entrance fee to come down. .

Inside the busy bar are Weymouth fans who've not been scene for a while and a decent turn out of Alfreton fans. In between them a man in an Alfreton club tie, combined with a terrifically bushy tache and slicked back hair hair combo hurries around looking like an under employed northern working mens club compère who once glimpsed fame playing the role of 'Shopkeeper' in the second series of Johnny Briggs.

It's been a while since Weymouth played a Conference side and this match saw us rolling back the seasons. Sadly, we rolled it back to spring 2009, a season where we were regularly dicked by chortling Conference sides. Today horrific defending means we're five down by half time.

Goal five: Anyone fancy a pint?

Sod it. That's that then. Time to put away that tinfoil FA Trophy I'd spent the week making. I say tinfoil, I mean hand crafted silver encrusted with diamonds because, if anything, it worked out cheaper that way.

The Alfreton fans are having a great time, they've even brought some flags. AiT approves of a bit of flag waveage. If there's one thing I can never never approve of though it's the attire of four blokes who should know better. Getting four T-Shirts printed so you can stand in a line and spell out the initials of your club is a massive 'Christ no'. Maybe you were doing it for a bet eh lads? Please say it's so. 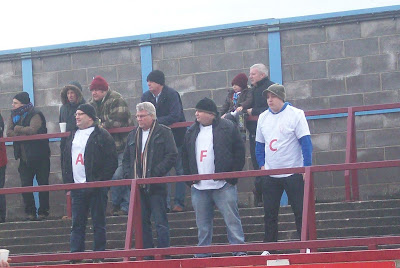 But it's not all bad. These fans are now waaaay out ahead in the running for the 'Most Tinpot moment of the season' award at the (entirely fictional) Tinpotties, the glitzy drab award ceremony that celebrates lovingly mocks lower league football.

Second half, meh. It's great if your an Alfreton fan. Defenders are waltzing the ball out of defence, there's backheels galore, the team make it to brackets (six), the fans successfully solicit waves from their manager and get to sing a full range of songs, thankfully none of them mocking us. A highlight being "By the rivers of Alfreton" I like that. *doffs well worn northern flat cap*

Thanks for not scoring any more goals Alfreton because, if anything, that made you win by more.

Want to see how rubbish our defending was? Clicky.