Keynsham Town FC v Shepton Mallet FC
Saturday 6th March 2010
Toolstation League Division One
The Crown Fields, Keynsham, Bristol
Attendance: 50(ish)
With my own team's future very much in doubt I could very soon be on the look out for a new club to support so it's about time I assess a new tinpot option, Keynsham Town. 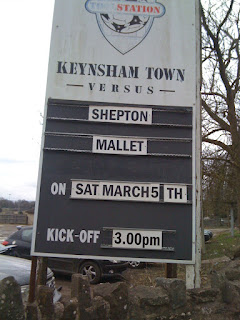 Keynsham is a small town just to the east of Bristol and home town of comedian Bill Bailey and cricket Marcus Trescothick, who has a Close named in his honour nearby to Keynsham's Crown Fields ground. The town is also home to a Cadbury's chocolate factory, which is currently scheduled to close later this year, something that may have influenced this blog. 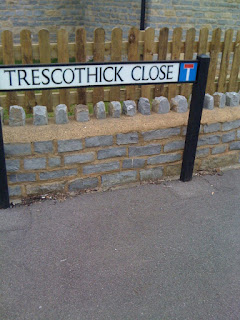 A new low for this blog. A picture of a street sign.

I arrive at the ground about 45 minutes before kick off and am greeted by a stunningly beautfiul young woman, this doesn't usually happen at tinpot football, normally it's a cheery old man so this is a huge plus point in Keynsham's audition. AiT tradition dictates as soon as you enter the ground you head straight for the clubhouse and todays not a day to be messing with tradition. The staples of any good tinpot clubhouse are here, unidentifiable trophies from years gone by, pennants from nondescript teams, photos from an end of season tour, a few people present with a high percentage wearing attire of nearby professional clubs, a slightly old looking elderly gentleman walking round holding a small battery powered radio closely to his ear and the Bristol favourite, a certificate from local tinpot production 'Bristol Soccer World' awarding Keynsham Town the prestigious 'Team of the Week' award. Quite how this award is decided remains a mystery to this day, so much so that even Qadbak Investments, the owners of Leeds United FC and the members of the Dubious Goals Panel have spent many fruitless hours trying to uncover the identify of the individuals that decide this award.

The range of beverages on offer is also an important consideration when trying to identify a new team, Becks Vier and Thatchers on tap earn Keynsham another AiT thumbs up, as does the range of complimentary crisps on paper plates across the bar. However it soon becomes apparent that these are the sole reserve of the barman, who works his way along the bar scoffing crisps from each plate.

As to be expected there is a TV showing Soccer Saturday, however there is also one showing the FA Cup Quarter final between Portsmouth and Birmingham City. Football fans are constantly reminded of the 'magic of the FA Cup', however they'd only have to look in the Keynsham clubhouse to see this opinion isnt shared by football fans as there is one sole man sat in front of the television and he is fast asleep. After a short period of doing the head nod, look around quizzically pre sleep ritual that we're all familiar with he finally drifts off into a deep sleep and not even the erection of a table a mere few centimetres from his face can wake this man from his dreams of tinpot days gone by. In a further tinpot clubhouse tradition a series of random mugs are added to the table along with tupperware boxes crammed with cheap bread rolls stuffed with turkey ham and cheese for the players post match meal. The man wakes up just as Andy Townsend finishes dribbling on and he is fully alert and attentive just in time for a mid afternoon showing of Midsomer Murders, I suspect he had planned his awakening to coincide with the latest display of detective cunning from John Nettles. 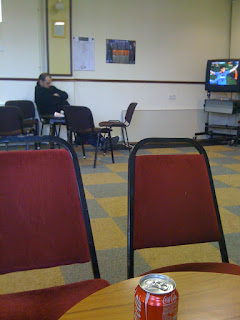 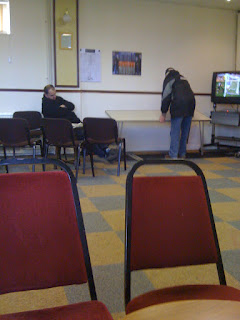 Is it time for Midsomer Murders yet?

15 minutes to kick off and it's time to soak up the big match atmosphere and what better song to play in the build up than 'Time Of My Life by Bill Medley & Jennifer Warnes', the song from Dirty Dancing, probably not a film that features highly on the Top 10 movie list of the few people present. It's pretty much a scientific fact that no one will be leaving this match singing the lyric "I've had the time of my life. No I never felt this way before" with gusto to describe the match we were about to witness. 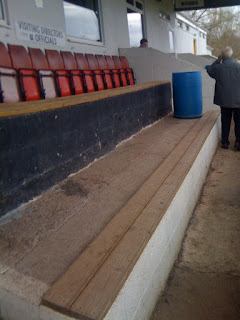 Insert caption here, I can't think of one. You can see what it is.

Ah the match, only 6 paragraphs in before it finally gets a mention. Time to krank up the pun-o-meter 1000 and unwrap the chocolate references (consider yourself warned). One of the benefits of tinpottery is you get to hear everything anyone says, every single Wispa, is heard and the afternoon is off to a great start even before kick off with the Shepton Mallet captain being heckled by his own fans, " you we're right, that new kit does make you look fat....infact any kit makes you look fat".
The first half sees both sides mostly playing one touch football, sadly the one touch is either a mammoth hoof upfield or a miscontrolled shank into touch. The monotony of the match is broken on the 22nd minute when the Keynsham number 9 breaks free of the Flake(y) Shepton defence and gets on the end of a Curl(y)ing (Wurly) free kick with a (Toffee) Crisp finish that Nestlés nicely in the back of the net to give the home side the lead.
Two minutes later and Keynsham and reduced to ten men (fun size maybe?) after the linesman draws the referee's attention to an offence that no one else in the ground saw and the referee produces a red card, much to everyone's (Kinder) surprise. The only other notable incident of the first half is when a large man with a tiny dog in a hoody decides to sit near more and obscure large parts of the pitch. Seriously, a dog.....in a hoody? The teams head in at the half time (have a) break (have a Kit-Kat) with the ref on the end of some serious grief from the Keynsham manager and I take advantage of Half Time (Out) to assess the brews on offer as part of the ongoing research into a new team. Good brews, served by stunning sister of stunning turnstyle operator. I think I'll be back. 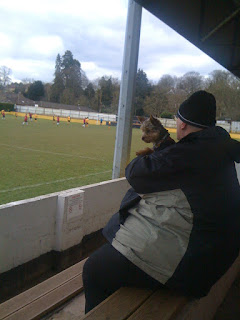 The second half is largely forgettable fare and in need of a Boost. It very nearly went down in AiT legend when a ball from the adjacent rugby pitch narrowly missed hitting one of the Keynsham players in the Whole Nuts, in an incident very much like this, and as we all know that is pretty funny stuff unless your on the receiving end in which case it really smart(ie)s. 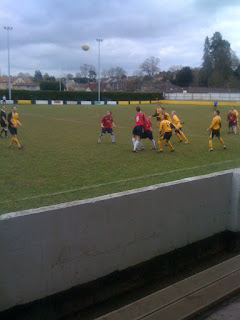 Keynsham have the ball in the net 9 minutes into the second half, sadly the net is a fishing net and the ball is being hooked out of the river/stream thing that runs just next to the ground. Shepton's number 3 spends most of the second half on the end of an unrelenting pantomime booing(I said boo-urns) from the Keynsham youth team after a Crunchie(ing) tackle on the home team's winger. Not a great deal happens in the 2nd half as Shepton lack a certain Kraft and Quality(Street) in front of goal and you get the impression that if this match was played all night they wouldn't score until After Eight. Keynsham have their own chances on the Breakaway but are unable to find a (Milky) way through and double (Decker) their lead. They signal their (m)int(Aero)ent with 10minutes remaining by taking off their solitary striker who is able to Milka the applause from the home fans for his match winning strike and Revels in the glory of his performance. The match(makers) ends 1-0 to the home side against a very poor Shepton side and even with 10 men I doubt Keynsham have had a malteas(i)er game this season.

I've had the time of my life. This wasn't it though.