On the first day of christmas my tinpot sent to me Moneyfields versus Horndean FC.

On the walls of the Moneyfields Social club hung one solitary team scarf, no sign of teams of times gone by, no pennants from other clubs; nothing. Hanging in the clubhouse air was Poundland tinsel and the stale fog of a hundred Brussels sprout scented farts. I soon made it 102 and a half.

New iPad's were charged, kids on new scooters wizzed around, a players Mum showed of her new Cath Kidston bag while a ground hopper filed a couple of programmes in a freshly pressed bag. 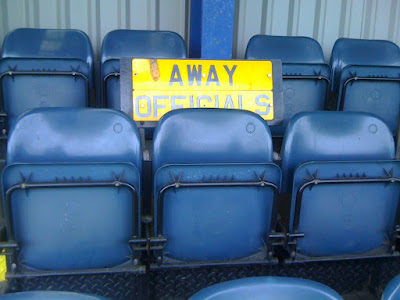 Signs made of number plate letters is now possibly my favourite tinpot thing ever. EVER.

The early kick off had seemingly caught Moneyfields unprepared, goal nets are fixed to the ground just before kick off and corner flags are put in place as Horndean kick off, almost immediately misplacing a pass straight into touch. 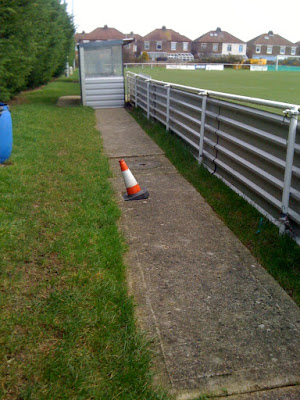 More thrilling photography brought to you from Adventures in Tinpot.

Two minutes later Ho Ho Horndean get into the Christmas spirit and gift Moneyfields a goal, the Horndean manager responds with a "fucks sake". From here seemingly every act by a Horndean player is followed by an angry sweary swear, as every touch is mis-controlled, every pass mis-hit and every shot off target.

Like receiving socks for Christmas for the 24th year in succession Horndean conceding a second is no surprise. Steve Hutchings scores a penalty it front of the massed rank of two fans, one furiously producing thick clouds of smoke from a pipe (a pipe – Yes! *punches air* When I'm older I'm going to smoke a pipe) and another old boy watching from a chair wedged in the clubhouse doorway. A clear fire hazard. Never block an escape route. Basic fire safety that. 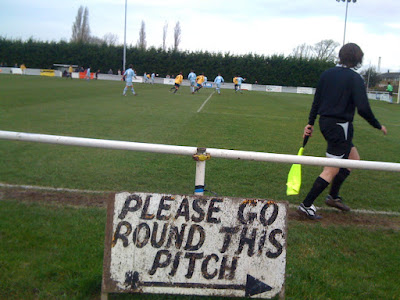 What's wrong with 'Keep off the Grass'?

I've been a really good boy this year and I wondered if you and Rudolf the Red Nosed Groundhopper could bring me a special gift this year. Please could you bring me something really funny at Moneyfields FC, I don't know what but if you could leave a surprise there for me there I'd really appreciate it. I'd also really like some Bristol City roller blinds.

P.S - I've left a match programme and a Bovril for you.

Oh, Santa thank you!! It's better than I could have ever imagined, I love it so much! Some seats from a bus stop in the Moneyfields dugout, I would never have even thought of it. I love it! Thanks Santa!! You're the best. 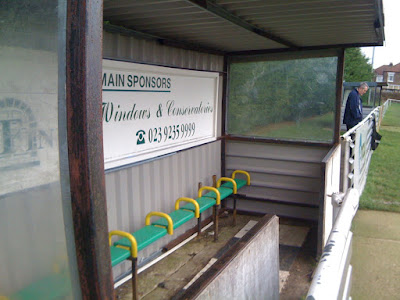 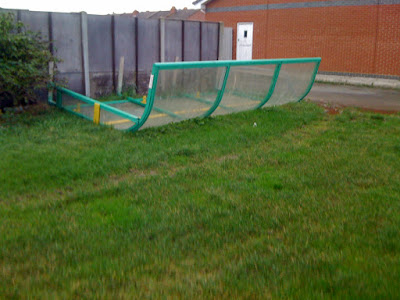 Somewhere in north Portsmouth confused commuters stand in the rain waiting for a bus.

It's not the only thing that has mysteriously made it's way into the ground, a Pukka Pies sign advertises their non available wares, a newsagents sign promotes the next couple of games and dotted around the ground are 3 gold coloured bins advertising 'Coors' - not your new modern fangled fancy 'Coors Light', not even your Irish tin whistle toting pop combo The Coors, nope this is the Coors that sponsored Erland Johnsen era Chelsea. 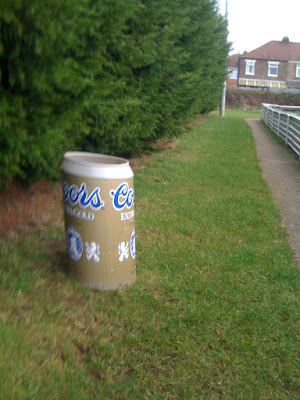 The unprepared nature continues. Shortly after the refreshment hut runs out of, well everything it seems. Hot dog? No. Cup a soup? All gone I'm afraid. Chocolate bar? You should have brought your selection box. A kid is dispatched and his scooter to the Co-op to get some milk in an attempt to keep tea sales ticking over. Always have enough milk for teas. Basic catering skills that. 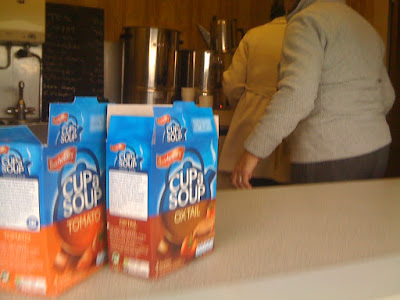 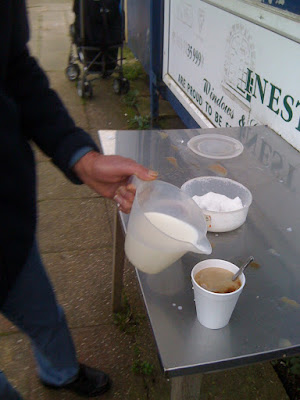 Easy on the milk there, that's got to last. Everyone, please welcome the left hand of Old Father Tinpot making it's AiT debut. A big hand for the hand please.

Not everyone at Moneyfields is a little disorganised. One woman walks along the terrace attempting to make people part with that manky £10 note Nan gave them in a Christmas card in exchange for one of her home made scarves in the yellow and blue of Moneyfields. Amazing stuff! A big doff on the home knitted slightly ill fitting AiT bobble hat to you. Identify a gap in the market and fill that gap. Basic business skills that. 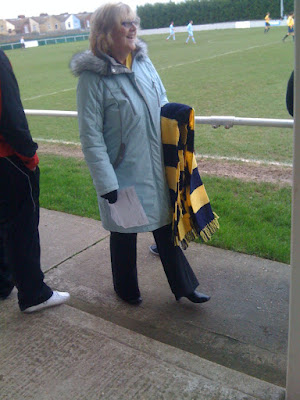 Sod the Dukla Prague away kit, all I want for Christmas is a home made Moneyfields FC scarf.

Before half time it's three nil and, like a butterball Turkey on Christmas morning, Horndean are having Paxo firmly rammed up their anus being well and truly stuffed. Horndean go with the triple substitution which sees a kid come on with a hair cut that suggests he plays bass guitar in a locally popular but, nonetheless, hugely derivative indie band. He's not much good at football. 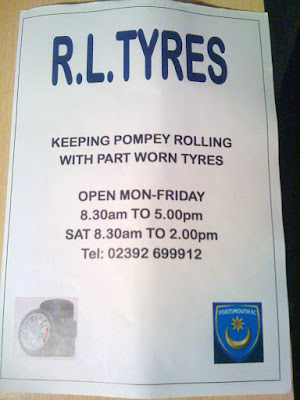 The game drifts to a conclusion, the home support urging the ref to conclude the game “hurry up ref, the Eastenders omnibus starts at 2:45”, a subbed Horndean player leaves ten minutes before the end, presumably to go shopping with Darren Bent, and the game finishes with the ball being booted firmly into the trees surrounding the pitch.

Now...hold hands with the person to your right, and sing along with me! 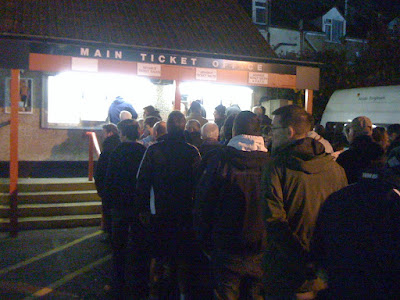 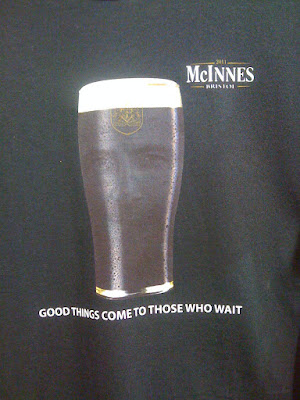 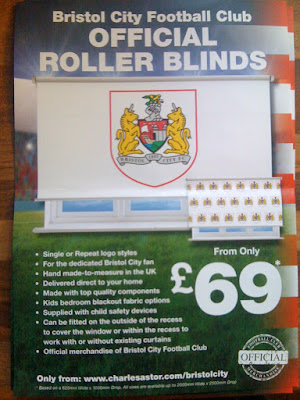 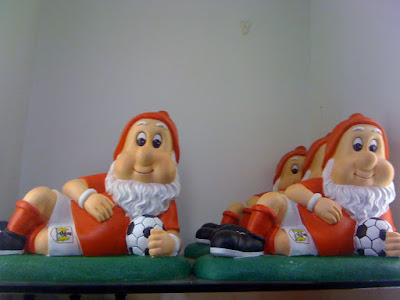 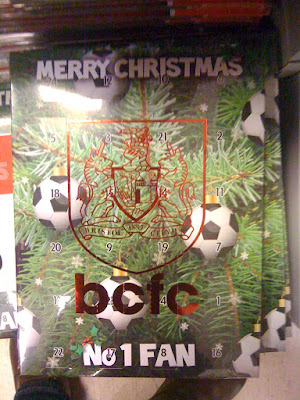 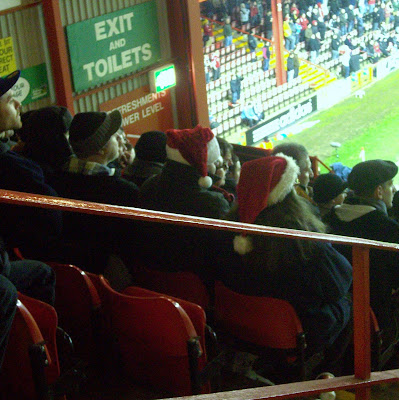 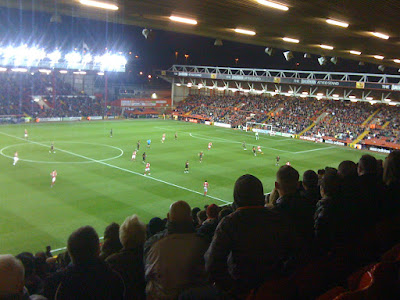 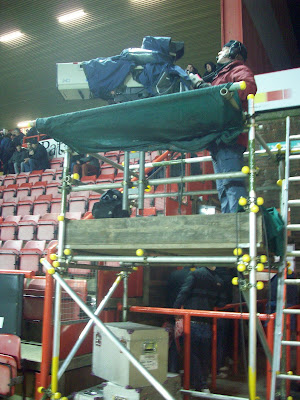