The Most Immaculate Haircut

"Sorry, we only do bratwurst on a Friday night".


Not a great start to the trip. Slippery bockwurst from a jar are the only food option. I'll go hungry, thanks.

Things aren't great in Eisenhüttenstadt. The town’s best days are long gone and the football club can no longer match past DDR achievements. 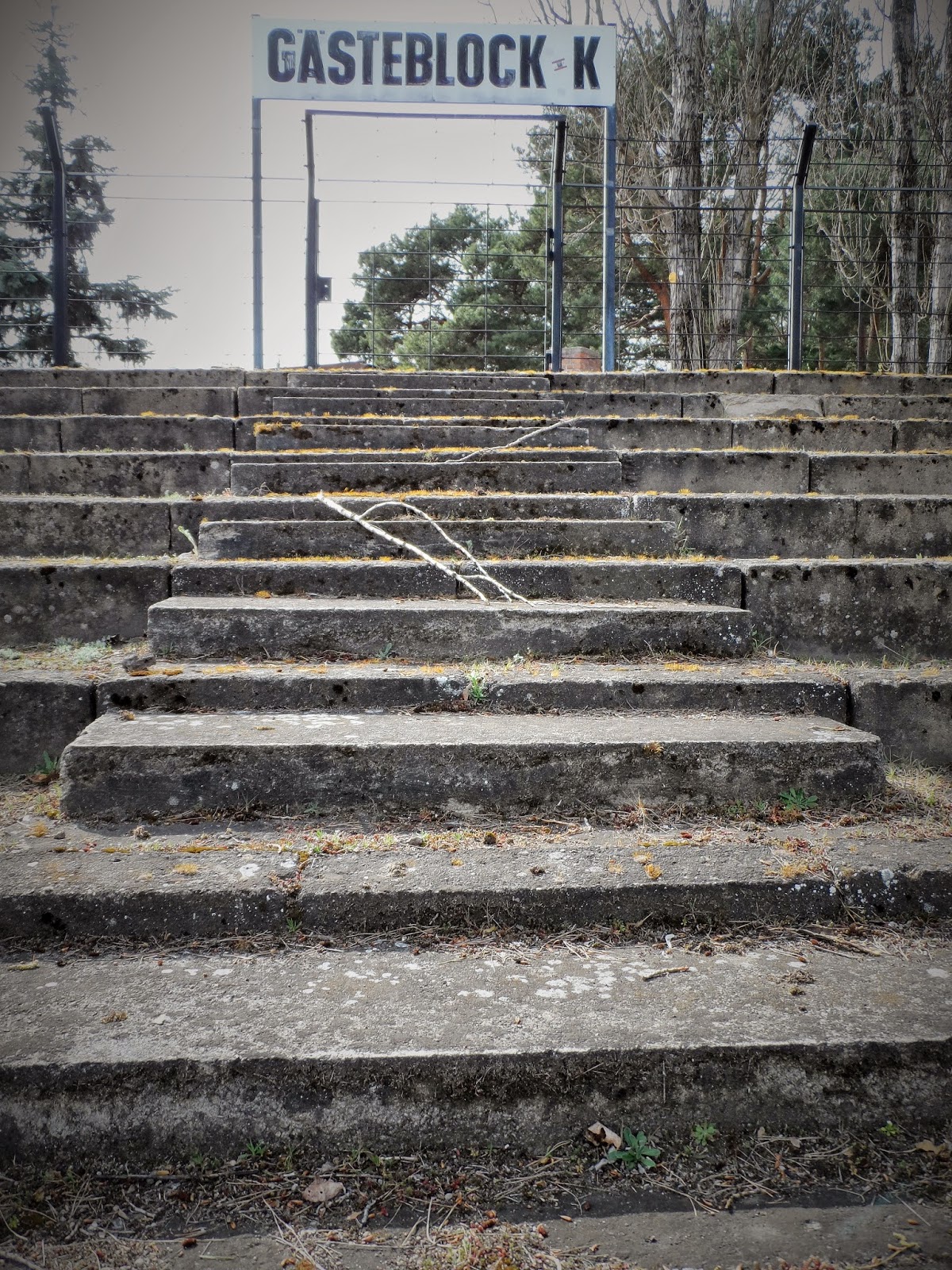 Eisenhüttenstadt was East Germany's first pop at a town in a fully socialist planned style, a commie Milton Keynes if you like, and originally called Stalinstadt. At the time the Berlin Wall fell Eisenhüttenstadt was home to 50,000 people, a huge steel works, and a team in the top level of East German football. Now, half the population have buggered off, the steel works is mostly closed and the team are struggling at the bottom of 6th level of German football. Still, I bet the Commie's could manage to BBQ a Bratwurst on a Saturday. 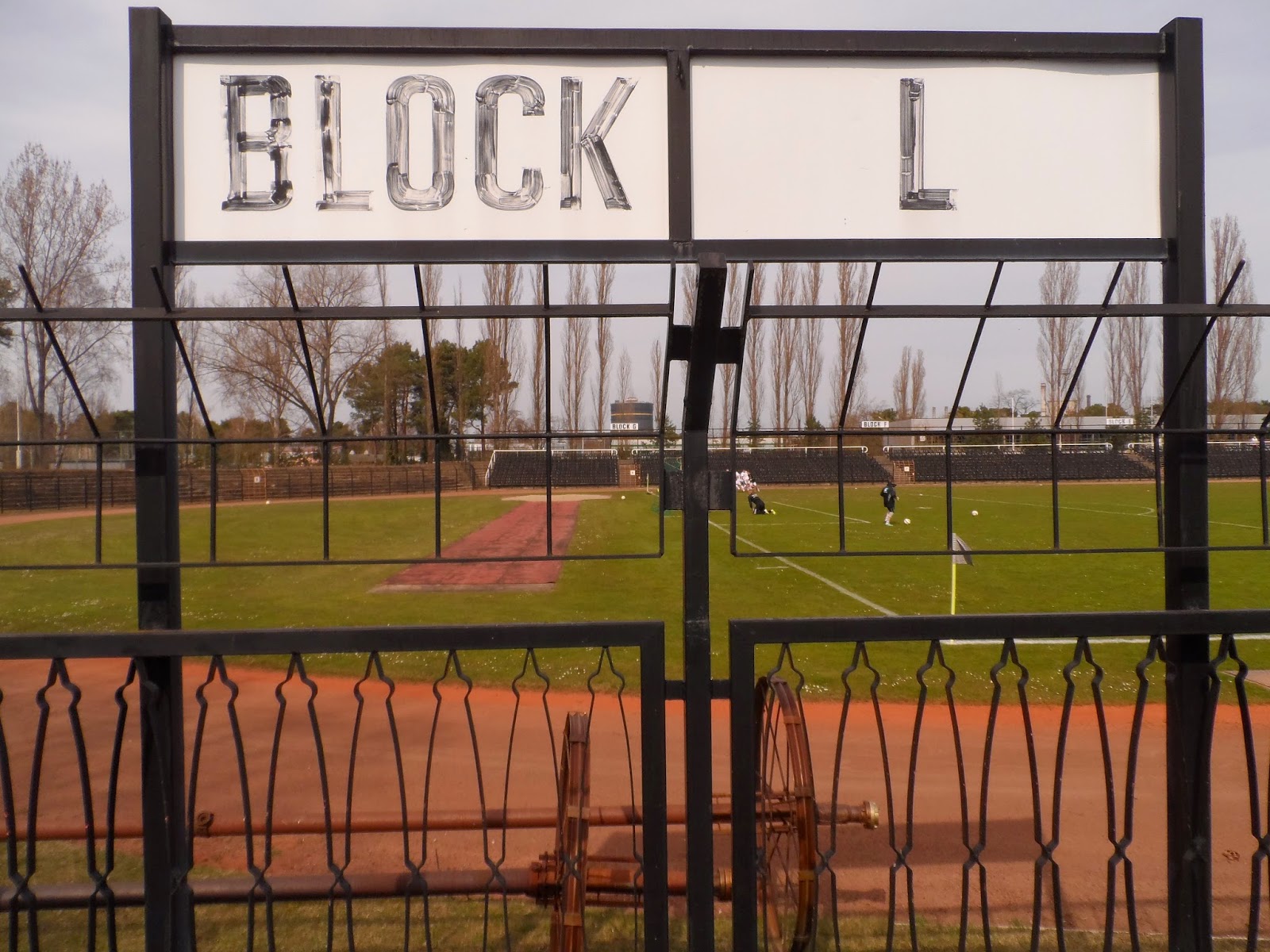 Appears to have been coloured in with a permanent marker.

The main stand is a cramped, crumbling and dusty socialist relic. Seats are missing, leaving unwelcoming wooden benches. Those seats that remain are filthy, or cracked; or filthy and cracked. The sweeping terraces are covered in weeds and moss, the club house is closed, the scoreboard is broken, the stadium signage has faded away to feint outlines and the goal posts are rusting. 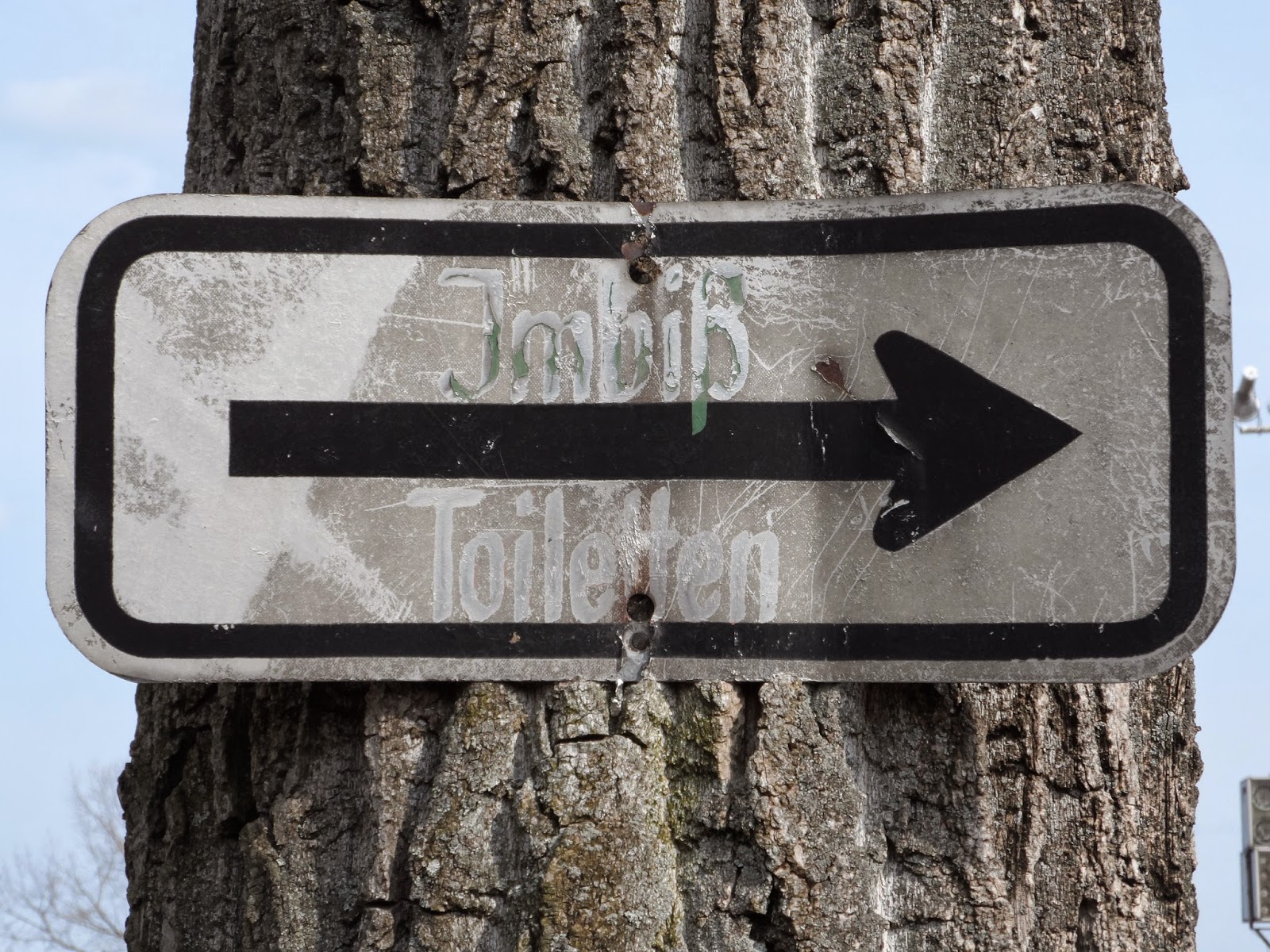 The road to nowhere. Not a road. 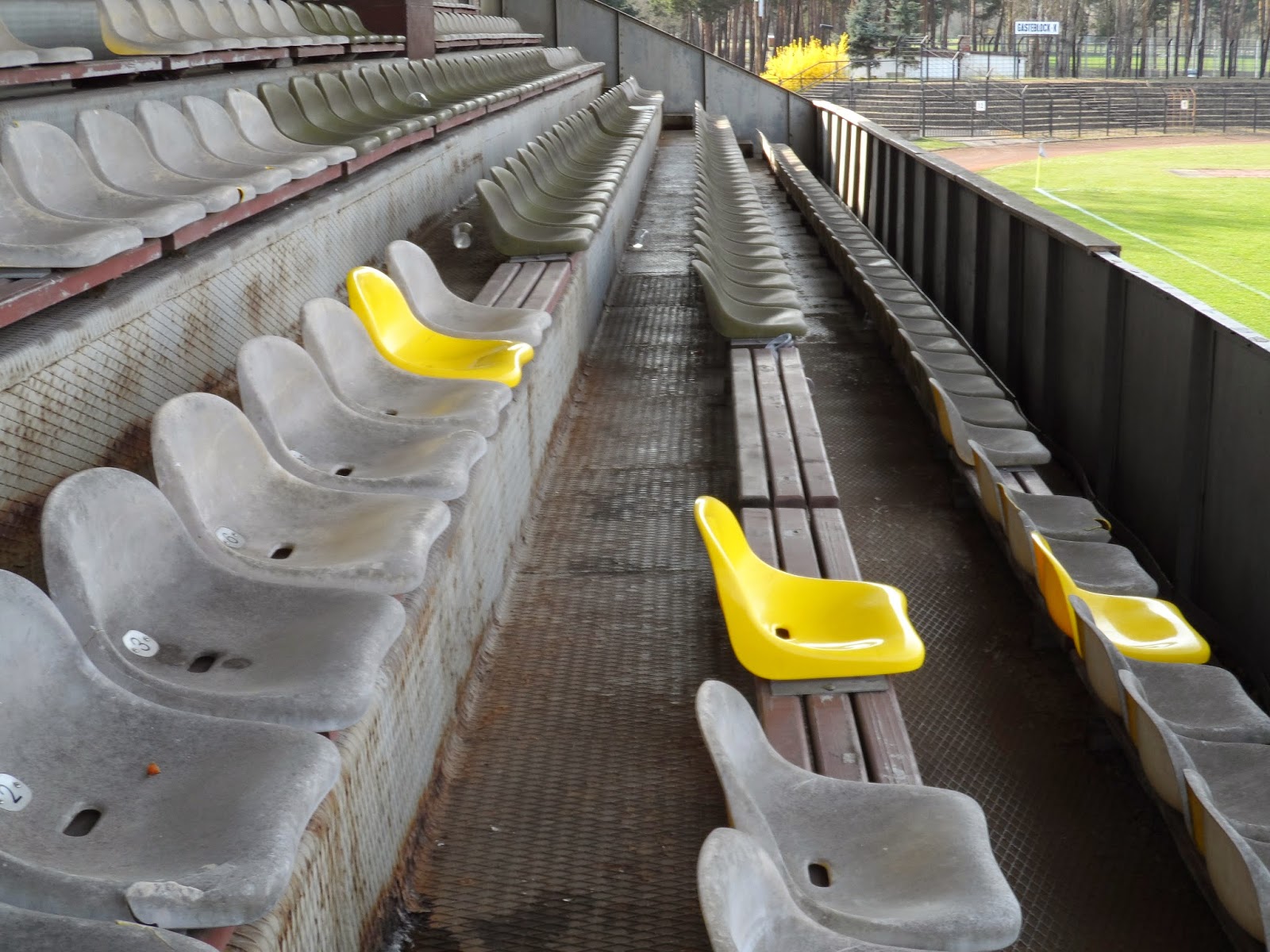 "Dear esteemed committee members, good news. We can afford to replace the dilapidated seats in the main stands."

Double-denim clad fans make their way to the ground along broad, deserted streets lined by abandoned housing blocks bearing socialist murals. They’re greeted by a sparse food offering and jaunty electro indie pop, which has recently been introduced to Eisenhüttenstadt (or, if you prefer an English translation, Iron Hut Town).  Pre match tunes include "I Still Remember" by Bloc Party (Blok Partie), "Everything Counts (Everyzink Counts) by Depeche Mode and "Mr Brightside" (Herr Brightside) by The Killers (Die Killers Die). 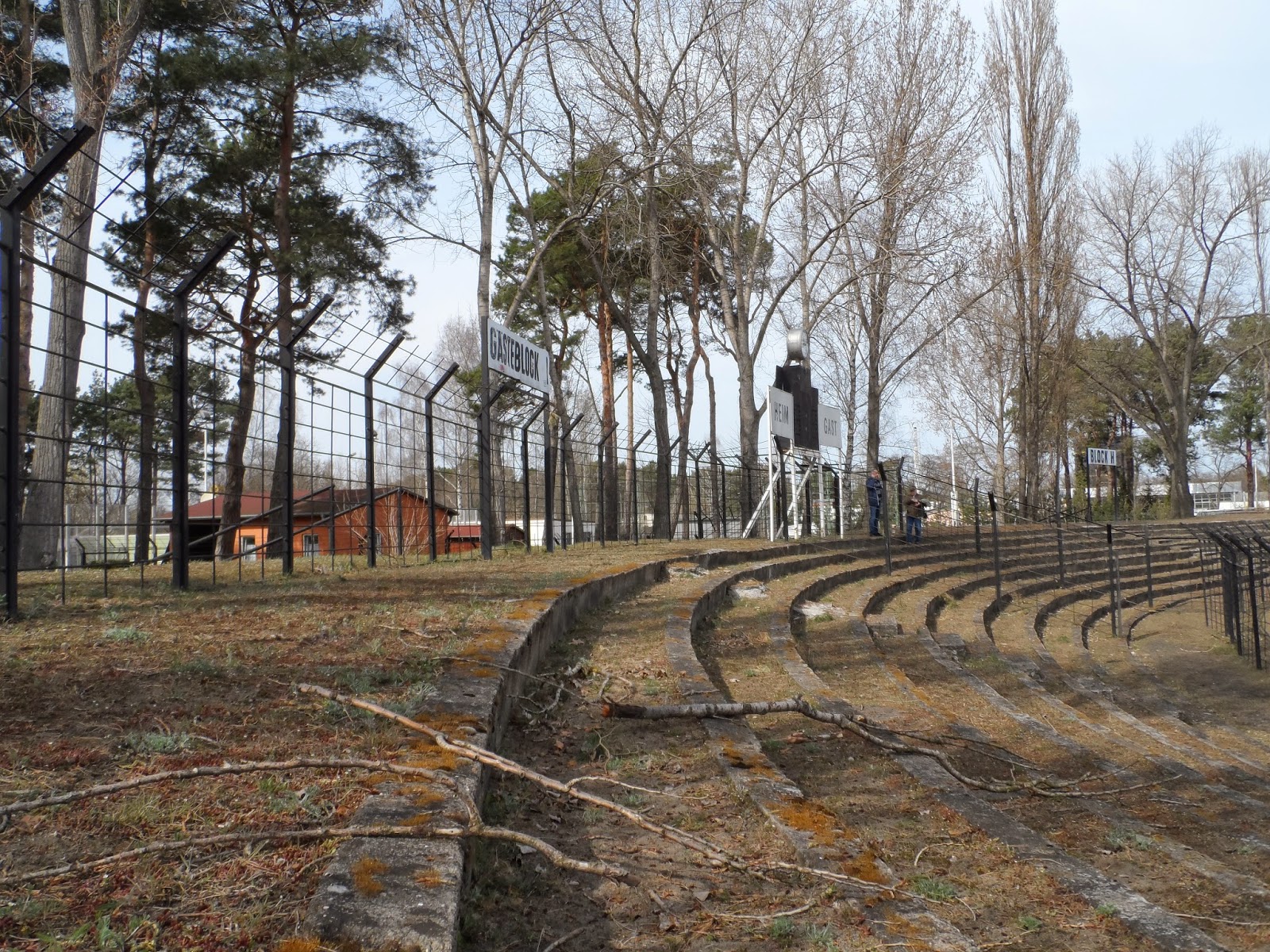 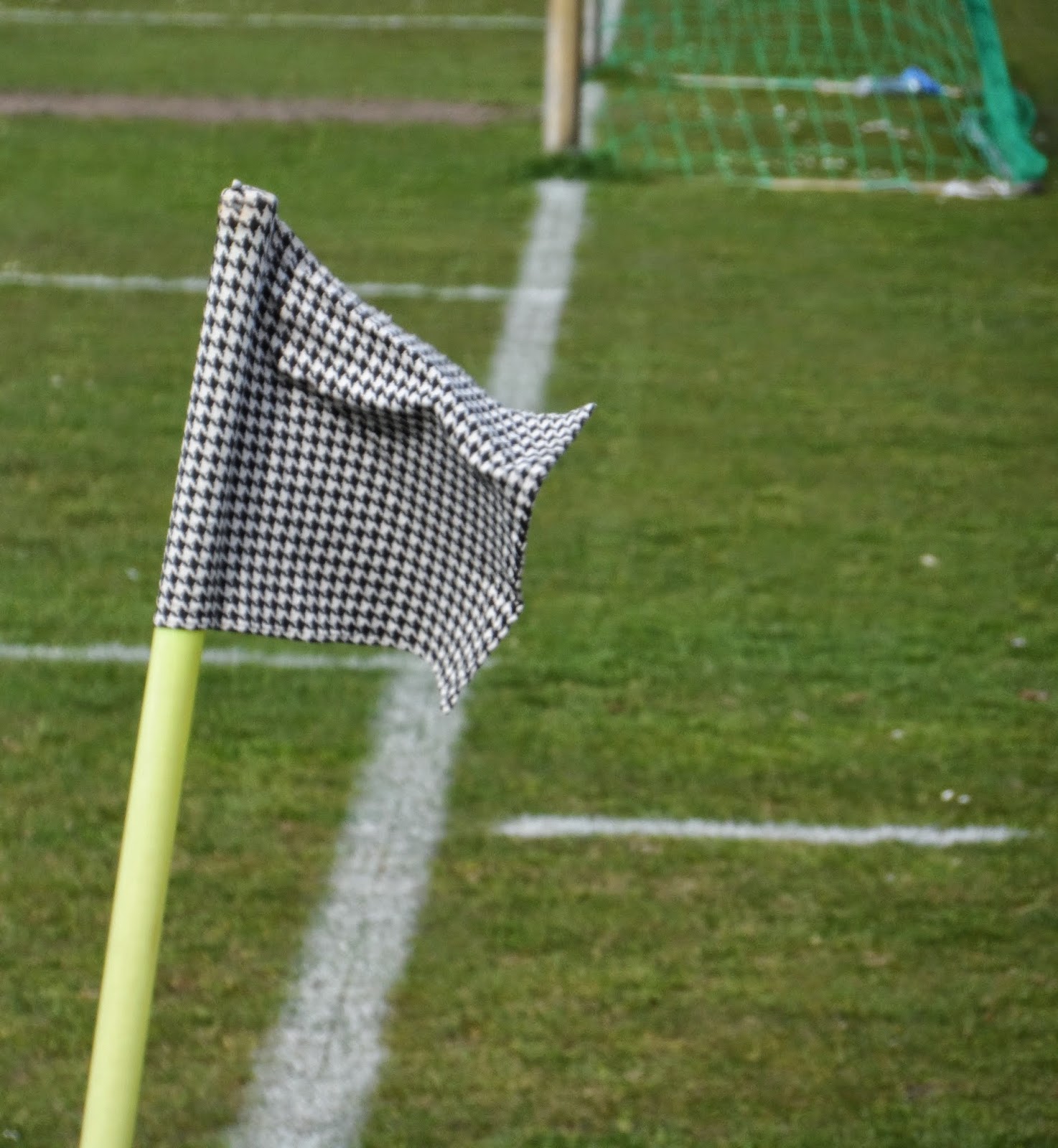 Fritz vowed never to go to the football again after his prized handkerchief turned up tied to the corner flag. Oh, the indignity.

Both teams consist of eleven men who don't look like footballers. Most of the play suggests many of them aren’t footballers. Eisenhüttenstadt’s number ten is an angry brick of a man who barges into anyone who comes near him whilst simultaneously struggling to control any ball that comes near him. He can’t shoot and generally has the demeanour of a hunger crazed German carnivore who's just asked for a large Bratwurst at a Morrisey concert. 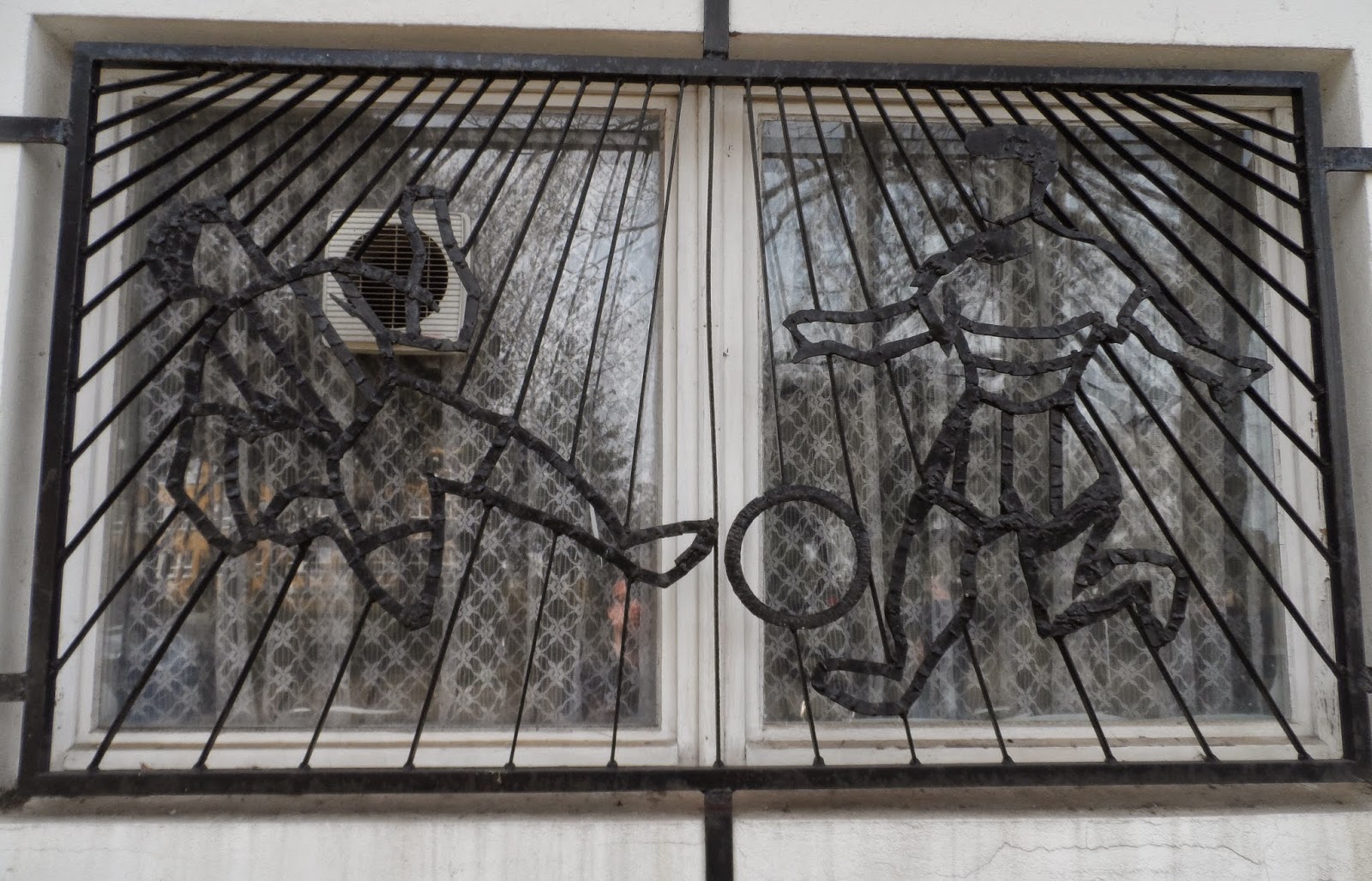 "For me, Geoff, that's a straight red. He's gone in with both feet of the ground, with full force and he could do serious injury.

"Yes I agree, my question was about why the player on the right appears to be wearing striped shorts? No one likes to see that in football."

The home team are two down after twenty minutes, but they get a penalty shortly after. This penalty could change the course of the match, revitalise the clubs season and give rise to the re-awakening of the town. Carsten Hilgers places the ball confidently on the white cross which marks the dry bit of earth which marks what used to be the penalty spot. He steps up. He waddles it way over the crossbar and straight over the sand-less long jump pit. After that it’s all Sachsenhausen. 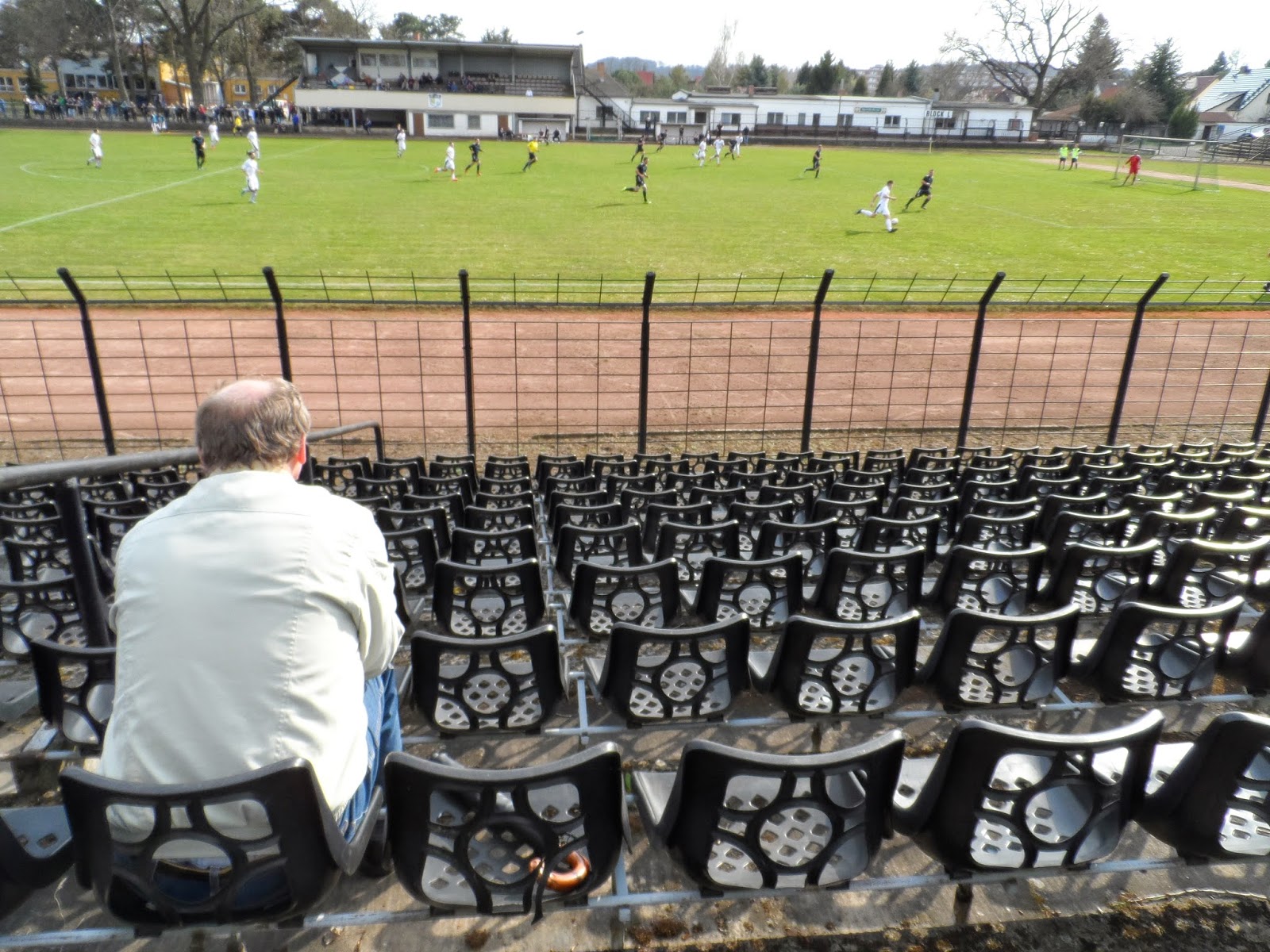 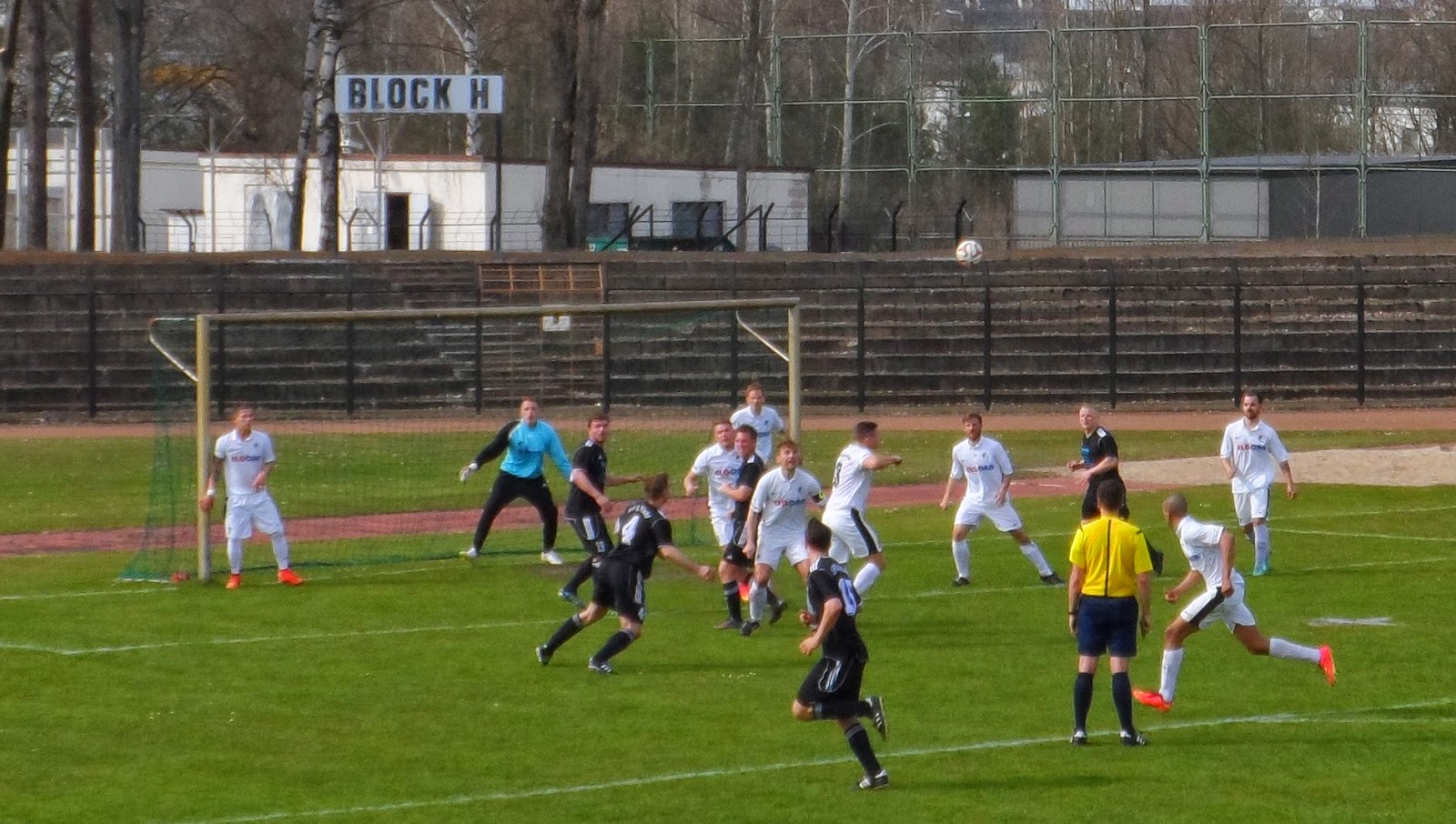 Sachsenhausen’s manager, Frank Schwager, is a man enjoying the afternoon in the spring sunshine. Frank Schwager is also clearly a man who used to have a mullet. He still maintains a little bit of it, just enough to tickle the collar area. 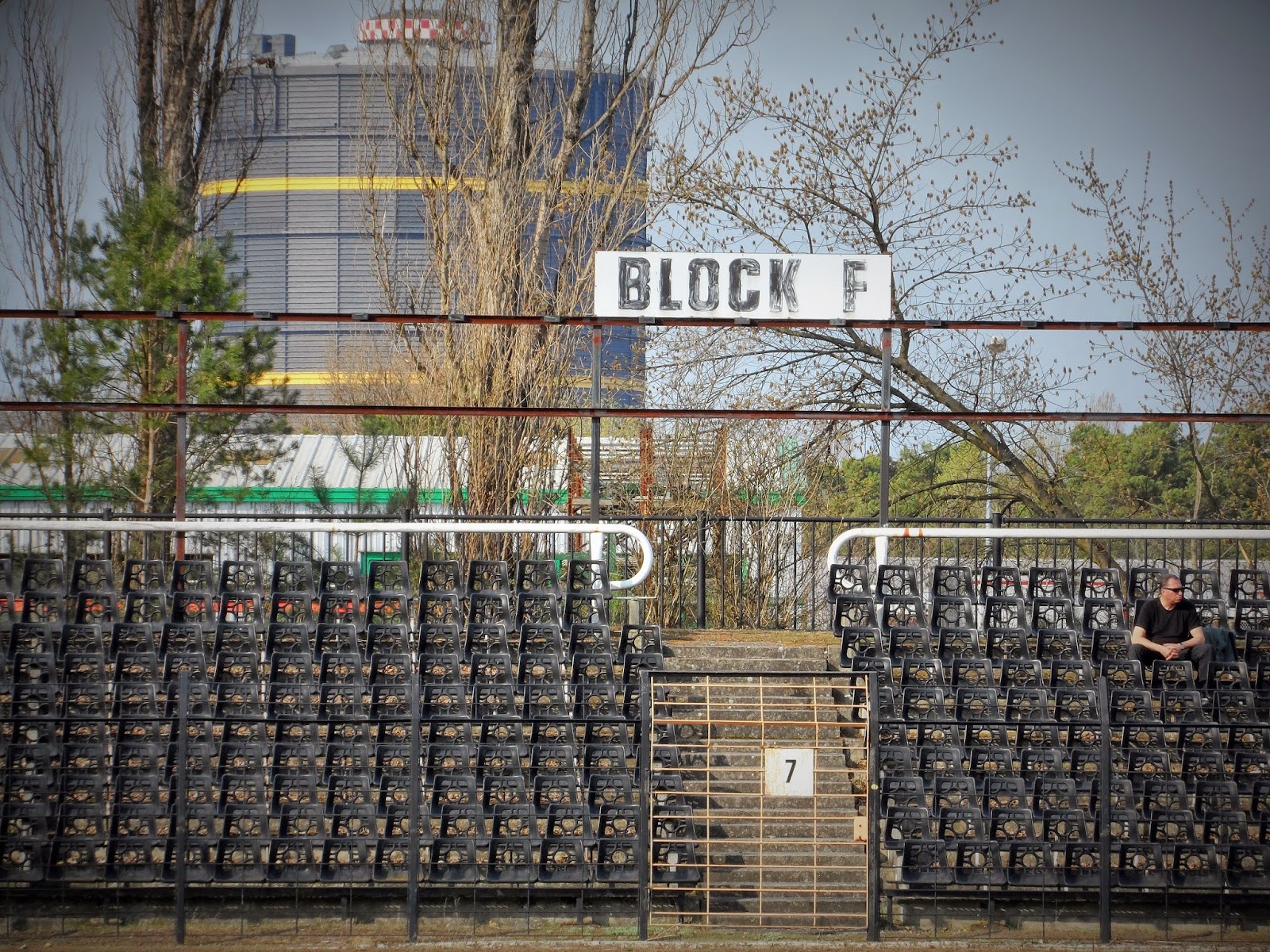 The "F" stands for "Full of People"
He’s a man that knows that the heady days of peak mullet (1987 - 1991) are, regrettably, gone, but his haircut reminds him of a rebellious youth he’s unwilling to let go of. He’s in mullet rehab. Slowly reducing the length of a mullet before a more contemporary haircut is slowly introduced is a tactic used by many FMS (Former Mullet Syndrome) sufferers to help them reduce their dependency on the short at the front, long at the back style and, very slowly, rehabilitate them into normal hair styled society. 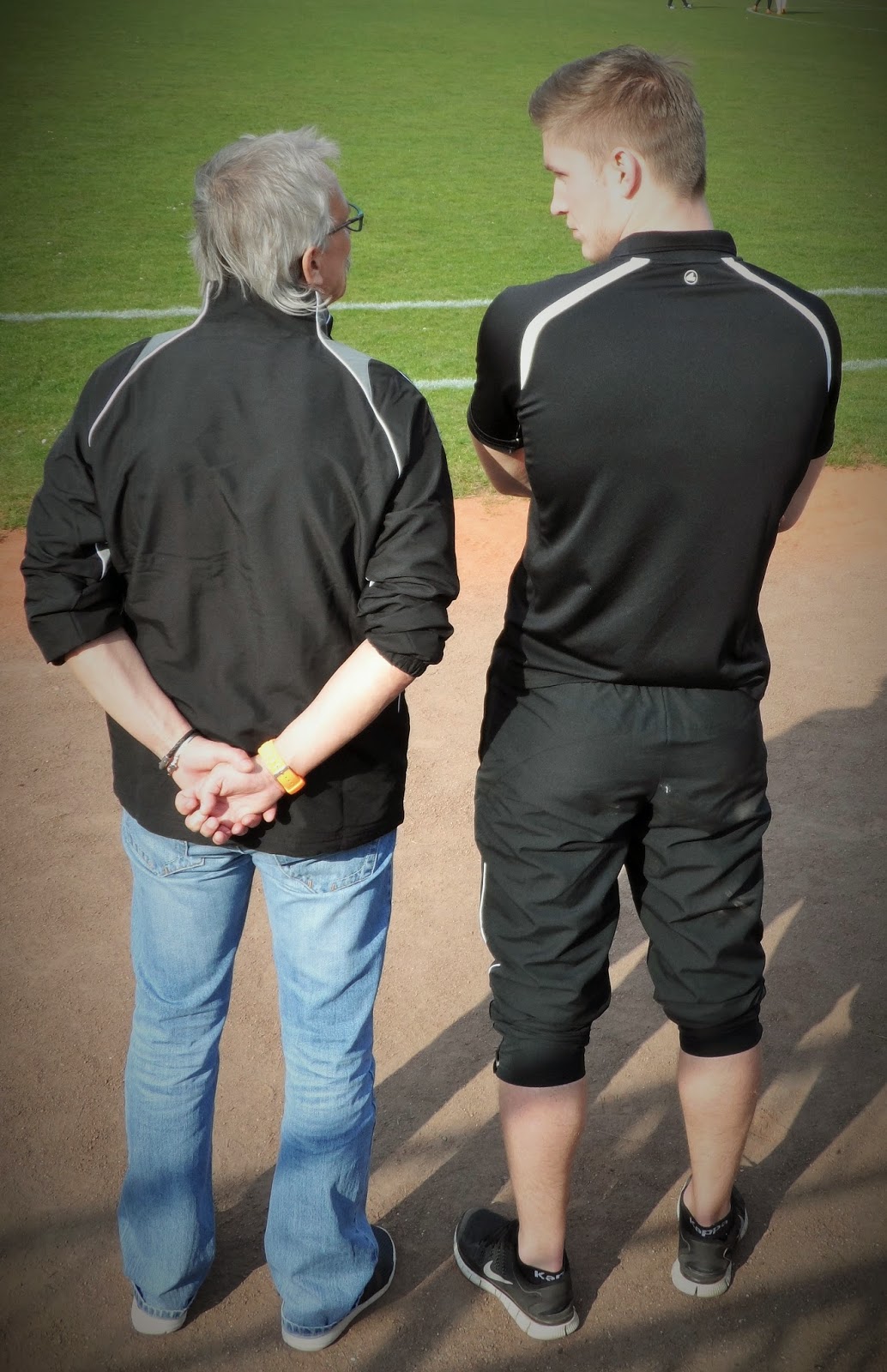 The treatment is going well, we are pleased with his progress but he's not fooling anyone by tucking his mini-mullet into his tracksuit.


Downtrodden areas, like East Germany, are prime FMS territory and, statistically, football managers of lower league clubs are 37% more likely to suffer than the rest of the population. Secret clubs congregate regularly in dank church basements for slideshows of the photos from the heydays of the mullet and to receive updates from the last bastions of mulleted resistance against the square haircuts of the capitalist world. 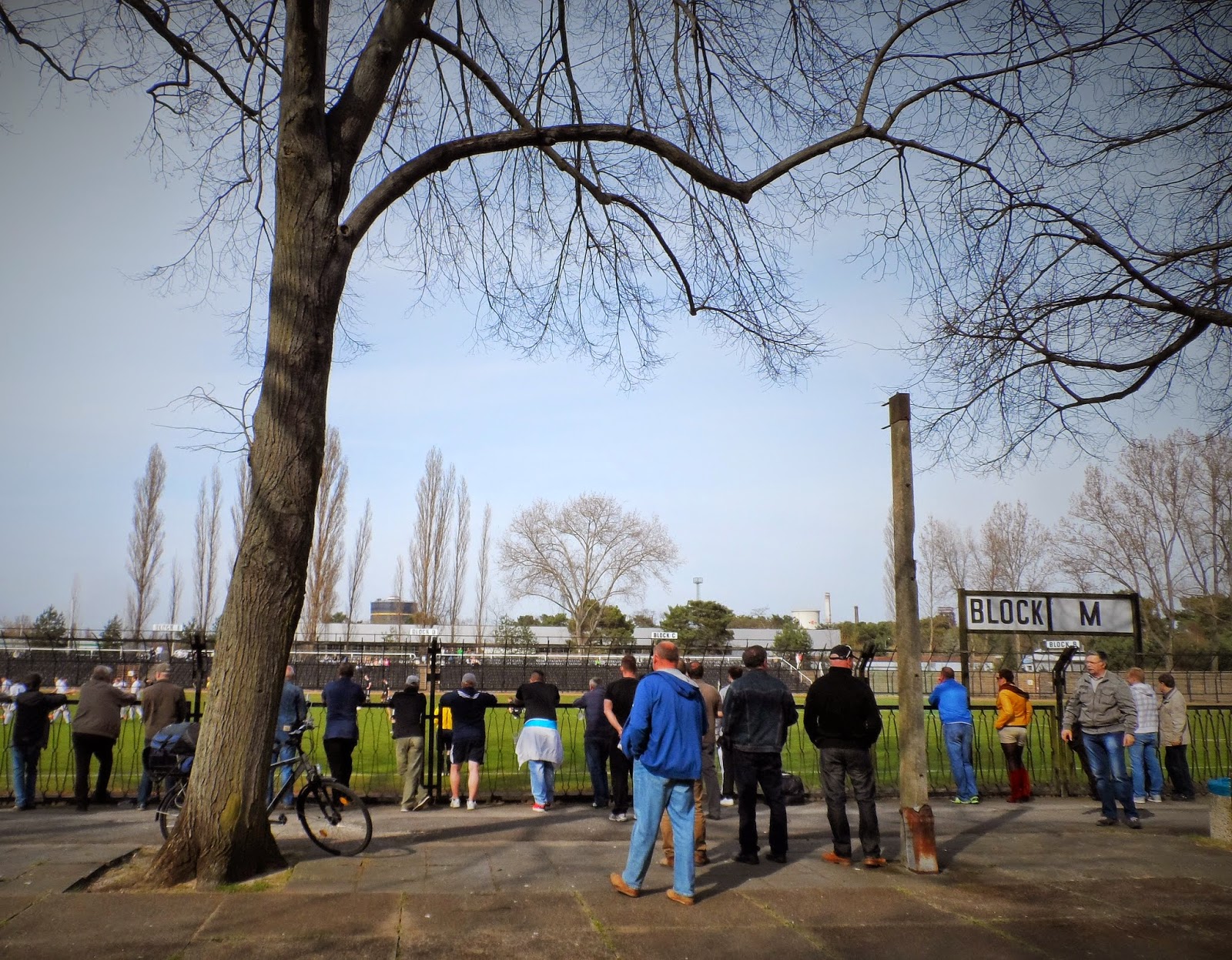 Frank’s work in the second half consists solely of stroking his tenny-tiny mullet and having the Bundesliga scores read to him by his assistant, a man whose sole duty appears to be to read out football scores out from his mobile phone to a boss who “hasn’t got his reading glasses on”.  Glasses, or not, Frank sees his team score two more goals in the first ten minutes of the second half before they declare. Eisenhüttenstadt, its bratwurst starved people and its football team have suffered enough.


If you too suffer from FMS and would like to speak to someone the AiT confidential hotline is open 24 hours. You do not need to suffer alone.
Posted by Kenny Legg at 18:49 No comments: