I am Nyíregyháza Spartacus

Sunday, last day of this genius trip and thankfully one that didn't involve a coach. It did involved 3 trips on the metro, 4 buses but all worth it in the name of a bit of Hungarian 2nd division football.

First up a trip to Boszik Stadium, home of the legendary Honved. Sadly there was no way into the ground an even a unscheduled trip through an open air flower market could not make the 'magic gate'reveal itself and we had to make do with looking at the ground from a fair distance away. Sad face. One of the EFW team had even shed blood in his attempt to get to the ground, so to miss out was a bit of a kick in the balls. 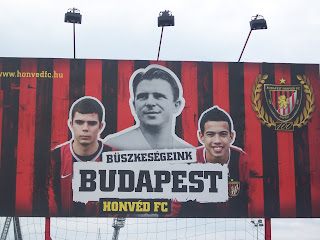 Um, it's a sign. What more to say?
As tradition dictates we decided to shun the formal opening of match proceedings that is kick off and turned up about 20 minutes in missing the opening goal scored by the wonderfully named guests. Nevermind. Half time and the opportunity make Ujpest rich beyond their wildest dreams as 30 of us sought to part with our remaining Hungarian florints in return for some scarfs, pendants and whatever tat we could lay our hands on. But no, "it's a weekend the shop is closed". Yeah, the shop is closed but there's a match on and there's 30 of us here desperate waving wads of cash, why not open it? It wasn't happening. Screw you Ujpest! Screw you! 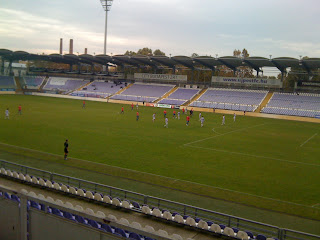 Token match shot. Forgot I had a zoom function on the camera apparently.
The match itself was fairly decent, it was just played out one of those bizarre atmospheres that occur when you let reserve sides participate in national leagues and no one can be arsed to go and watch. Spartacus won the match fairly comfortably 2-0, despite having their keeper sent off half way through the second half for absoloutely nailing a Ujpest player on his way to goal. 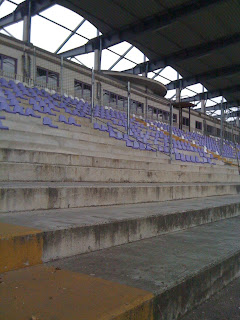 Dear Ujpest, thanks for the hospitality, love Ferencvaros. Ps - we broke a couple of chairs, sorry about that. Oops. LOL.
The weekend was rounded off with a few beers and the first proper, non sausage, meal of the weekend in Budapest's fanciest sports bar Box Utca. The food was superb and who can fault a restaurant with an obscene amount of TVs and sporting memorabilia and if that wasn't enough TUC biscuits for all with the bill!! 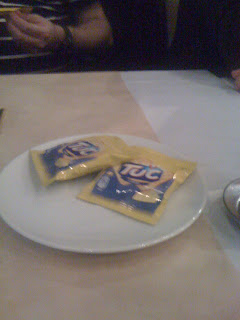 TUC-king magic
All in all a top weekend with some great lads, some crap football, and plenty of laughs - everything an EFW should be. Bring on next year.

Thanks to Danny Last and Stuart Fuller for organising and for everyone else who made it a top weekend.