GAK To The Future

Yesterday's walk to the Donawitz Stadium in Loeben was soundtracked by church bells and took me along beautiful rivers rippling between picturesque hillsides. Today's route to the UPC Arena in Graz took me past the Hip Hop World Championships (It's a little known fact that Public Enemy are actually from Salzburg and that 2 Pac was originally called Zwei Pac), an Aldi and a Hooters. 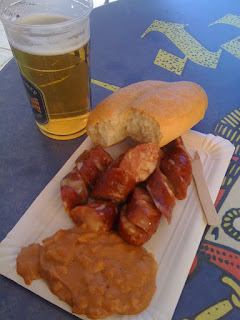 The sausage with cheese in it I was a big fan of, the student sick sauce not so.
The UPC Arena is home to Grazer AK and their big city rivals Sturm Graz. The stadium was formerly known as the Arnold Schwarzenegge stadium and was changed in 2005 as Arnie revoked the city's right to use the name.Sturm are the current Bundesliga champions while GAK, who were League Champions in 2004, are now in the semi professional Third Division as a result of being docked 28 points in 06/07 and not being allowed to compete in the professional leagues in 07/08. 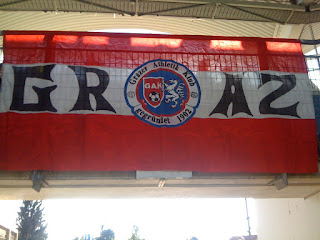 Self explanatory this one. Doesn't need a caption.
It's clear to see who are the bigger team, Sturm adorned bars and a fan shop line the area around the bland stadium. While Graz's fan shop is a couple of tables inside the ground. The atmosphere builds up nicely; men are despatched amongst the crowd with beers and carrier bags full of pretzels for the sun drenched crowd, fans take their places on piles inducing seats, a battered drum is set up, the 'Red Firm' and 'Graz Society' Ultras banners are taped precariously above the moat that surrounds the pitch and then the most ripped off song in the history of tune is played over the PA, "Football's Coming Home" - GAK style. Lyrics are dicked about with to create "Tears for heroes dressed in red" and the frankly nonsensical refrain of "Heroes in the shirt, everybody's gleaming." 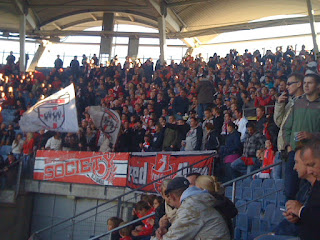 Grazer AK Ultras
Everyone in the ground is (not gleaming) situated in one side of the ground and this creates a decent atmosphere, despite the 15,400 all seater stadium being largely empty. Two Kapo's work to get the Graz fans going and songs are sung about the clubs formation in 1902, about their enduring support; "Dritte Liga ist OK schiess egal" ("3rd division is ok, it doesn't matter"), the obligatory German language "schiess ein Tor fuer uns" (score a goal for us) and, naturally, songs against the opponents, and Sturm, "Ihr seid schiesse wie der SV Sturm." (you are shit, like SV Sturm) 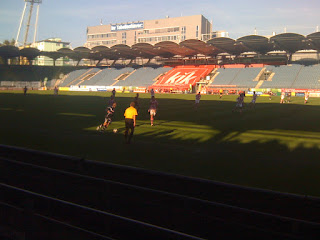 Token match shot.
Gleinstaetten defend resouletly for the first half and Graz fail to break down the defence. The Graz, Red Devil, mascot prowls pitchside and is probably the shittest mascot I've ever seen.....and I've seen Weymouth's 'Terry the Terra-dactyl' mascot - a man wrapped in a purple curtain. The Red Devil is a man dressed in full kit and with an ill fitting cheap beelezebub mask. Must try harder. 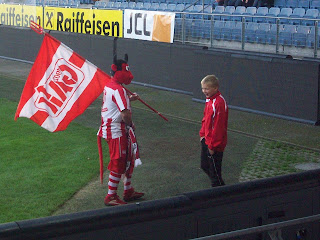 WORST.MASCOT.EVER
Half time sees a pack of kids appear and they work tirelessly to clean the stands of empty beer cups. They work as a team, those pitch side directing troops in the stand to ensure no freshly drained glass remains uncollected. Their spirit to cleanliness is noble but then the cent drops, they're after the Euro deposit for the glasses. Good for the environment and entrepreneurial spirit.

The 'Red Firm' and 'Graz Society' are given little to shout for in the second half, so the focus falls on the ref who appears to be in cahoots with the cup collecting kids as each increasingly controversial decision is greeted with a light showering of cups pitch side, which are then instantly fought over like pigeons chasing stale breadcrumbs in Trafalgar Square. 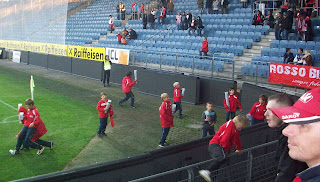 Insane scenes Geoff. *doffs AiT cap to kid vaulting into moat*
Gleinstaetten defend deep and break up play with numerous fouls and deny GAK chances, the first clear chance is hit just over on sixty five minutes. Despite the lack of action the Ultras continue their support and hope a couple of English chants may help things along. Sadly"Come On You Reds" (Come On You Reds) and "Ohhh GAK We Love You" ("Ohhh GAK We Love You") don't help and offering the ref a yeasty incentive by lobbing large amounts of beer in his direction doesn't persuade him to give a penalty shortly before the end.

When the Gleinstaetten keeper dives to get a GAK striker booked with the last foul of the game the fans are rightly outraged. The Red Devil runs behind the goal, rips off his mask, shakes his trident at the keeper and gives him barrels of abuse. The kids are ecstatic with the decision though, it's gonna be a night of endless ice cream and fizzy pop for them as untold riches rein down from the stands. 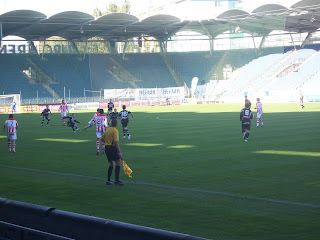 Token match shot II. Judgement Day.
The final whistle blows and the mascot storms onto the pitch and gets right in the face of the keeper, hundreds of plastic glasses thud down pitch side (a fair few after richocheting off young skulls first), a photographer steps into separate the devil from the keeper and the kids go into a frenzy to build their towers of glasses which, in some instances, are now as tall as them. 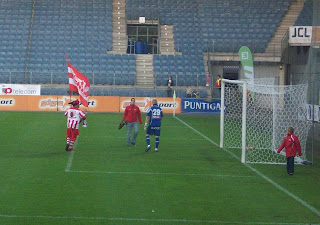 BEST.MASCOT.EVER. When Mascot's attack.
Banners are taken down, flags folded away ready and kids stagger under the weight of their new found wealth. Despite the draw GAK remain seven points clear at the top and look well placed to return to professional football. Maybe if they get into financial trouble again, perhaps in Ian Broudie sues for copyright infringement perhaps, they can be safe in the knowledge they can seek financial support from their generation of entrepreneurial fans. 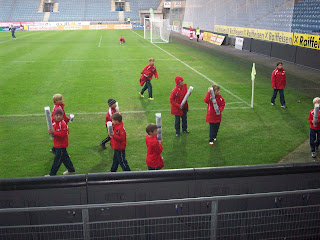 For match highlights click here, although I wouldn't waste your bandwidth to be honest.
Posted by Kenny Legg at 17:24