An Alternative To Love

Düsseldorf hates Cologne, Cologne hates Düsseldorf. It's how it is. 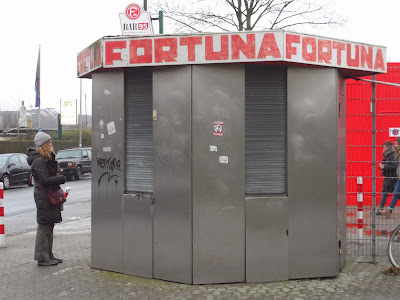 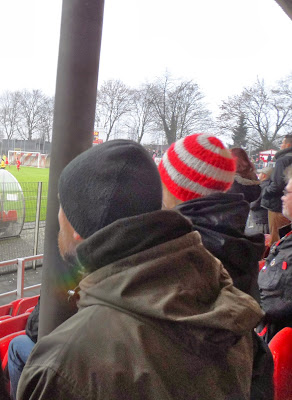 .....and superb sight lines of the action out on the pitch.

Even though this match is a fourth division game between Fortuna Düsseldorf's second side and the second biggest team in Cologne the above chant gets a vociferous airing at kick off. With the Fortuna first team playing 1. FC Cologne in three weeks it’s a convenient time to rehearse the chants, fire up the inner Hate-O-Matic 5000 and practice flipping the Stinkefinger. 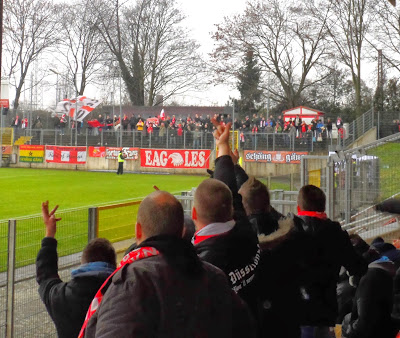 The above chant is a German favourite. It’s the Germanic, polite version of the excessively sweary English “You’re support is fucking shit”. Oh, the delicious japery of sitting in a crowd actually singing it to, barely audible, Fortuna Cologne fans. The majority of the away fans respond by flipping the perfect Stinkefinger.

While they’ve not got the loudest of fans they are largely acknowledged with having Germany’s oldest ultras group. The Fortuna Cologne "Eagles" were formed in 1986 by two Italians, named Renato and Marco (of course Renato and Marco), who were inspired by the “Lazio Eagles" ultras group. Here ends the facts section of the blog. 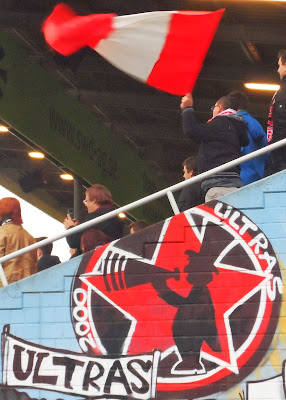 "What is this now, some sort of ultras blog or what?"

When Marcel Hofrath gives Düsseldorf the lead “Nelly The Elephant” booms out. Nelly. The. Elephant. If we must endure music after every bloody goal then jaunty jangly childhood songs are clearly the way forward.

Derby game, streaming rain, you’re down to ten men, midfield clogger powers in 30 yard last minute winner that Yeboah’s off the crossbar. Mild celebrations ensure. That is until the addition of “Wheels On The Bus” sends the crowd round and round into raptures all day long.

The away team are pumping you 0-6, your keeper’s been sent off, that shithouse former striker has scored a hat trick, most of the crowd have left, it’s pissing down and with two minutes to go your defender shins in a consolation. But wait. What’s that noise? Ahh, it’s “Ring A Ring O Roses” crackling through the PA. That’s cheered everyone up hasn’t it? Hold hands everyone! Football is only a silly game after all. 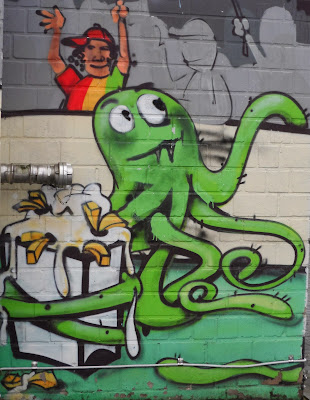 A memorial to Fortuna Düsseldorf's most famous fan, Gummy the two toothed octopus. An octopus famous for using washing up liquid to clean his chips.

Form a baying mob, pick an opposition player and make them pay for being on an opposing side by layering thick layers of abuse on them. Classic football fan-dom. Düsseldorf fans choose Cologne’s number 11, Tobias Steffan. This being Germany the abuse wasn’t spontaneous and had to be communicated effectively to all, and agreed upon by the majority, before it can commence. First one fan starts to sing “Alle auf der Elf”, then a block and then the whole crowd join in to signify their readiness to abuse the agreed target. Then, and only then, can the booing, whistling and jeering begin. Tobias Steffan cops the home fans full abusive repertoire. 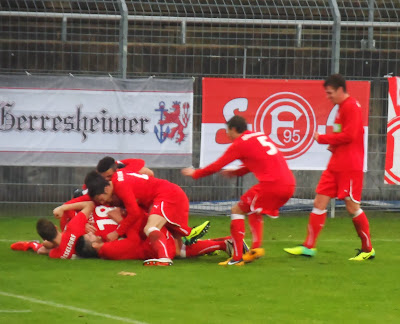 Shortly after he runs over to the stand, ears cupped and with a “fuck you” smirk on his face. A smirk that quite clearly states; “Screw you! Screw you Düsseldorf.  I just scored a goal against you and your pathetic city. A city which has nothing that can compare to the architectural splendour of our 765 year old Gothic style temple of worship and it’s two awe inspiring towers which, as I’m sure all you are aware, remain the second-tallest spires in Northern Europe after Ulm Minster.” The home fans are livid. This is an affront to Düsseldorf. This was not agreed during the terms and conditions of the agreed abuse. 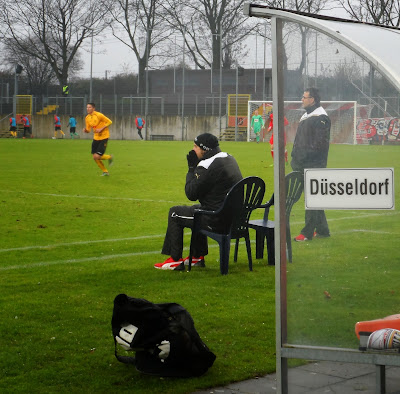 The home team bench there. A bench which is actually two plastic chairs. 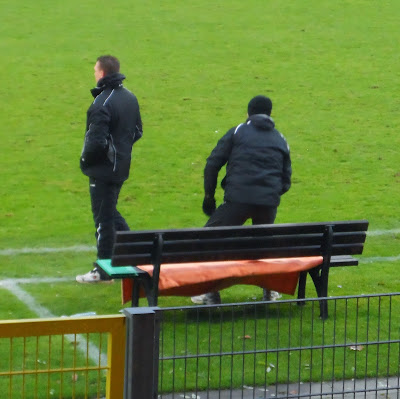 The away team bench there. A bench which is actually a bench.

Düsseldorf go back in front with eight minutes left. There’s now a real derby atmosphere. Düsseldorf’s assistant manager is sent off, there’s a melee, followed by a scuffle, Düsseldorf’s manager is sent off, there’s some pushing and (the always never far behind) shoving. Meanwhile, the Cologne manager stomps around furiously like an despondent Nelly The Elephant forced to spend her later years in a cramped, rusty cage before being coerced to do her “happy dance” thrice daily for a concerned, but nevertheless still applauding, crowd of middle aged picture happy tourists. The home fans bellow for their players to hold on to the lead, they bark at the opposition’s number eleven, the away fans are inaudible, the away goalkeeper is up for a free kick, the ball falls to him, he dribbles, he’s fouled. It’s the last kick of the game, the Cologne number 11 will take it. It’s all on the eleven.

The eleven curls it into the top corner. It was always going to happen like that. 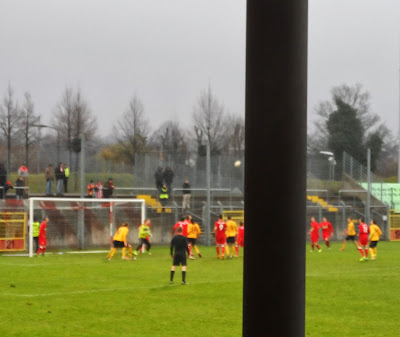 Once again Steffan celebrates by winding up the home fans, before becoming the base of a classic bundle/pile on. I maintain a look of disgust, while inwardly pissing myself laughing. Who doesn’t love it when a player sticks it to the fans? Obviously the goal needs accompanying music and, thrillingly, my mind’s inner jukebox (50p a song or 5 for £2) settles on “If You’re Happy And You Know It Clap Your Hands”.

The Eagles, and the other Cologne fans, are happy and they know it, and they really, REALLY wanna show it. They do show it. Steffan leads the fence clambering celebrations of the team. The fans are now clearly audible, "Alle auf der Elf, alle auf der Elf”. Take that Düsseldorf! Take that delicious irony you suckers, they (maybe) say.
Posted by Kenny Legg at 16:53 No comments: