Christmas, my birthday, International Speak Like a Pirate Day. All of these momentous occasions pale into insignificance when compared with the elation that greets the start of the European Football Weekends Oktoberfest; an annual big boys beano like The Inbetweeners Movie but with less girls and more floodlights.

I'll admit to being more than a wee bit excited about the chance to see Slovan Bratislava's former home, the now overgrown Tehelné pole. While circling the ground I'd made some new football friends (they're not my friends alright!!), including a legendary Norwegian who had quit his job and binned his filly to travel round watching European football (*doffs AiT cap*) and a couple of PSG fans. 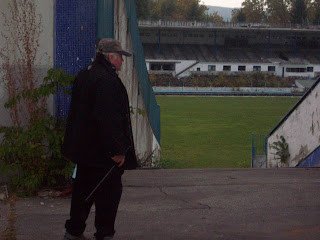 Sadly locating the magic door proved problematic, as did the presence of an angry security guard with a hefty baton and the dead eyed stare of a killer. With a group of fellow EFWers in sight in side I was so angry I could have sworn. For some decent pictures have a look here.

A few hours later my new my French friends (they're not my friends alright!!) and around 200 hundred of their onion necklace wearing pals were surrounded by about two hundred of Bratislava's constabulary and refused entry into the ground, despite having arranged their tickets through the club. It seems the police were a bit spooked about the presence of some of 'proper nawty' Boulogne Boys and the PSG fans were frogmarched (weak pun completely intended) to a pub in town. Subsequently some PSG fans have met with club officials to try and get full refunds. Poor form from Slovan there. 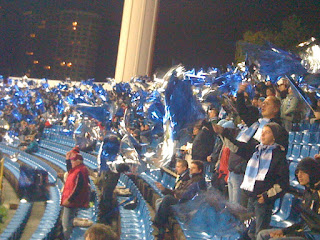 The Slovan fans were treated slightly better and given a free t-shirt and a shiny flag to wave as they entered the ground. With the excitement of a magpie in a milk bottle top factory, I snaffled a flag and and shook it like a Polaroid picture as the teams came out; as did all those Slovan fans who weren't stuffing themselves on huge bowls of popcorn and the Zbrojovka Brno Ultras to our right (more of Brno and their fans here) and this served to create an impressive display. 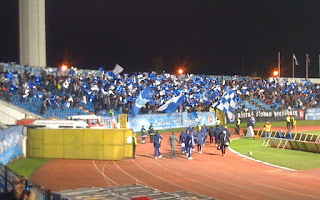 Sadly the match couldn't match up to the impressive initial atmosphere, well – that's what I gained from my occasional glance at the match. My legs were shaking, my eyes bulging and my hands sweaty (yes, I had had a beer) at the sight of a beautiful fire engine in the ground. Yes, a fire engine can be beautiful, especially when it's ramshackle, features wooden ladders on it's roof and is parked up in an Eastern European ground. Don't believe me, just ask Danny Last, he knows, and he's won awards. When I was a young tinpot adventurer eastern European football could only be seen on Des Lynam presented Grandstand and seemed to be played in another far flung grainy world, on pitches surrounded by humongous stands illuminated by hulking great floodlights with numerous pitchside emergency services vehicles. To live this in real life was exciting for me and shows that I mentally still live in the early 80's Grandstand studio. 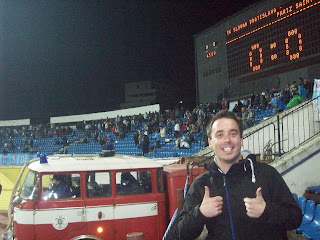 I can honestly say this was the second happiest I'd been in my life, the first being when I shook Welephant's paw at Weymouth carnival in 1986.

If that wasn't enough, and in fairness it probably more than enough, then my eyes were delighted when they clocked the monstrous scoreboard. The match was still 0-0, I knew this from regular checks of two giant zeros, made of smaller zero's which confirmed the score was, as I suspected, still 0-0. PSG, who according to the UEFA report of the game “arrived in chilly Bratislava looking for the gratifying warmth of victory”, were the better side but nothing much happened. So I used the forty five minute lull in proceedings to work out that this scoreboard contained a total of 12,500 bulbs. My workings are:

There are ten rows of squares.

Therefore the scoreboard equation, where x = floodlight bulbs, can be explained thus: 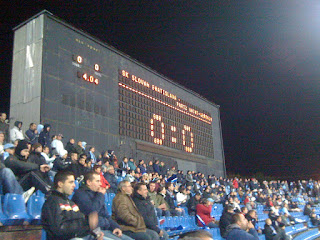 Half time sees the fireman head back into the vehicle, open a thermos, pull out some sandwiches and have a little pitchside picnic. I didn't know being a fireman could be this glamorous, it certainly wasn't all football and picnics for Assistant Divisional Officer (ADO) Nick 'Zorba' Georgiadis and Sub Officer John Hallam on London's Burning. 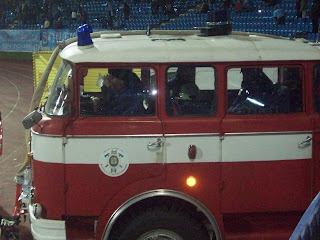 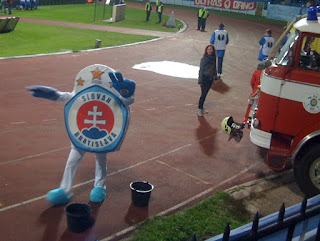 Fire engine + bizarre mascot = too much for me to take.

After 64 minutes English referee Lee Probert sent off PSG midfielder Clement Chantome for a second booking, despite this PSG looked more likely to score in front of the empty away section. Like Blackwall Fire Station's Blue Watch after Sub Officer John Hallam tragically died in a warehouse fire in 1996 PSG were reduced to nine men unexpectedly when Chico Tiene was sent off 80 minutes. 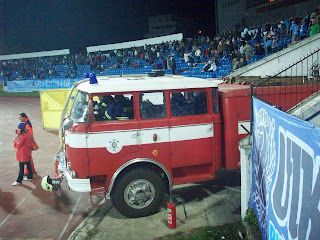 In a sensible moment here on AiT what followed after was a disgrace. Tiene's long walk off was accompanied by monkey chants from large number of the Slovan fans. It was disgusting, idiotic and made even more ridiculous by the fact Slovan had two black players, Bagayoko Mamadou and nationalised Slovakian international Karim Guede and in their own line up. This article on the excellent Britski Belasi website gives more information, including the complete lack of acknowledgement of the chants from UEFA or Slovan so far. 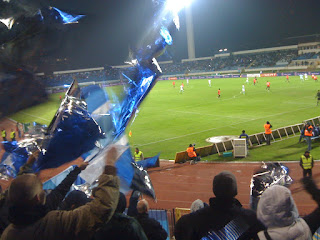 Slovan put some pressure on PSG but seem content with the point, the final whistle sounding shortly after a free kick pings off the aerial of an ambulance next to the fire engine and around 400 of the bulbs on the scoreboard report the final score as 0-0, which it was.

For a more comprehensive review of proceedings have a read of Stuart Fuller's report over on European Football Weekends.