The Green Green Grass Of Away

Reports before the big (arf) match showed a Cirencester Town manager angry that his players had lost on Saturday after “rolling over and having our tummy tickled” (aww-bless) and Weymouth's Byron Napper struggling with an infected grass burn (jeez!); which made manager Brendan King's observation that Weymouth weren't getting the "rub of the green" seem a little unfounded. 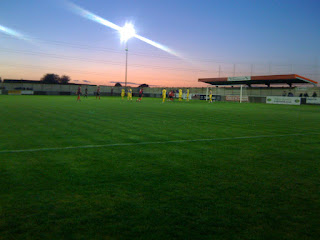 The green. Ready rubbed.
We arrived just before kick off, not beating the hordes to get in, not just in time to savour the atmosphere and not to take in the roar of the crowd as the teams lined up, as there is none of the above. However there is a man sporting a khaki jacket, whispy beard and a beret though (What a powerfully look that is sir. Rugged yet demonstrating a softer side to your personality. A doff of the new AiT beret to you.)

The first half was dire. Absolute shite from sliced kick off to over hit pass conclusion. No wonder these teams are stuck fast at the bottom of the Evostik Premier. It's going to take more than a tube of Evostik's finest Hard & Fast Metal Epoxy Putty to keep these teams in the league come May. The muted response to the game, from the few people there, is broken by the occasional shouts from the Cirencester manager, "ahhh that fucking fat linesman again", (he was fat - not quite as fat Kev over at Nailsea though), the proverbial howls of derision from the shivering supporters at numerous shocking shots on goal and the loud chime of realisation that another forty five minutes of this dross awaits. When an non playing (obviously) Cirencester player tweets saying “Worst game I've ever watched” you know it's pretty pretty pretty pretty bad. 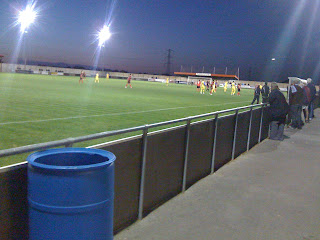 Foreground, rubbish.
Background, rubbish.
To the bar!! Where everyone agreed that we should probably just lock the doors, move all the furniture in front of the doors, pull down the blind, whack on a box set of Midsomer Murders, open some packets of Cheese Savouries and not bother going out for the second half. 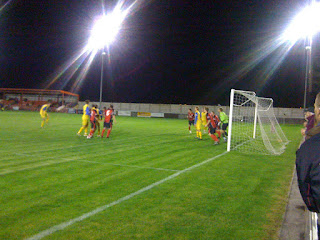 Token match shot.
Dear AiT reader. I'm sure you're familiar with the alcoholic tipple Aftershock. You must have even tried it? Possibly while trying to pull in the early hours of the morning in the dance floor section of a Walkabout pub, situated in a medium sized market town. The red one probably? Maybe even the blue? But did you know there's also an orange and a sliver one? No! Me neither. So, this trip offered an education in brain rotting alcoholic snifters if nothing else. Get yourself to the Corinium stadium in Cirencester, they've succeeded in accessing the secret codes for two previously undiscovered flavours of Aftershock. Ill take one of each and rinse it down with some Blackcurrant Chewits cheers landlord; a slightly odd choice of bar snack there Cirencester but good work on the Aftershock's. 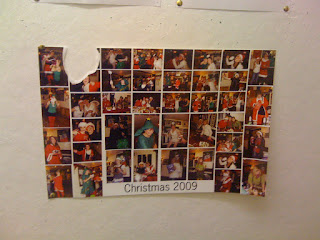 Well, someone lobbed a couple of traffic cones onto the pitch from outside the ground, narrowly missing some players - that was bizarre and outrageously tinpot. Yoofs probably. Hoodies. Probably off their minds on a violent cocktail of silver Aftershock and Chewits. Bring back the birch I say. *shakes angry fist*

Weymouth started to make half chances, from nowhere some chanting started and as a football fan you start to get that feeling that there might be a winner in this for us. Obviously, as a Weymouth fan that feeling is usually unfounded and easily diagnosed as a gaseous build up in the gastrointestinal tract but NO, not tonight. 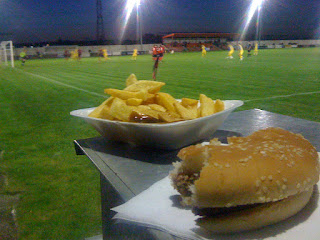 Too much greasy food can cause bloating and excessive gas.
Tonight is all about the last minute winner, that stupendous feeling. Your team have battled for 89 minutes, you've stood watching pish in the cold for 89 minutes and then the ball is cleared, then oddly chipped back up the sloping pitch by Marshallsay, your mate turns to you and says "what the fuck was that" and before you can lazily agree the ball slows in the grass ,gets caught under the defender's feet, Warren Byerley has snuck the ball under the keeper and WE'RE GOING MENTAL AT A LAST MINUTE WINNER, the team have piled on top of each other in celebration, I've done some weird air punchy thing, let out a little gas in excitement (oh, it was gas all along) and tonight we've not only got the rub of the green we've picked up the green and rubbed it in the defeated faces of Cirencester Town and every miserable pissing nano second of the excruciating previous 89 minutes is instantly forgotten!!

Then we went home. The end. Never speak of this match again.