5:20pm on the first game of the season and VfL Bochum fans were chanting the German version of “We are top of the league.” I was chanting it as well. I'm still humming it now.

I mumbled/chanted (munted) along with this superbly catchy chant. I can't shift it from my head now. 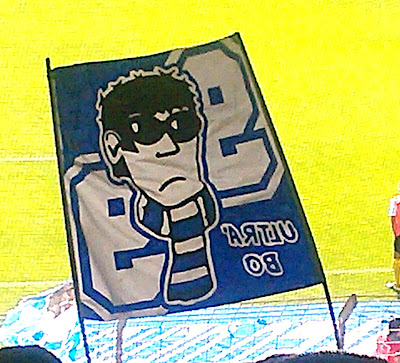 Why the delirium? Well, this was the first game of the season, everyone likes a new football season, and Bochum have just beaten Dynamo Dresden. No one likes Dynamo. Especially the DFB who have imposed 28 sentences again Dynamo since 2002 for the behaviour of their fans, culminating in being forced to play a game behind closed doors last season.
Not the best of days for Dynamo then and their two thousand fans. A round trip of over 1,000km for dick all except a few press ups under the watchful eye of the Polizei.  A tough season awaits them and even their website admits this “Nachdem Klassenerhalt ist vor dem Klassenerhalt.” (“after the relegation battle is before the relegation battle”) 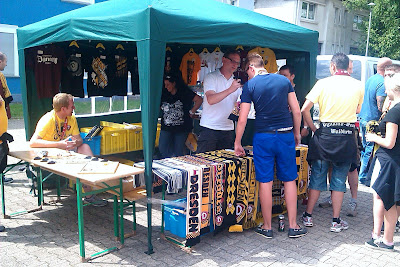 “Ultras Dynamo”, “SGD Hooligans”, “Devils Dynamo.” These flags and the large presence of police officers sat in the section next to the Dynamo fans add evidence to the hypothesis their supporters may be fans of mischief making. To my right Bochum fans display a banner of “VFL Kids Club” and one with a Christian fish sign. Hardly seems the basis for a fair fight. 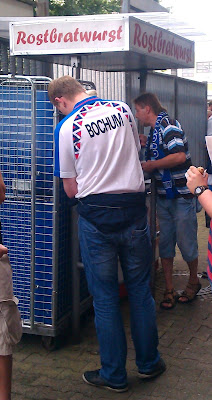 Welcome to Germany. From left to right. A man in a terrible shirt with a bum bag. A bratwurst stand. A man in sandals, sporting a mullet, buying a bratwurst.

Block A of the Bochum fans put on a tifo display. A nice bit of shiny blue and silver flag waving and a banner stating “auf in glanzende zeiten” (onto glittering times) as Bochum start a new challenge for promotion to the Bundesliga. The East Kurve fans behind the goal presented a banner criticising the lack of fan discussion in the recent meeting between representatives from the German Football Association, professional clubs and the German Interior Minister related to the behaviour of football fans. 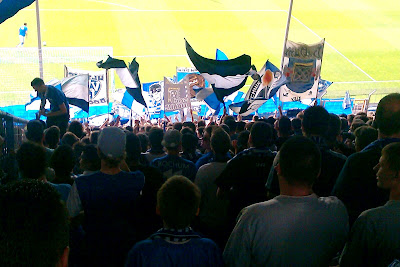 At this point the Bochum crowd were flagging a bit.


The Dresden fans also displayed a large banner. An upside down Bochum banner that they'd half inched during a gap in their strict pre match exercise regime. It seemed only right that I joined in with 10,000 Bochum fans in a tear jerking rendition of “Scheiss Dynamo, Scheiss Dynamo” as the match kicked off. 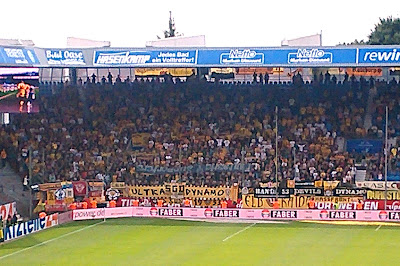 If you have the eye sight of a hawk that's just been for laser eye surgery you may notice the slightly blue Bochum flag at the front of the Dynamo fans.


Bochum had drummers. Four of them half way up the terrace. They led chants, they helped build chants, they supported their first pumping, hand clapping, megaphone bellowing capo to create and maintain the atmosphere, not shit all over it - Hi England band. The capo missed Mickael Poté of Benin prodding in the opener for Dynamo right his fence perched arse on 28 minutes. He'd also missed Bochum having all of the play, forcing numerous corners, dominating possession yet still being a goal down at the break. 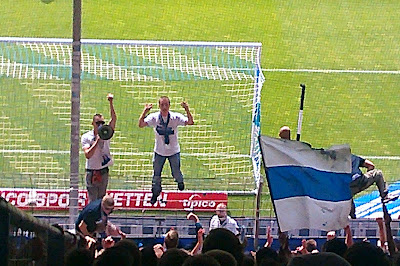 At half time the Dynamo fans lived up to their fearsome reputation with a terrifying, sickening act. Someone stole the cash box from the Bratwurst stand. This is serious. In Germany no one fucks with the availability of bratwurst. The repercussions of this could be huge. There is talk already (in my head) of Dynamo being forced to play a game without a Bratwurst being sold within a 3km radius of the ground. Something that really doesn't bear contemplation. *shudders*

In the second half Bochum showed more attacking purpose, posed more of a threat and equalised through 17 year old whippersnapper Leon Goretzka. This led to some superb fence climbing, rattling of safety nets, flag waving and, tragically, the throwing of beer. 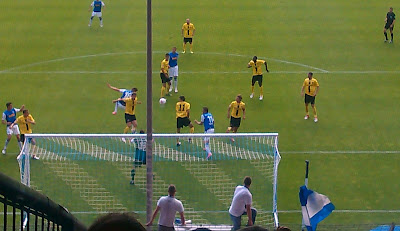 The Dynamo fans responded by twirling their shirts above their heads (some fans clearly showing signs of malnutrition due to the unexpected lack of pig in a stale bread roll),  parading a bed sheet with a drawing of a coffin with DFB on it and waving a DDR flag. As a motivation tools these three were rubbish. On the 85 minute Paul Freier thoroughly wallops in a volley to give Bochum their deserved victory. 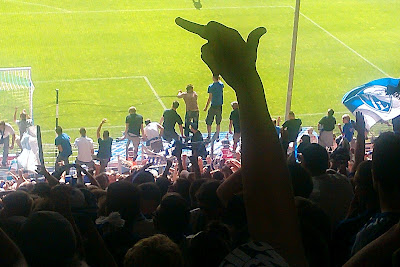 Next stop the train station. For the Bochum fans this meant a leisurely stroll with victory providing an extra spring in the sandle and sock adorned steps. For the hungry Dresden fans this meant a march surrounded by the good folk from the local Polizei, including one overly polite Police officer let loose on the PA van; “keep moving onwards to the train station”, “don't react to any protraction”, “we are here for your safety” and “we wish you a good onward journey.” How friendly of them.

So it turns out beer and standing on a terrace singing in a language that remains largely a mystery can be lots of fun. Who knew?

**This chant is also available in a terrible electro version that even Toni Di Bart would have deemed a little bit shite. It comes badly mixed with commentary, is dragged out for far too long and has a music video that is a picture of a tram here.
Posted by Kenny Legg at 19:29