When the opportunity arose to go and watch a Austrian 3rd division match I was fairly interested. When I found out DVS Loeben have their own rap song I was keener than R Kelly at a School Disco. The hills are alive with the sound of music and that music is Austrian rap! Oh yes. 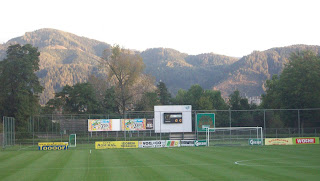 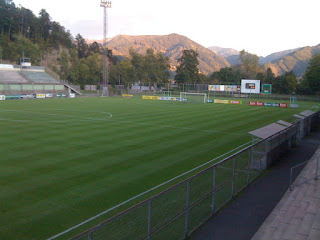 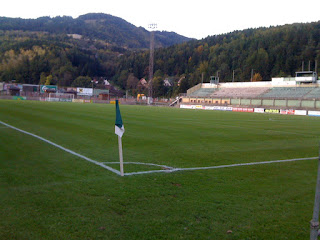 I am not a groundhopper.
It was a trip well worth making. The 6000 capacity Donawitz Stadium is superb, with two long stands on either touchline directing the focus to the stunning views of tree lined hills set against bright blue skies behind each goal. Around three sides of the ground are small steps and behind one goal stand five small sheds which suggested a premature Christmas market could break out at any time. 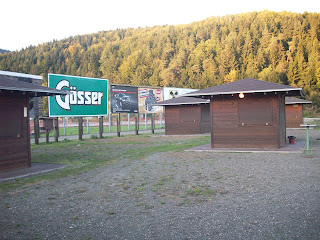 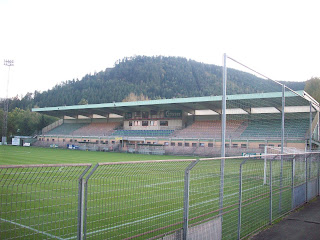 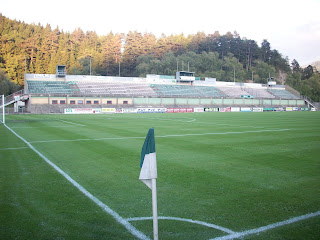 They are a bit behind the times in Austria. It's still legal to smoke in bars, sadly, so when the third Cumulo nimbus cloud formed in my face it was time to depart The Volley Bar', which really was more of a half volley as it was full to capacity with 12 people in it. It's also still legal to have a mullet haircut, thankfully, and men are sat in barbers in Vienna and beyond clutching and pointing at pictures of their style icon, Toni Polster circa Italia 1990. I counted 5 (funf) mullets and was ecstatic to see a man coiffured like Terry Nutkins. 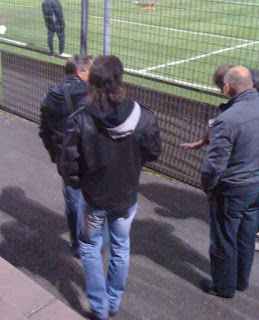 Textbook mullet. *stands and applauds*
The rap song, some say track, is given a spin, some say rotation shortly before kick off and is predictably woeful. The rap is from MC Shabusta, who is also the stadium announcer (real name: Gernot Tändler) and is titled 'Der geilste Klub der Welt' (The greatest club in the world) which is clearly a lie. A massive lie. Why not have a listen here. 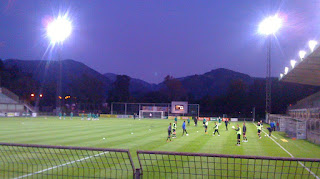 I am not a groundhopper.
According to the club website “The rap will appeal to younger visitors at the stadium and will not be seen as competing with the DSV song by "Johnny & Mary", which is soon available for sale.” Someone phone iTunes, this is going to break the internet. I'm lucky I get to hear both. The second club song has the chorus "Wir sind dabei bei DSV" (we are there with the DSV) and is sung Mary, who I imagine is probably in her mid 40's and works long days as a glamorous shift supervisor in a frozen food warehouse. A banner with the words 'Green Elite' is hauled from one of the garden sheds and stuck to a railing and we're ready to spiel fussball ja! 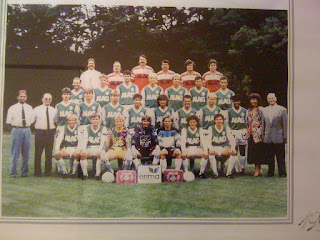 The DSV Loeben team from 1980. Click and enlarge to have a look at that womens suit jacket. Please wear protective glasses.
Loeben line up with a Vier-Vier-Zwei formation and the Sturm kids go with Funf-Drei-Zwei. Loeben's tactics focus around their left (links) back. He receives the ball from every goal kick to instigate attacks and when he hasn't got the ball he focuses on booting the opposition. 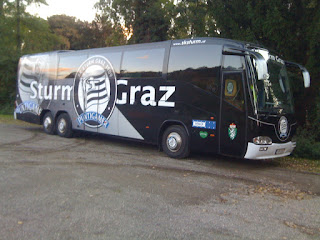 Token non shot of hills.
As the match continues Austrian radio booms from the one garden shed selling beers to their solitary customer; one hammered non mullet sporting bloke. He chants " hier regiert der SV Sturm" (SV Sturm rein here) to no one and breaks out some ironic dance moves, while everyone else moves only to shiver. Cold beers are offered to cold fans by a couple of cold small kids walking around the terraces with what looks like an adapted joiner's toolbox full of pints and a basket full of pretzels just before half time. No one buys anything and I'm shaking like a shitting dog by now.

A bit of Lady Gaga on the shed jukebox signals the start of the second half and Loeben push forward, sadly their corners are shocking, three in quick succession slapping the forehead of the first Graz defender. Graz should have taken the lead after an hour but over indulge themselves by trying to walk the ball in and after that the play is all Loeben. 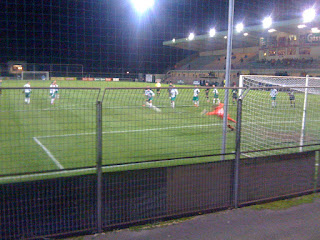 Token match shot.
They bring on Marco Pigneter, a tricky winger, and his dribbling and crossing ability causes all number of problems for Sturm and I'm willing them to score. Chances hit the post and shots are desperatwly hacked off the line then, on 89 minutes, the Sturm keeper fails to hold the ball and Norbert Kerek taps in the rebound before sprinting away leading wild celebrations from the team and their mulleted fans. 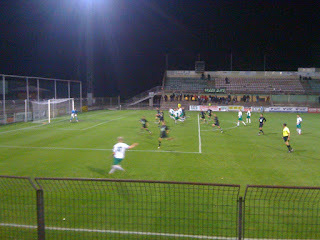 Der Tricky winger or, as the German say, der Tricky vinger.
Sadly, once again the sound of music rings out across the Donawitz Stadium and that sounds is the pissing Fratellis, this time even those permed scottish berks can't spoil what's been a great evening's entertainment in superb surroundings. I mean the mullets, not the hills - just to clarify. I've not gone soft and neither am I a groundhopper!

For a proper match report and pictures clicky here.
Posted by Kenny Legg at 16:15