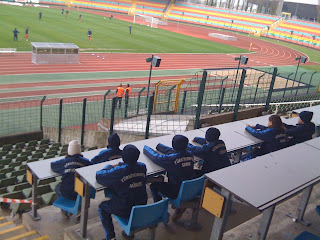 After unfavourable press reports Türkiyemspor officials react by super gluing journalists to the table.
Türkiyemspor began as a club in 1978 as a focus for the Turkish community in Berlin and have played predominantly in the 3rd and 4th tiers of German football since then. They narrowly missed out on promotion to the 2. Liga in 1990/1 after an administrative error by the Berlin Football Federation which saw rivals, Tennis Borussia Berlin, promoted instead. Since then attendances have declined, the team have to play their home games away from their traditional home of the Katzbachstadion and, according to the wonderful Abseits Guide to German football, have earned the nickname of the "Zehnmonatsklub" (ten month club") due to their continued inability to play players wages, something my club Weymouth are also familiar with.

Sadly there was nowhere to purchase any Türkiyemspor tat, not even a programme. With average attendances somewhere around the 100 mark it's probably not worth producing much tat. Shame as I quite fancied a scarf which, as tradition dictates, I would have lovingly worn for the duration of the match, maybe on the S-Bahn back to the hotel and then shoved in a drawer at home that now represents a retirement home for unloved and neglected football scarfs. A drawer whose contents, if knitted together, could be used to separate Berlin into 2 distinct areas again, the Berlin wool if you will. Sorry. 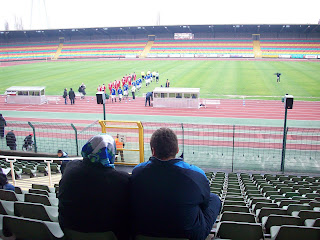 This years fashion must have, the official Türkiyemspor Berlin headscarf.
On the plus side Türkiyemspor Berlin did sell beer and sausages, however the sausage I had the misfortune to purchase had seemingly been kept warm there since communism was still in fashion and was rancid. Still ate it though. Of course. A theme to these blogs is building here, a quick mathematical equation that utilises both the tan and sin functions of my Casio FX 991 calculator reveals I have mentioned food in 89.7333333% of my blogs. 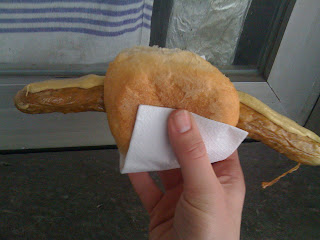 Brat-worst. Ha, see what I've done there...
HSV II have a few fans here. Türkiyemspor Berlin have a few ball boys and a couple of confused onlookers but it's a very sparse crowd and the only noise coming from the HSV fans. I say noise, it's more of a slightly louder than usual mumble, their chants barely drowning out the shouts between the cold and bored ball boys dotted around the running track that circles the pitch and despite their only being 6 of them they can't even keep time during the simplest of chants, H-S-V, H-S-V (repeat to fade). 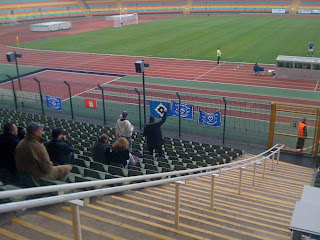 On your own, on YOUR OWN!!
Things pick up on the chanting front after HSV take a deserved lead on 40 minutes through their number nine Tunay Torun, with the HSV fans reacting like a self appointed pools panel and chanting, in unison, Auswartseig, Auswartseig (away win, away win). The Türkiyemspor Berlin team see this as less an expectant prediction and more an order and deploy some embarrassing defending that allows Torun to score again. Remember the name, you heard it hear first, unless you heard it somewhere else, in which case fine well done, but maybe you should consider getting out more? Winky face.

And that's about that really. Türkiyemspor Berlin never really looked like scoring, their fans never looked like raising a voice and the HSV fans regaled us all with their sublime vocal talents and staggering musical repertoire for the rest of the match. Their moving rendition of "I'm Hamburg 'til I Die" in a collective bizarre accent resembling that of an inebriated westcountry simpleton had already lived too long in the memory by the time they stopped singing the song. 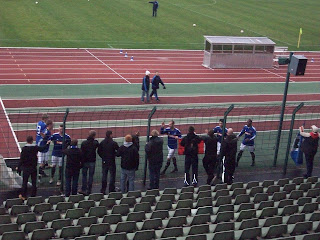 That high five, ole thing that all German clubs do.
Posted by Kenny Legg at 18:25