Undercover in East Berlin with Bob der Baumeister, Nina (not Nena) Hagen and the Stasi

The above phrase is heartily sung by the Union Berlin fans before every match and the slogan proudly adorns the top of the newly refurbished home end. A home end, along with the rest of the stadium, that was refurbished by the Union fans themselves and highlights the love and pride the fans have for their club.

In the 2008/9 season Union played their home games at the Friedrich Ludwig Jahn Sportpark a season that ended in promotion to the 2. Bundesliga, as a team of over 2000 fans assisted with the rebuilding of terraces across three sides of the ground and the erection of roofs at the Stadion An der Alten Försterei. Thankfully the volunteers turned out to have the skills of Bob der Baumeister rather than Laurel und Hardy and the stadium is a credit to their efforts. 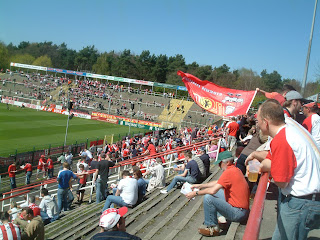 The AF in 2005. Plenty of grass growing through the terraces and no roof. 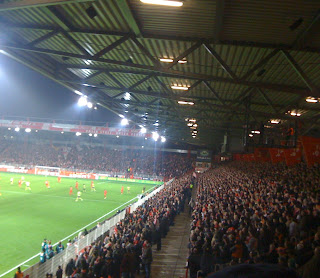 2010. Observe. A roof has appeared.
More pictures from the building of the stadium can be seen here and more details here.

Another reason for Union fans to have pride in their club is their anti DDR stand in the communist era in East Berlin. Throughout this period the club attracted 'non conformists' to the DDR regime and the club suffered as their great rivals, Dynamo Berlin, received support from East Germany's Secret Service (Stasi) and won, fairly and squarely of course, ten consecutive titles from 1979 to 1988. The club continues to maintain this stance and in 2009 cancelled a lucrative sponsorship deal with International Sport Promotion as it was revealed the organisations chairman was a former Stasi agent. 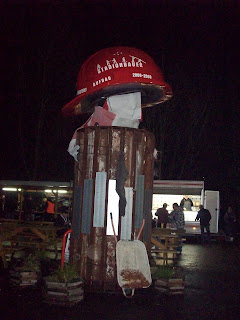 A monument to those Union supporters that helped to redevelop the ground. Also, and sadly tantalisingly out of reach, the only hat that would fit my massive head.
Shame the Union fans construction skills couldn't stretch to sticking down some concrete on the route, through the woods, to the ground. Part time Bavarian folk singer, part time bingo caller and full time EFW stalwart Michael "Stoffers" Stoffl and myself were at severe risk of trench foot, with my flimsy Converse trainers having similar waterproof qualities to a sponge meaning I was woefully ill equipped to cope with the large muddy puddles that helpfully marked the way to the ground. There was also, for me anyway, a real fear of stacking it and ending up looking like Stig of the Dump. 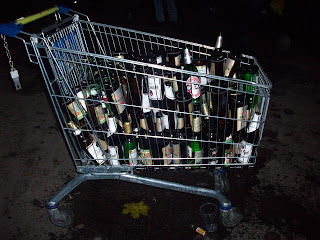 German recycling efficiency at it's finest.
The Union fans have suffered for their team this season, with more than their fair share of games being moved to the absurd time of 6pm on a Friday for TV coverage, including a 800km round trip to Bielefeld, with other games moved to Monday nights and away from the traditional 15:30 on a Saturday slot. Still Stoffers and me found time for a couple of pre match liverners, a chat with the locals and the obligatory bratwurst. 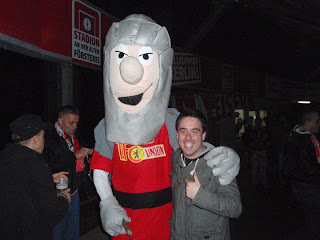 Meeting the locals.
Also worth sparing a thought for the Düsseldorf fans, not only do they live in place that one forgotten umlaut suddenly translates a 'idiot village', but they've had to travel 600km to get here and have turned out in numbers, around 500 village idiots making the journey. *doths cap* 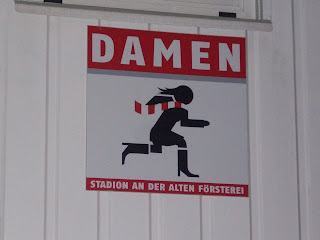 The female Union fan in this photo was so desperate for the toilet that her scarf almost strangled her, her legs shattered at the knee caps and she regained conscious slumped in a puddle of her own piss.
As a result of these ridiculous kick off times over 6000 German fans, from 50 different clubs, recently gathered together in Berlin to protest at the erosion if German fan culture, due to changes to kick off times for TV, increases in ticket prices, stadium banning orders and heavy handed policing, with Union fans playing a prominent role in the demo. I'd love to say that something like this could happen in England, bit with fan culture largely obliterated by all seater stadia and the prevailing culture of high prices, prawn sandwiches and the anodyne fan it's probably fair to say it ain't gonna happen.

Some fantastic pictures from the protest here. 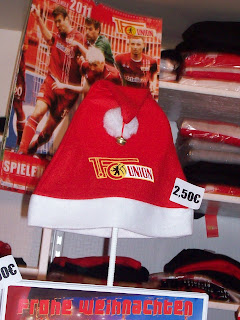 This seasons fashion must have, the Union Berlin Christkindl hat. Not suitable for use on a building site. You need a hat hard on for that.
Another reason for loving Union is the heavy metal style official club song, "Eisern Union", sung by Nina (not Nena of 99 red balloons fame) Hagen. As usual the song was belted out with gusto, however other than that the atmosphere throughout the game was quiet, except for the odd 'Scheiss Fortuna' chant, perhaps due to the early kick off time and probably also due to the lack of any major incident in the match until a foul throw around the hour mark. There were, sadly, no large flags on display, no tifo displays and no banners protesting against the ridiculous kick off time as there have been at previous matches.

Union deservedly won the cagey match with a goal in the 64th minute from captain Torsten Mattuschka with a shot from just outside the area that the Idiot Village keeper let slip under his body. How can I be sure it was a keeping error? Thankfully I was able to watch the highlights on TV in the warm 'Abseitsfalle' Bar afterwards with a tall frosty beer and few hundred Union fans. I bloody love TV. Ironic winky face.

For more pictures on the match click here. Don't worry, they're by a proper photographer and not mine.

For more details on a previous trip to Union Berlin point and click your mouse in this area here. 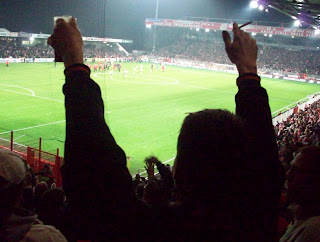 Celebrating victory with a mulled wine and a smoke.
Posted by Kenny Legg at 21:11