No Limits to the excitement at The Memorial Ground fun day

If I've learnt anything from Whitney Houston it's that the children are our future.

No doubt Bristol Rovers had this in mind when they decided to bring forward the kick off of this largely pointless match to 7:15pm and gave away free tickets so more weiner kids could attend (never mind that I had to miss Hollyoaks - oh no!) giving this fixture an element of a family fun day to it. 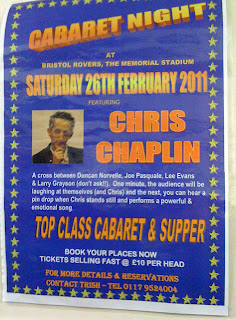 For tickets contact Trish on 0117 9524004. That's 0117 9524004.
Exeter captain Steve Tully is one of my favourite ever Weymouth players, always giving 100% for the club and for being an important part of our Conference South championship winning side. His presence gave me a legitimate reason for being at this match I feel. Steve is also the victim of some genius Wikipedia vandalism, which is at the end of this blog, in Annex One, in case it's vanished from the computer internet.

Also playing were ex Weymouth players Richard Logan, now at Exeter (or Exterra if you prefer - phnar!) and Rovers defender Gary Sawyer. These days it comes as no surprise to see a player who has played for the Radipole Lane based outfit appearing in any given match, it's like looking at the night sky and being surprised to see stars.
The Exeter fans have decided to embrace the family fun day staple of the 'wacky hat' for this match. Honestly, what makes it acceptable to wear ridiculous head wear at knock out football matches? Maybe they have an excuse, their manager Paul Tisdale is often seen wearing a bit of fancy dan clothing, including this deer stalker at Saturdays '6 fingers derby' match against Plymouth Argyle. 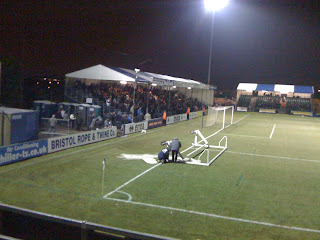 The Exeter City away end fun day marquee.
As with any good family fun day there's a bloody good sing along. A series of awful tenny bopper tunes and soddin' Christmas songs boomed out over Rovers' ramshackle PA system, which was clearly cranked up to 11 (eleven) by an evil tinnitus cure salesman seeking to successfully sell his product from the back of his Mondeo to the unsuspecting crowd of young bumpkins after the match, the rouge.
The musical theme continues with Rovers fans singing their traditional club song of 'Goodnight Irene', which tonight coincidentally doubles up as a lullaby for 7 year old diehard 'Gashead' Irene Holloway who, despite the early kick off and her bedroom backing onto the ground, wasn't allowed to attend and sent straight to bed after CBeebies by her strict bedtime imposing parents.
Every half decent, non PC, fun day should have a midget. This one is no exception as a female midget is allowed to run the line. Hilariously she wasn't tall enough to check the top of the goal net and kick off was delayed while a stepladder was brought out. I shit you not. 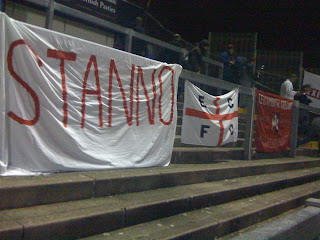 Adam Stansfield. RIP.
It's been a while since I'd been amongst a football crowd of this size and one that spoke a language I was more than vaguely familiar with, and it was a pleasure to get re-aquainted with a couple of stereotype football fans amongst the Exeter support.
Fan stereotype number 1 - Frustrated Manager Fan.
This fan would be able to step in for Paul Tisdale whenever he needed to nip off for one of his 8 mid match costume changes. All midfielders were encouraged to "Hassle 'em! Hassle 'em!" (doth of cap in direction of Danny Baker), any player within a radius of 57 yards of the goal was encouraged to "SHOOOOOOOOOT", or"'IT IT" and at least 3 long tactical sermons concluded with a phrase made famous by the revered Russian tactician Aleksandr 'Compare the Meerkat' Orlov of "Simples". Chump.

Fan stereotype number 2 - Frustrated Comedian Fan.
Every fun day needs a dodgy comedian. The type of person who is a mild mannered accountant and hen pecked husband by day but stick them in front of a football fans and they risk causing (in their humourless minds at least) a mass splitting of sides with their sparkling comedy repertoire. Exeter's FCFs nadir was noticing that the linesman was holding his flag so that the pole was dangling between his thighs " Look, the linesman's got a stiffy.... LOOK EVERYONE THE LINESMAN HAS GOT A STIFFY...ehhh...STIFFY". Not even the kids laughed. After looking around forlornly he decided to counter with a volley of abuse towards the linesman; "you yellow shirt wearing prick". This got a laugh from me.
Tully Watch - First Half: - He does his usual pre match gee up of the players, runs about a bit but generally doesn't contribute much. 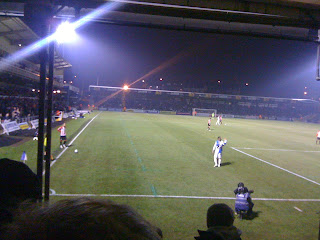 Token match shot.
Half time contains the standard funday raffle for a leg of lamb and a box of Matchmakers before the sing along fun of the second half commences. First up Exeter's Troy Archibald Henville gets his absurdly posh name sung to the tune of Seven Nation Army by The White Stripes. Troy also gets a certificate, which I award mentally, which sees him added to the list of players I thought were white but are actually black.
Next up for a song is Richard 'Loags' Logan. 'Loags' is a nickname given to him by the Exeter fans, with Weymouth fans preferring to refer to him as 'that useless lummox mercenary donkey piece of shit'. However he's obviously done well for himself at Exterra and has become the subject of my favourite football/90's Europop cross over moment since my friend Shed tried to get Weymouth fans to sing 'Nade, Nade, Rapheal Nade' to the tune of SL2'S 1992 smash hit 'On A Ragga Tip'. Sadly, like sensible long term financial planning at Weymouth, it didn't catch on. 'Loags' gets his name adapted to fit the complicated lyrics to 2 Unlimited's seminal 1993 classic 'No Limits'. Lo Lo Lo Lo.....surely you get the idea? Bloody genius. Techno, Techno, Techno, Techno!!

Am impromptu fun day game of 'Pin the blame on the Donkey' vociferously breaks out after "Loags" recreates his Weymouth form and falls over whilst one on one with the Rovers keeper, misses a sitter and then fails with a pathetic and piss funny attempt at an overhead kick as Exeter push for an equaliser. The useless tit. Luckily for "Loags" Exeter get a last minute equaliser to take the game to penalties, no extra time, presumably so the kids can get home and off to bed.
Tully Watch - Second Half: - More like the Tully of the prime, some say pomp, of his career. Numerous runs down the right flank, some intricate passing and some great crosses. He wasn't caught out of position for either of Rovers' goals...like HE WAS AGAINST NOTTINGHAM FOREST AT THE WESSEX WHEN WE COULD HAVE BEAT THEM AND THEN IT ALL WENT DOWNHILL AND NOW WERE BOTTOM OF THE ZAMARETTO LEAGUE.....Let it go Kenny, let it go. Breath. It wasn't Steve's fault.
It's an emotional moment for me as I witness, I think, my first ever penalty shoot out and you really couldn't have asked for a more important occasion than this. "Loags" is quite rightly kept a safe distance from the penalties and Exeter's Richard Duffy scores the winning goal which prompts wild scenes as hundreds of adults take their kids off home as quickly as possible and Grecians fans celebrate getting through to the tinpaintpot southern zone final. 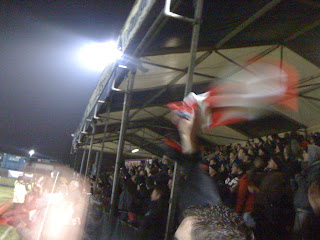 This guy celebrated so hard his hand went see through.
Got any more ideas for 90's dance music/football player chant cross overs. Anything re-working the lyrcis from musical giants such as Haddaway, the Urban Cookie Collective, Chaka Demus & Pliers maybe? Leave me a comment below then, thank you.
Annex One:
"Steve is a regular customer at Argos Exeter and has been recognised by the store as customer of the year for the last 6 years. Former Argos employee Matthew Smith commented "Steve has been a great customer to us over the last 6 years and he has contributed over 0.0000001% of our total sales during this period. Steve is to Argos as Nelson Mandela is to Africa. We thank Steve for all he has given us."
Posted by Kenny Legg at 18:22