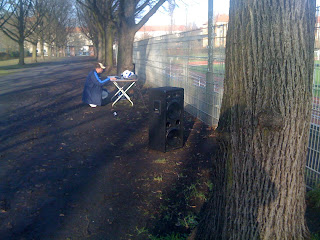 The stadium itself is set amongst a sports complex with a small stand with seats having their own little covers to keep them warm. Either side of the stand are large areas of terracing, and around the outside of the pitch an athletics track and the obligatory German muddy area for spectators to navigate-oh and of course, 3 wooden benches on a grass verge. 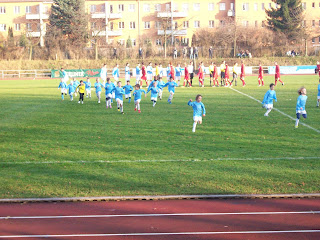 To a child this lot raced straight out of the stadium. 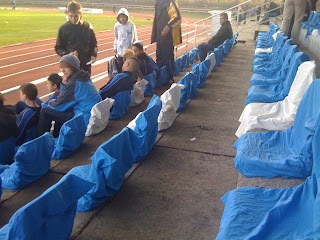 The seats have their own little jackets to keep them warm.

It seems strange things happen in this part of town. A series of fashion crimes were noted amongst the crowd of 108. A couple of mullets, 2 bum bags, a Merv Hughes style moustache, a man so outrageously orange he resembled a space hopper with a bad spray tan, a horrific bleached blonde Mohican/mullet cross over that my eyes just won't forget and a man sporting a beret so large in circumference that if he crouched down it could have been used to hold a 14 man business meeting and still have room for an oil tanker to turn around without disturbing the meeting. 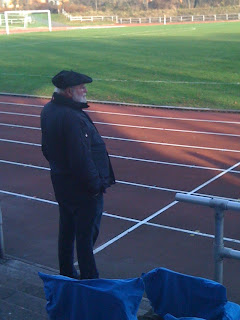 World largest headgear.
The fashion crimes weren't limited to the spectators. One of the linesmen decided to get in on the act by sporting glasses and also also gloves. Nothing wrong with gloves, it was pretty bastard cold, however these gloves weren't in the traditional place of his hands and were tucked into his shorts with the fingers just poking out from the top of his shorts like some very inappropriate child's puppetry routine that the relevant authorities really should be told about. 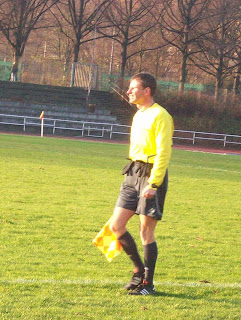 A small child seeks to clamber out of the linesmans pants.
For the first half I stood opposite the main stand on the grass bank in an attempt to get warm from the last bits of sun. It was clear that everyone had their own particular tree that they liked to lean against, or their own bench to pass rich tactical insight on the game. All except one couple, who really didn't seem bothered on watching Viktoria Berlin maintain their lead at the top of the Verbandsliga Berlin table and more intent on getting as close as possible to each other and showing support for the team by constantly kissing, hugging and giggling. 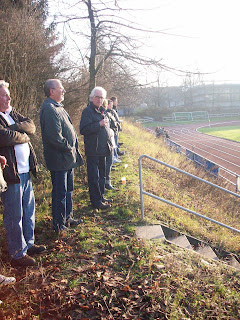 The atmosphere was tense, even the doggers stopped and watched as the wonderfully named Micheal Fuss, (of course Michael Fuss) stepped up and dispatched the penalty and led to the Hermsdorf manager again spazzing out on the sidelines. 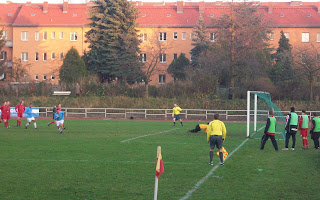 Token match shot. Strrriker!!! Toooorrrr!!
The second half plodded along, the crowd of spectators/dogging enthusiasts on the far side dwindled as the sun fell. A few hardy (ha!) souls toughed it out on the grass bank in the hope something might come up (phnar!) and they might see a cheeky bit of nipple...or that, more importantly of course, VB would get a second goal to seal the game. Which they did. Which was nice.

I'm writing this at the airport on the way back home, it's 8pm and I dread to think what sexual freakery that couple are now up to on that bench with their other deviant fashion misfits friends while the linesman watches, with his glasses slowly steaming up.
Posted by Kenny Legg at 20:40