11 ways to leave your football match.

Hibernian v St. Johnstone
Saturday 27th November 2010
Scottish Premier League
Easter Road Stadium, Edinburgh
Attendance 10,248
Sometimes when attending a football match you know its a bad idea, you know it'll be horrifcally shit. This match was one such occasion. So was this one. But, at the risk of loss of man points, there's no way any of the 4 of us were backing out of a game that our attendance was enthusiastically (drunkenly) agreed upon 3 months ago. A match that one friend had cleared his diary for and another had successfully secured a fun pass from his wife, a decision even more shocking as he is one of those questionable types who have no interest in the game we call football.

A number of potential ways out of the game offered themselves in advance.

1. The fact that this was a match, as clearly advertised, involving two teams from Scotland should have been enough for us to agree to casually drop the idea, but no.

2. A golden opportunity to make alternative plans was offered on the eve of the match when the only one of us who had any interest in the game had to drop out. But no, the remaining three of us made the journey from Glasgow full of a sense of impending doom. 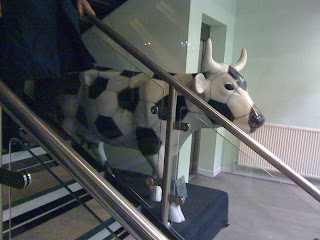 A cow wearing a football, presumably on its way to be slaughtered round the back of the catering outlet before being served up to the locals. Scots will eat anything.
3. Even the Scottish referees knew this game was going to be, as the locals say, pish, and decided to strike for this round of fixtures as no one wanted to draw the metaphorical short straw and have to officiate this particular match. For a while it looked like the match might not go ahead, but step forward Christian Lautier of Malta who happened to be passing by and agreed to referee at the last minute. Yeah, cheers Christian you scab!!

4. It was snowing. "Don't travel unless your journey is absolutely necessary" the TV weatherman said. Was a trip to Edinburgh to watch two mediocre Scottish teams that none of us cared a jot about necessary? Apparently bloody so. 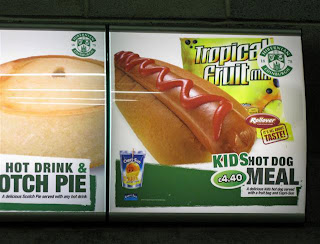 A kid shot dog meal? Eh, no thanks. Scots really will eat anything.
Thanks to Ken Gordon of Impermanence Indeed for the picture.
5. 22 (twenty two) of your Scottish pounds (current exchange rate with the superior English pound 1-1) for a ticket...again, for a game NO ONE was interested in. Surely we'd baulk at the price? Nope, we are men and we are here to watch the football and nothing must distract us. Arse.

Once in the Easter Road tundra a series of other escape options offered themselves to us.

6. Food poisoning. Do not eat the Easter Road Scotch Pie. My guts very nearly instantly collapsed in on themselves after attempting to digest this. Sadly though sitting on a cold chair in the ground seemed to instantly freeze the contents of my stomach and nothing moved (upwards or downwards seeing you asked) and my plan of vomiting over an unsuspecting, spotty 15 year old St. Johns ambulance volunteer whilst being led out of the ground to a warm hospital ward were dashed. 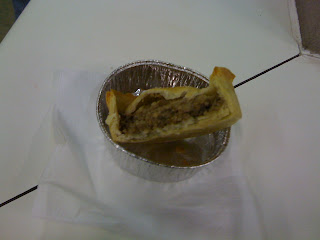 This is my main offender. Scotch Pie. Does not contain scotch. Scots will eat anything.
7. Not long after entering the ground a tannoy told us all to behave and not to shout any "football related abuse" as we risked being ejected and a ten year football banning order. If I knew the horrors that awaited me I would have instantly opened my potty mouth and unleashed a torrent of almighty football related profanities direct into the ear lobe of the nearest steward.

Quite what constitutes "football related abuse" I'm not sure. As I saw no one being booted out I can only assume it's not "Neil Lennon is a wanker", as sung in unison by both sets of fans, nor is it "referee you're a big fat goats head', as shrilly shouted by a partially frozen child behind me in the second half.

8a. The advertising signs at Ice Station One (aka Easter Road) offered some suggestions of escape routes. " Give blood" suggested one. Ten minutes in and the idea of having a sharp needle jabbed in my arm in return for a cup of hot tea and a Club biscuit seemed a Rhesus positive one. 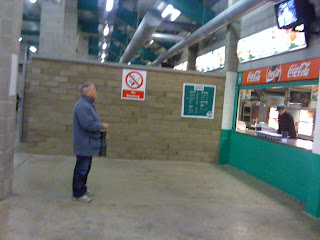 One kid shot dog meal please.
8b. Two signs along from the aforementioned sign was a sign for Leith Funeral Directors, complete with phone number. Surely if I give them a quick bell, told them my seat number and asked them to bring their warmest wooden box I could get out of here before half time? I'm 29 years old, the average life expectancy of a Scottish male, so nothing would have appeared out of the ordinary.

9. The standard of football itself was enough to make any sane indivdual leave, it really was awfully awfully bad. The highlight of the first half being when one of the Saints fans blew up a balloon and then let go of it, sending it zooming around for a bit and in its short life span moving more than St. Johnstone midfielder Jody Morris (yes, that Jody Morris) did in that half.

10. An attempt to secure a minimum wage job in the refreshment hut represented our next attempt at avoiding football hell. We made repeated attempts to persuade a 15 year old that outside a legendary football match was unfolding, in tropical conditions, and that she could have our tickets while we happily served Revels and Bovril to a crowd of frozen and near suicidal football fans. Regrettably she valued her career prospects in refreshment huttery too much and refused. Then refused again. And again. Before once more refusing. 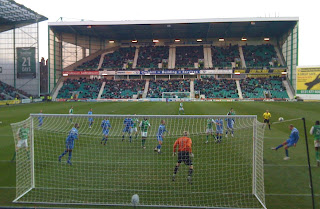 Token match shot.
11. Half way through the second half a dawning realisation hit the three of us that the cold had meant we had undergone a process of self inflicted gender re-assignment and we were all now technically women. To a man our balls had headed north is an urgent quest for warmth and weren't coming back until they'd noted a dramatic increase in temperature in the pants area and as women don't like football we were surely free mumble something about the cold, going shopping and flouncing out?

We didn't. We stuck it out to the bitter end and agreed never to speak of this match again.

Ill leave it to my non football loving friend to provide the post match analysis; "The blue ones were slightly less bad than green ones".
Posted by Kenny Legg at 16:45