Weymouth 3-0 Chesham United
Saturday 23rd April 2011
Zamaretto Premier League
Bob Lucas Stadium, Weymouth
Attendance: 643
My, sort of, pre match preview.
Last weeks match against Hednesford was a match decided by two keepers; there's was amazing, ours not so. So when the I found myself answering a confused James Nortei's question of; "is this the train to Weymouth?" at Bristol Temple Meads early on Saturday morning the opportunity to send him to platform 7 and get on the 9:52 to Llanelli did cross my mind. I'm glad I didn't. 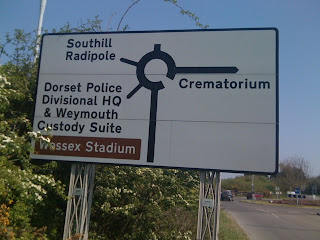 George. This is your Sat Nav. Please leave the Wessex Stadium and take either of the two marked exits. The road to Southill and Radipole is closed to you.
Saturday was the last home game of the season, who knows, maybe the last ever game at the Bob Lucas Stadium.

As with every last home game of the season that means Player of the Year awards! Previously, when we were a proper club, this meant a fifteen minute (sort of) professionally done pre kick off ceremony in which Alex Browne would win everything. Player of the Year, Players Player of The Year, Away Player of the Year, Top Goalscorer and, bizarrely one year, also Fan of the Year. Anther end of season highlight for me being the year plastic footballs were kicked into the crowd, and to this day I still sometimes sleep next to my football signed by such Weymouth greats as Steve Clifford, Jorge Diaz and eh...Will Flint.
This year, the solitary trophy for Player of the Year is announced over the tannoy and Warren Byerley was presented with the trophy. In my opinion thoroughly deserved, he's now scored 20 goals and contributes greatly to the team by his love of chasing a lost cause. Byerley is such a fan of lost causes that he was last seen campaigning for the Colonel Gaddafi to be re-elected and mounting a one man crusade for Weymouth's traffic system to be made a little more complex.
Another pre match announcement stated that the fans group, Wessex Fantasy Football, had managed to raise over £10,000 to contribute towards the players wages this season. A massive doff of the AiT cap to all involved in that scheme.
Our 'Advisor', and in no way connected to the club, George Rolls was in attendance and wandering round like his wife sort of, kind of owns the place. How about George if you are going to play the big football man and be the (fat) face of the club and get to meet all the nice Chesham people and sort of, kind of, represent my club how about you tuck your shirt in your pie filled trousers and whack a tie on you scruffy oik? 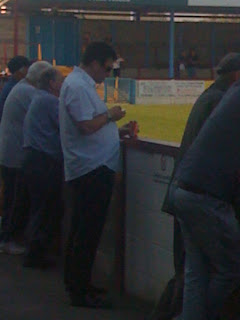 George, I hope you are not drinking Coke again, you know I told you to only drink Diet Coke. Have u seen the last tub of cheese & pineapple? Did u eat them all u fat git. LOL. Amanda, x
In the blazing sunshine the match started well for Weymouth, however Chesham had the first real chances and some great saves by, young person's railcard holder, Nortei kept us in this must win game. As is expected from him now he doesn't prefer to make the orthodox save and after 27 minutes decided the best way to clear a Chesham attack was to punch the ball on to the advancing strikers bonce, safe in the knowledge it will ping off the top of the bar and to safety. Nervy. 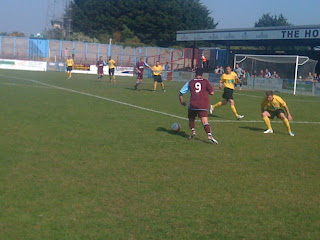 Token match shot.
After 41 minutes Jamie Beesley picked up the ball and set off on another of his scuttling runs down the wing, he scuttled past the defender, cut inside the box and shot a fairly comfortable shot into the keeper arms. But no. The keeper fumbled it and with the ball, probably, over the line, pushed it out into the path of Jamie Mudge who knocked it in!! Nortei 1-0 Dodgy Keeper.

After 46 minutes Jamie Mudge picked up the ball and set off on a run down the wing, he passed the defender and lobbed a fairly comfortable shot into the keeper arms. But no. The keeper fumbled it and with the ball, probably, over the line, pushed it out into the path of Warren Byerley who knocked it in!! Nortei 2-0 Dodgy Keeper. 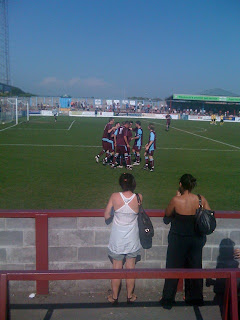 Top: Celebrating Weymouth players
Bottom: Fillies.
After this the sun put his hat on, I set about my beer on the sun drenched terraces and watched a fairly comfortable second half. Nortei made a few more great saves and redeemed himself for last weeks horror show. A 3rd goal shortly before the end, by ex Terras nemesis Matt Groves, meant this represented one of the most memorable end of season games since I got Will Flint's autograph. We left the ground to the sound of the Chesham players getting an on pitch bollocking, mixed with 'Happy Birthday' being sung to Warren Byerley, who was probably then off home to spend the night trying furiously to blow out self reigniting birthday cake candles. 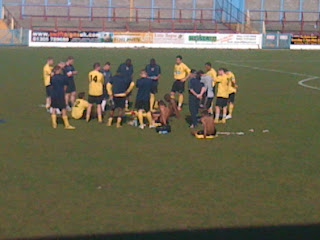 Straight out of the 'How to be a great manager handbook', by Phil Brown.
This was a fantastic performance by everyone, even more so considering they probably hadn't been paid. If any players read this then thank you for playing yesterday and for playing with commitment, professionalism and pride that's long been lacking from our off field activities.
Tomorrow is now a massive game, away to Champions Truro, where a win will guarantee that we stay up. I won't get carried away and say Zamaretto Premier football as who knows what Rolls has in mind for us.
Posted by Kenny Legg at 09:30