A romp in the sun.

My, sort of, match preview.

Tiverton Town is a perfect example of a non league cliche, that of a 'well run friendly family club'. Large parts of this can be credited to Martyn Rogers. Rogers was manager at Tiverton for 19 years from 1992, in which time Weymouth had over 20 managers, and led Tivvy to back to back victories in the FA Vase in 1998 and 99. Rogers is now manager of Weymouth and returned to Ladysmead for this *cliche alert* relegation 6 pointer. 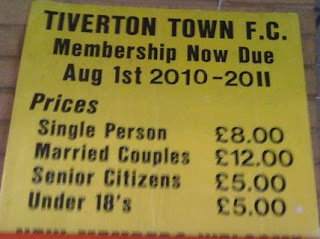 Worth getting married to save £4 on membership surely Shirley?
The strong side that Rogers put out was a relief to Weymouth fans, as a previous statement on the clubs website from someone, who may or may not be George Rolls, said that Rogers would have to release players. Read more about it, and other hairbrain schemes in my exclusive pre match preview. After sneaking a look at the team sheet it appeared the only player who left is Stephen Reed, who has now officially left Weymouth more times than the Condor Ferry.

The Rolls family obviously decided to miss the game and crack on with preparing the buffet for next weeks fans forum, those bread sticks aren't going to arrange themselves. Acting Chairman Pranas Preidzuis wasn't there either, he was probably busy trying to shift a lock up full of solar panels after a deal to install them at Dorchesters ground, as part payment for a ground share, fell through this week. No really, I'm not making this up. Rumours that they weren't solar panels are were actually milk bottle tops stitched together with string are entirely non existent and made up by me.

Tiverton have been bestowed 'well run friendly family club' status for a number of reasons. All clubs should follow Tivvy's example and the Club Shop should double as a tuck shop, with an impressive array of sherbet based sweets on offer. The bar is stocked with a range of videos are for sale, if you are in the Tiverton area and need a Jethro video, or are missing Police Camera Action 4 on video then do call into Ladysmead. Videos are 50p each or a bargain 3 for a £1. 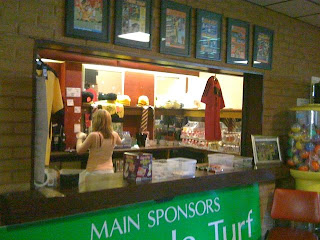 Ill take a pin badge and a 100g of fizzy cola bottles please. 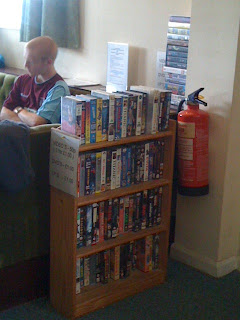 Move over Blockbuster
One more reason? Go on then. When you're old and your grandkids ask you where you watched the wedding of King William and Kate Middleton imagine how good it would be to tell them you watched it in the palatial surroundings of Tiverton Town Football Club and then went home and watched Danny Baker's Own Goals & Gaffs 2 on video. Well wonder no more, because this scene can be created thanks to the good folk at Ladysmead.

The Tiverton fans I spoke to were bigging this match up as their biggest match since a play off against Dorchester in 2004 to decide who would join Conference South, and the club website had this down as a double negative busting "occasion that non-league aficionados shouldn’t not miss." For Weymouth fans it didn't seem to have that sort of intensity, yes it was important but there is a bigger fight for the clubs future going on. 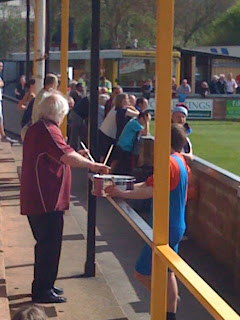 He bangs the drums. The man bashing out a funky disco beat is still playing football at 75.
The 90 minutes of football offered a fantastic respite from talk of solar panels, cheese and pineapples and any matter of important off the field shenanigans and Weymouth managed to cruise to a 4-0 victory over a poor Tiverton side, on a pitch that was drier than a Ryvita in a drought. With goals before half time from Rob Wooleaston and Mike Fowler this nightmare of a season produced a dreamlike performance for 90 minutes. Central to this was the play of Captain Fowler, who impressively broke up the Tiverton attacks, and the wing play of Lee Smith and Jamie Beasley who stretched the Tivvy defence. 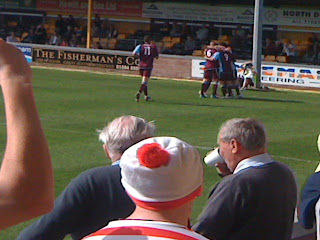 Amidst the celebrations of Weymouths 2nd goal Wally chooses his moment to appear, while a man doesn't let the goal spoil his enjoyment of a decent brew.
Tiverton offered little in return and with little going on in the early part of the 2nd half my mind started to wander and take in the seemingly endless range of advertising boards here, which adds to my hypothesis that this is a 'well run club'. You know you're deep in Devon when there are two adverts for tractor spare companies. Other fine examples of products you wouldn't see advertised in "proper" football included; aggregate, home grown fruit and veg, a vets, pressure washers and fly fishing tackle.

Back in real life Fowler headed in a third on 74 minutes , rom a corner superbly won by Warren Byerley who chased down a lost cause and forced two Tivvy players into defending that Denzel Penberthy would have been ashamed of. 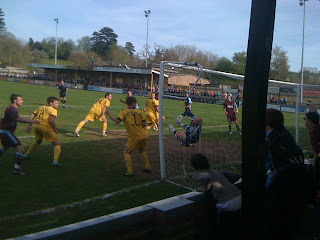 This isn't a token match shot. This a proper match action shot. Click it, enlarge it, enjoy it, indulge me.
This goal led to a conga breaking out amongst the younger element of the Weymouth support, who decided to make this fancy dress day and who are, to a man (boy), battered on illicitly purchased fizzy pop. Harry Potter, Scott from Thunderbirds, a cheerleader, a roman centurion, a nurse and assorted others were halfway round their second lap of the terraces when Ben Geering scored and made this officially a 'romp'. I grant them a doth of the AiT cap for their chant that includes the line "Rolls Rolls wherever you may be you're quite fat and your hair's greasy". Consider yourself told George (you fat greasy div) and go easy on those mini pork pies next Saturday hey. 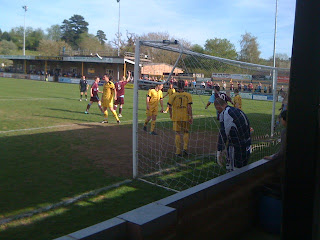 0-4! Romp.
With the sun beating down, a party atmosphere in the stands and an easy victory on the pitch my mind drifted off to Bishops Stortford, where we clinched the Blue Square South Championship in 2006. We're geographically, and as a club, a long way from Bishops Stortford and need to win three tough games in the next two weeks in the hope of winning the battle to stay in this league, with today's victory being, hopefully, a massive step in winning that battle. However, the war to make our club a 'well run friendly family club' is the one that will decide the clubs future.
Posted by Kenny Legg at 17:33