....and the 2011 AiT Poll Winners Party award for 'Least Imaginative Club Nickname' goes to......Longwell Green Sports for their nicknames of; 'The Green' or 'The Sports'. Jeez.

So that's Longwell Green Sports, who play at the Longwell Green Community Centre and are nicknamed 'The Green'; anyone want to take a guess at their club colours?
WRONG

It's blue and white stripes. Obviously. 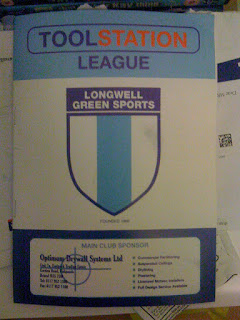 The nominations for the 'Least Imaginative Club Badge' are in and I can reveal the winner of the award are......with their second award today.....Longwell Green Sports.
They may be unimaginative but they're a friendly and welcoming club. We're warmly greeted at the gate by the Chairman, who takes great delight in seeing two new faces and provides some exclusive team news. The Green have three players out as they are on a stag do in Las Vegas (flip me! Las Vegas. What's wrong with a night out in Bristol and a kebab on the way home these days?? Las Vegas eh? *shakes head*) and one of the midfielders had phoned in at midday with a mysterious, possible beverage related, ailment that left him marooned on the sofa. 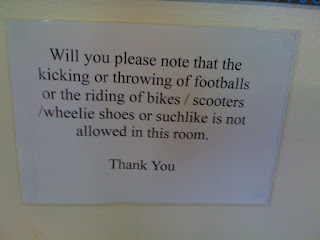 If you tolerate this then your children will be next.
Although not everything at Longwell Green Sports is squeaky clean, there's a recent scandal which has engulfed a member of team and is detailed at length in the Chairman's programme notes. "We have had a letter of complaint in this week....with a £50.00 bill for clearing up a port a loo that some how fell over with some one still in side, a club investigation is on going into a matter that is going to kick a bit of a stink in local footballing circles." Arf! 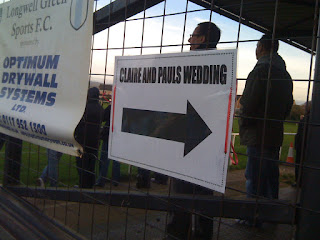 Hermann loves Pauline.
The small community centre, which has recently hosted such events as Claire and Paul's wedding (a doff of the extravagant wedding hat from all here at AiT) and a visit from Paul Weller, is packed, with the only seat available the one underneath the piano in the corner of the room. The trestle table creaks under the weight of the extra, AiT favourite, of chairman's wife made filled bread rolls, the pie oven is full to bursting and the bar tills ringing constantly thanks to a bumper trade of lager and blue WKD (uggh!) being sold to the large crowd of thirsty Welshmen. 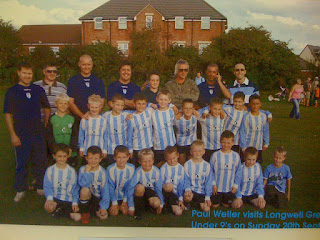 That's your actual Paul Weller there.
The Merthyr fans make up about 75% of the crowd and set up a couple of flags on the fence behind the goal, obscuring the views of those too tight to pay the £6 to come in and the team immediately take control while the fans make themselves known to the officials. The linesman gets some friendly advice of when to put his offside flag up and the referee is given some moral support through encouraging shouts like "rubbish referee". 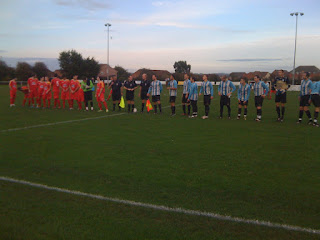 The first half ends with the Merthyr fans explaining the foul throw rules to one linesman, who helpfully takes the time to correct them and provide a full demonstration of Law 15 of Fifa's Laws of the Game 2011/12 and demonstrate exactly what constitutes a foul throw. After a period of time that doesn't exceed fifteen minutes, as specified in Law 7b, the second half commences with Merthyr kicking towards their massed ranks of flag bearing vociferous fans and Longwell Green attacking an end where a spaniel chases a tennis ball. 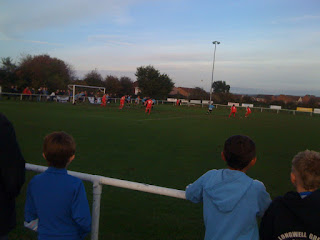 Local boy in the photograph.
The Merthyr fans continue to deploy the international language of screaming to register their disapproval with the referee's performance. There's a shout of "you're killing the game ref" shortly followed by possibly my favourite ever shout of "the game's too big for you." Tremendous. That's a game in the 9th level of football that's been judged as being too big for the ref. If he was to go much lower he'd be sat at home weeping while struggling to maintain order in an unruly game of Super Cup football.

The barracking seems to work. The referee crumbles and gives a soft penalty when a Longwell Green player jumps vaguely near a Merthyr player, making this the most shocking decision involving the Welsh since the NME said that Terris were "the best new band in the UK."

Shortly afterwards the ref falls flat on his face. We all laugh. 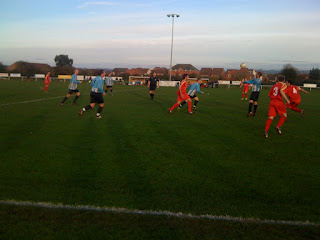 Token match shot.
After that the ref seems keen to even things up and one linesmen decides he's not taking anymore nonsense. He responds to accusations that he lives nearby by providing a detailed family history, centring around his great Uncle Cyril Morris, and then barracks a Longwell Green defender for delaying a throw in. The defenders protestations that he's "knackered" are met with a retort of "play at the next level down if you're tired" I guffawed a LOL.

The ref succeeds in evening things up with five minutes left leaving Merthyr equally cursed and blessed. Their captain, Steve Williams, is sent off for a bad challenge and then Longwell Green's defender, Dan Bryant, is sent off after the ensuing handbags and the gladrags. From the resulting free kick Norris side foots The Sports' first shot of the half into the net to give them an unlikely lead. 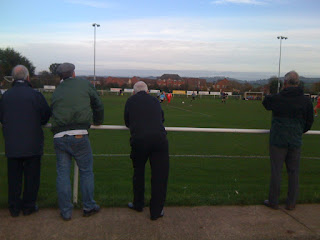 Generation Terrorists.
From then on Longwell are put under sustained pressure, the keeper comes up for corners and the cross bar is thumped, leaving it shaking like a portaloo in the middle of a roisterous night out with the Green boys. But it's too no avail.

Merthyr fans line the route to the changing rooms and the ref no doubt expects some abuse. He's met with handshakes from The Green manager and chairman and the Merthyr fans are respectful in defeat, acknowledging not every game can be won. With a noisy fan base of this size it won't be long before they shouting about their promotion back up the leagues. Meanwhile The Green have bigger things to focus on, like just what did happen to that portaloo.