Our Love To Admira.

There's much to admire about Admira. I basis this hyperbole on a number of factors. 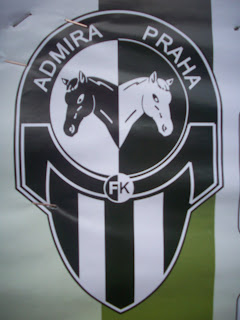 1. A club badge consisting of a pair of suspicious inter-racial siamese twin horses.
2. The photos adorning the walls of the bar show a recent complete disregard for the bog standrard team photo. Thanks to the gift of Photoshop the clubhouse walls no longer have to show shots like the famous 1965 man boob eleven. 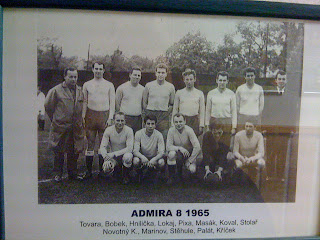 The famous 1965 man boob eleven. Click to enlarge man boobs - there's not yours tubby.
Now Admira can stand proud their team photo in front of a fervent crowd or in front of their new stadium, which looks more than suspiciously like Stamford Bridge with the letters in the stand seats altered to spell Admira! 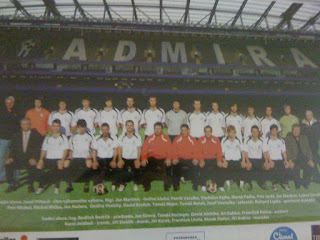 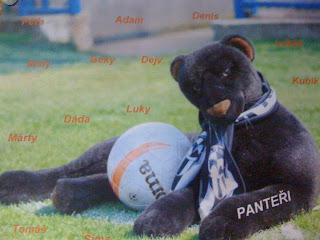 Is this a little bit weird, or is it just me?

3. The ground is a superb mix of different areas. It's more of a suburban park than a football ground.

a) THERE IS A KIDS PLAY AREA IN THE GROUND.
In years to come people will stop me and ask me about my presence at the Stadion v Kobylisích , home of Admira Prague for the 10-15 kick off against FK Pencin Turnov and say, “Kenny, did the presence of a kids playground in the ground influence your decision to attend? I will answer truthfully and say that “in a roundabout way it did swing it for me, yes.” *groans* 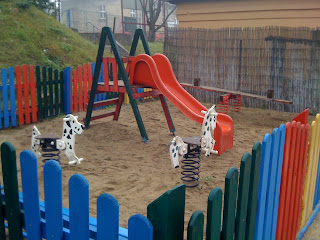 Anyone over the age of six is barred from the kids play area. However here at AiT we giggle childishly in the face of authority and stick our tongues out at the muž and his rules; of course I went on the slide and of course I had a go on the springy wobbly Zebedde thing. I'd be letting myself, and more importantly you, down if I didn't. 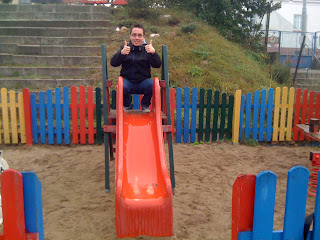 b) There are three (three) places to buy beer. Yes, it is 10:15 in the morning, but I'm on holiday so it's alright and it's good to have options. 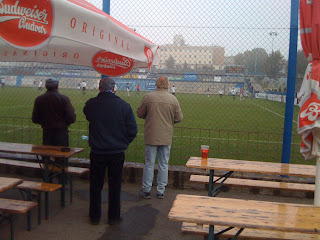 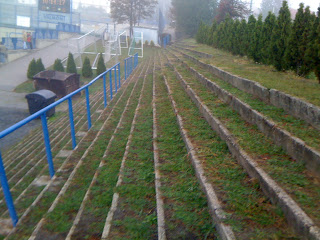 d) Weeds line the the steep, and staggeringly narrow, grassy terraces that mean anyone with a shoe size bigger than a 10 (Eur 44(forty four) should exercise extreme caution when spectating here. Clowns with large shoes on should seek an alternative viewing spot. 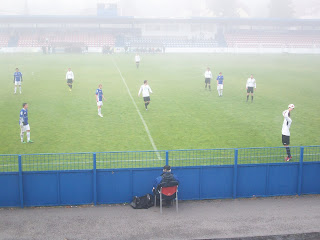 e) At Admira you can sit/stand wherever you like. One lone fan seeks an alternative, flat, viewpoint and sits on his chair, dragged from the decking, and sits down in the ideal place; right on the half way line....and right in front of a blue fence post. 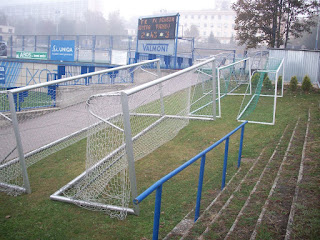 f) Admira offer a retirement home for unlove goal posts. You can sponsor any of the goals in this gallery. When you sponsor a goal your donations are used to help all the goals in our care. With your help Admira can re-pitch all these goals. 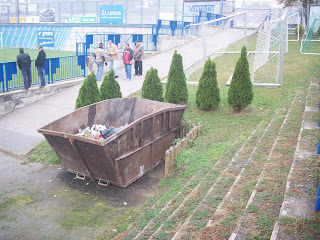 g ) The asthetic appeal of even the most ugly aspects of a football ground are considered. A skip is beautifully showcased with it's own fence and seven mini trees landscaping it to create a beautiful scene that no football ground should be without.

4. Their fans, including the obligatory one in huge amounts of khaki and shorts despite the freezing weather, are to be admired for being up and on the sauce this early. Further praise is due for their use of the very self aware “Old Boyz” banner and the use of a drum and old school rattle to kick up a bit of a racket; probably not enough to rouse the sleepy residents of the three fog enveloped tower blocks looming over the stand opposite but impressive at this time of the morning. 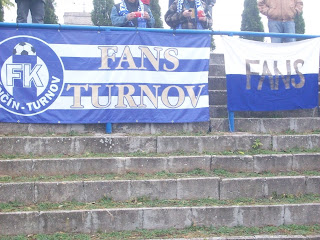 They are joined on the steep terraces by the ultras from Turnov, who have arrived complete with their two banners – one quite clearly a blue sheet and a white sheet stitched together and the word 'Fans' felt tipped across the middle. The Admira fans were welcoming to their guests and the club website reports that “both groups showed how to cheer for - well, no insults and provocations. And after the game to fans of both clubs unison promised - in the spring and again in Turnov!” You get the idea, the Admira fans were welcoming. 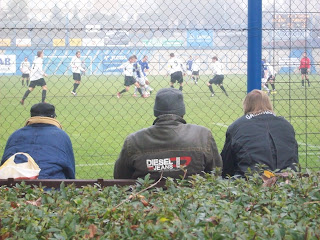 The game swings back and forth, like a swing and both sides have their ups and downs, like a see-saw. After 16 minutes Turnov take the lead, only for Admira to equalise straight away. However by 41 minutes, and with the fog relenting to reveal three more tower blocks (10 Eastern European Football i-SPY points) peering over the main stand Admira had just conceded a third, which left three of their defenders slumped and defeated in their six yard box. Again though Admira came back immediately and had reduced the deficit again before half time, thanks for a goal that looped in directly from a corner.

Half time sees time for some more fawning over the club. 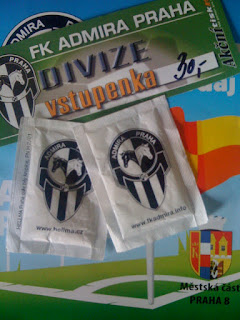 5. You've got to love a club that's got it's own club crest on sugar sachets. Well, they're probably out of sachets by the team the EFW lot had purlioned a load as souvenirs. 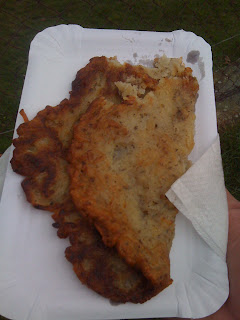 6. They serve food that isn't sausage! Imagine that. After 4 days surviving on bread, sausage and mustard I was delighted to eat this. Whatever it is, there were unconfirmed reports that it contained potato, it was greasier than the sausage that caused a greasy bail out at Polonia Warsaw.

7. Great choice of music. Admira's equaliser, in the forty sixth minute, resulted in The Outhere Brothers – Don't Stop (Wiggle Wiggle) to be played on the PA. 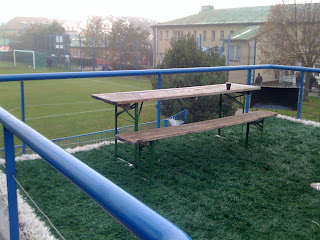 h) A VIP section that consisted of a wooden bench on some fake grass stuff atop a small concrete building. All with a cracking view of the match, but sadly lacking a roof and prawn sandiwches; at Admira even the VIP's aren't that important. 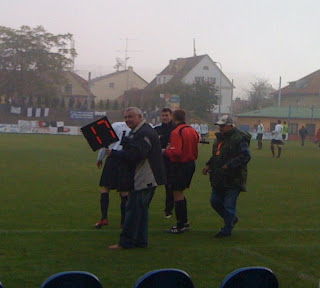 "Hey Petra! Petra!! Look at me, I'm making a substitution!" 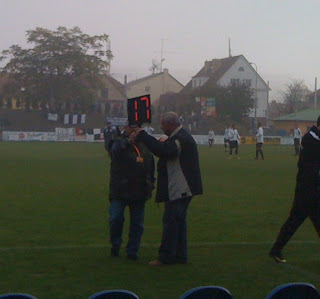 "Give me that Ivan you buffoon, I've told you before not to touch the substitute board. Stop showing off to Petra. Why are you on the touchline anyway? Be gone!" 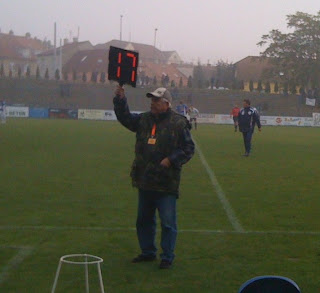 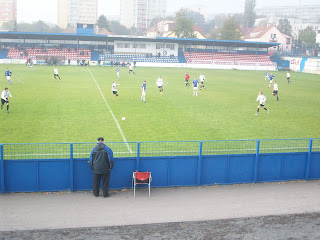 After 74 minutes Admira put together a slick move that ends with striker Mičko nodding it in off the cross bar. It caused such excitement even the old boy left his fence post and stood up. Admira admirably held out, despite Turnov being reduced to ten men – it's a well known football fact it's harder to play against ten men - and at the the team swapped high five's with the Admira 'Old Boyz' and about 10 EFWers, including me, desperate to slap the hands of our new Czech 4th division football heroes.
Posted by Kenny Legg at 20:40