Merthyr, lovely Merthyr you are a lovely machine and anyone who watches you will know just what I mean.

Merthyr Town FC are one of a handful of clubs that have actually been formed twice, first in 1909 and again in 2010, when Merthyr Tydfil FC, were liquidated. Today was to be the day that the club, pretty much, made it first steps back towards Southern League football.

With this potentially being a championship decider the Welsh invasion has began early on and the club house was packed with butt's and boyo's causing unprecedented scenes in the clubhouse of Hengrove's sleepy ground. Extra, Chairman's wife made, cheese and onion bread rolls were called for early doors and the beers were flowing, leaving the Hengrove chairman rubbing his hands in delight at the away teams fans arrving on a mode of transport bigger than a tandem. 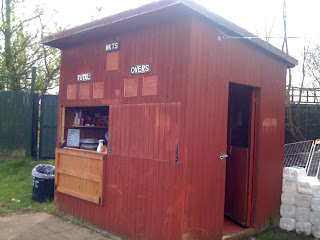 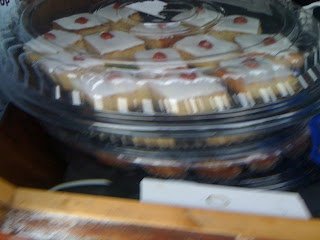 Keep sticky buns out of football.
The Hengrove Chairman seems to be having a tough time at the moment, the club are in mid table of the league and have just appointed Julian Dicks' brother, Grantley Dicks, at assistant manager. Despite having one of the least tough names available in the book of '101 Well 'Ard Boys' names (just joking Grantley!) he has a reputation has a bit of a hard case/nut job. Quotes in the local rag on Friday from the Hengrove manager suggest he might already be regretting getting Dicks in, “I have to sometimes calm him down as much as I do my own players, but that's him”, although he has apparently “made a big difference around the place.” It seems a big difference is needed, if General Manager Nigel Grey's angry programme notes are anything to go by' “The recent Fancy Dress Party was not supported by any players from either the reserves or 3rd teams...this will be dealt with in future weeks”, typed Nigel, whilst dressed as depressed clown, while Grantley stood behind him, smacking his fist into his palm and dressed as a cheerleader bellowing "you tell 'em boss".

The Merthyr team emerged from the changing rooms and were immediately swarmed upon by a group of Merthyr fans and greeted like personal friends, they probably are. The club have managed to maintain a nucleus of the squad from the Southern League and, to a man, they are given a pep talk by their fans, including one bit of sterling fan to player advice, “no foul and abusive language today you little twat”. Brilliant. 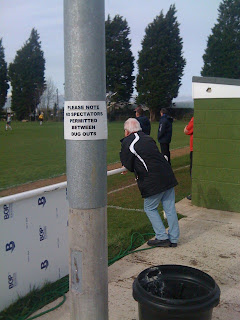 There was probably around 100 Merthyr fans at the game yesterday and they had plenty to shout about from kick off as there class showed against a pretty poor Hengrove side. Not that I had much idea what they were actually shouting though, something about daffodils or coal mines or something. The fans, including the oldest person to ever sport a Stone Island jacket, were able to cheer the first goal after 15 minutes with Ryan Prosser heading them into the lead. This leads to the first chant I've ever heard in this tinpot level and makes for a fairly relaxed match for 'The Martyrs'. 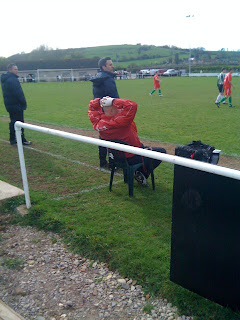 As I said, this was a fairly easy game for Merthyr.
Their play was way above that of Hengrove, the movement of the forward players superb and the diminutive Kris Leek (of course Leek!!) pulling the strings in midfield. That's not to say they haven't embraced this level of football entirely though. They have implemented the non league staple of having a massive guy at centre defence, and when I say massive I mean lardy. Always a pleasure to see a fat lad having a go at playing football, always makes me think it's not too late for me and that I can have a pasty and a pint at half time without harming my career prospects.

The second half was pretty easy for Merthyr, they played some great football, made some great runs and for most of the match Hengrove couldn't get close. This didn't stop the Merthyr fans from dishing out some fierce abuse to the referee though. Most of them wore the angry faces of men who had been spent 50 years berating a referee and weren't going to let the sedate setting of Toolstation Division One calm that inner rage now. Also, one of them was smoking a pipe. Things like this are always worth mentioning and, like graffiti of cocks, will always have a place of AiT.

The Hengrove physio was on the receiving end of some cheeky banter from some of the Merthyr fans and responded using the only defence an English man has in armour from a Welsh verbal attack, by making the noise of a sheep. AiT is an equal opportunities blog and does not condone this ba ba bahaviour. 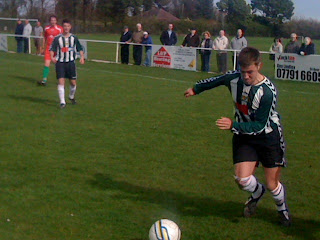 Token match shot.
Prosser got his second after some nice approach play on 70 minutes and got his third from the penalty spot on 80 minutes. The victory was not quite enough for Merthyr to be crowned Champions just yet as challengers Bridport and Oldland Abbotonians both won. However for Merthyr to lose the title they'd have to lose their remaining six games and somehow lose a goal difference of 40 goals in the process. Congratulations to Merthyr Town.
Posted by Kenny Legg at 11:13