Goytre United are the team everyone aspires to be. They combine skillful players with investment in their facilities. Not my words Carol, the words of the Barry & District News.

It seems odd that everyone would aspire to be a football team from a tiny welsh village, a village so small that if you lay it's minimalistic Wikipedia entry from end to end it would cover the main street of the town. T'internet research reveals the undoubted qualities of the ground, it includes a horse riding school (of course a horse riding school!) and backs onto the River Ffrwdwyllt, a river that floods annually and washes away all the vowels in it's path.

Cwmbran is where Jammy Dodger's and Wagon Wheels are made. Amazing. 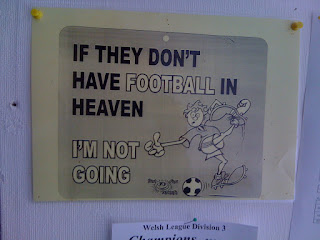 The ground, Celtic Park, is tiny and like it's Scottish namesake won't be hosting European football this season. There is one building that houses the changing rooms, pictures of teams gone by posing outside a terraced house (eh?) and a refreshments kiosk, advertised in the programme thusly; "Rosie invites you to sample her wares at the hatch....a visit to Celtic Park would not be complete without tasting one of her famous baps." I had a nibble on one of her baps, bit too soft for my liking. Maytrrrrron. 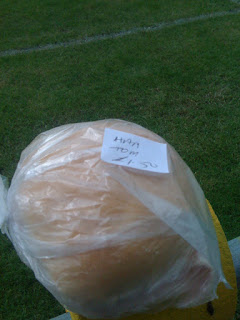 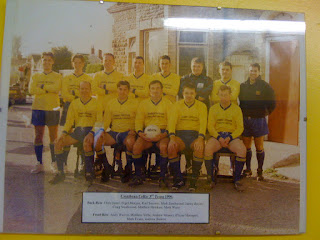 Team photo outside a terraced house. Obviously. I'm sure there is a perfectly legitimate reason for this.

The Celtic warm up commences with a fantastically innovative keepy-uppy routine, with the person responsible for letting the ball drop being forced to crawl through a huddle of players, whilst doing an impression of an animal. The routine was sadly curtailed by more traditional warm up routines and the team didn't get chance impersonate enough animals to fill Noah's Arc and had to settle for a small dinghy setting sail with a dog, a cat, a cow, a pig and a chicken. 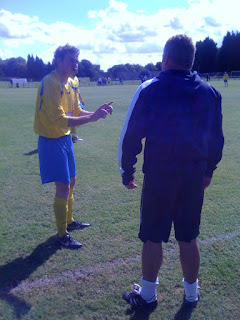 Do you know who I am son? 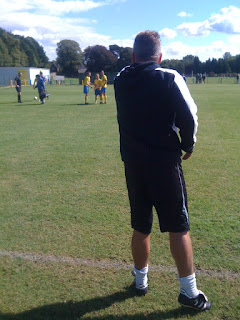 I'd pay £4 just to say I'd been in the same football ground as ANDY DIBBLE'S DAD, sadly not everyone has the same thought. About ten people watched the match through a fence behind one of the goals. When it was dry they stood atop a mud bank and when it rained they retreated into their cars and watched the match from there, while performing a ridiculous synchronised windscreen wiper routine. Tight bugers! I hope their windscreen wipers emit a high pitched squeak.

The first half is crap, so two early goals for Celtic early in the second half are as unexpected as Gary Crosby appearing behind you when keeping goal for Man City. They were two really well worked goals, the first coming after some great wing play and a header from Celtic's striker “Ginge”. Both strikes sent ANDY DIBBLE'S DAD into a state of untold delirium and some Celtic players into an half baked 'Inbetweeners' movie dance routine celebration. This is then followed by a nervous few minutes as Goytre pile the pressure on and ANDY DIBBLE'S DAD is forced to chant the phrase “see this spell out”, like an agitated Grotbags trying to reverse a particularly vengeful hex. 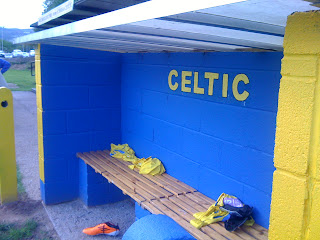 As he patrols the right hand side of the dugout, he's clearly a man in a world of turmoil. To the left hand side of the dugout a much more serene story develops as a small girl counts excitedly to ten in a competitive game of hide and seek. One, Two, Three, Four, Five, JEEEESSSSUUS, FUCKING CHRIST HEY....SHIT, coming ready or not!!! Goytre have scored and a five year girl joyfully bounds off, completely unaware of the barrage of obscenities and blasphemy that just drowned out her countdown. 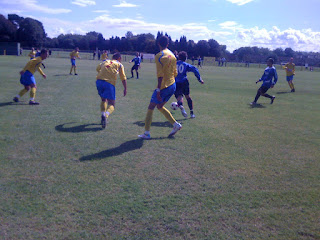 After a solid display and completely baffling the opposition for long period the inevitable happens, the little boy is captured. Oh and Goytre equalise, much to ANDY DIBBLE'S DAD's disgust. The home crowd are also disappointed, the chance for three points is lost, the time for hide and seek is over and only one guy doesn't let the conclusion of the action phase him as he remains casually picking berries from the bushes surrounding the ground.