The differences between Nailsea and Stockwood are vast.

Stockwood: Went through it once, looks bloody rough. Won't be going back. It's Wikipedia page lists it's attractions as three pubs and an "open space", so I'm not in a hurry to pay it a visit. However, one of those pubs is brilliantly called 'The Man In Space'. Pint in Stockwood anyone? 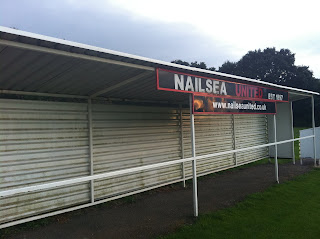 Nailsea's website is a professional affair with plenty of information and a link to the club shop, where you can buy club shirts produced by toffs favourite Canterbury of New Zealand no less. La di da.

Stockwood's however carries a match report from Saturday's match that contains a superb critique of the game including; “without the ball we gave them too much space (although they weren't a good football side)” and “No MOM this week as nobody can count themselves as having the best of games” is a definite winner. Thumbs up.

Nailsea's warm up is well drilled, organised by a coach wearing his club polo shirt; there's bibs, cones and they've got it all. Flip me, they've even got coloured goal nets. COLOURED GOAL NETS. 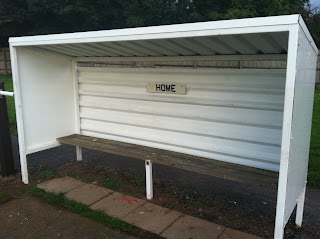 Stockwood pre match warm up is a shambles. The players take it in turns to hoof it across the pitch and failing to complete anymore than three keep ups. Some players turn up slightly before kick off and are no doubt dazzled by the surroundings they now find themselves in. This could have been the biggest culture shock since a young Will Smith gave up his life shooting some b-ball outside of a school in west Philadelphia and arrived in Bel Air in a cab with a licence plate that said FRESH and a dice in the mirror.

The officials go through their warm up, which consists of a gentle jog across the pitch a couple of times before they head off with the ref admitting he's “worn out already” and one linesman, Kev, sweating profusely. Kev seems to have that strange gut shape that suggests a BMI reading of not obese, not fat but of "non league official". He's obviously been running the line for years and a doff of the AiT cap to him. 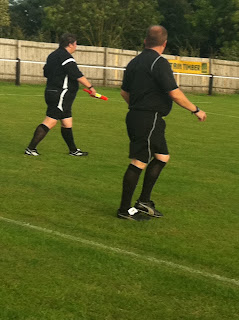 Nailsea head off to their changing room for a final tactical analysis of the opposition and come out shortly after raring to go.

Stockwood's team talk consists of a disinterested circle of men getting shouted out by a man who looks like he's come straight from a cramped office in the back of a builders merchants, where he's spent the day unsuccessfully chasing overdue invoices.

Nailsea kick off on a pitch that contains more lumps than the song 'Lump' by President of the United States of America. 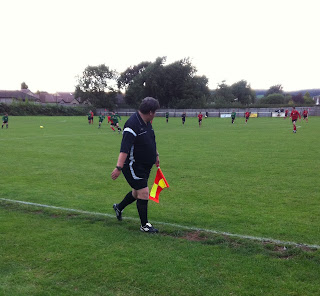 The Nailsea crowd drift slowly in, even their football banter is posh; for example "Oh, they've got a big goalie", in reference to Stockwood's rotund keeper, where a "fuck me, that keeper is a right fat bastard" would have sufficed. Other members of the home support include three people sat out in comfortable camping chairs, an old boy listening to a radio and a three legged dog. 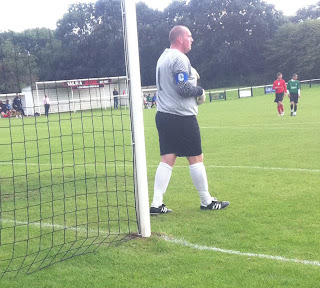 Stockwood have no supporters. They do have a man, dressed in shorts and espadrilles who looks like he'd rather be supping a Staraproman and indulging ladies in "cheeky banter" in the Slug and Lettuce, who has now nudged the builders admin clerk aside and is barking orders from the touchline.

Nailsea knock it round nicely, look solid at the back, a big man with the obligatory surprisingly good touch and a tricky left winger who scores the opener just before half time.

Half time sees Nailsea go into the changing room for a pro zone review of the first half and a revised tactical plan.

Stockwood stay out on the pitch and hoof the ball around a bit more.

My half time routine consists of a tea in a mug, (a mug!) and a look round the bar of the busy sports club. Not for them the usual non league bar decoration of pendants and old team photos, they've gone for the lesser seen skittles alley and numerous leaflets saying the bar will" no longer cash cheques" and advertising a helpline for colitis sufferers. 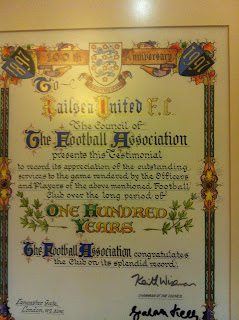 The second half sees Nailsea score two goals in the first five minutes, one an absolute belter from 40 yards.

Stockwood get a bit ragged and have a couple of players booked. The ref belittles one Stockwood player with the line "I bet your school teacher loves you" and another argument with a Stockwood player leads him to remark "My cows and sheep don't answer back." I just pray he's a farmer or that remark is just a little bit weird. This is Somerset though. 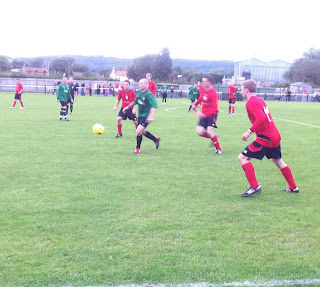 Before the end Nailsea add a couple more, Stockwood have a couple of chances and Kev looks absolutely busted. The game is played in a great competitive spirit and enjoyed by all; rich, poor, fat, thin, 2 legged and 3 legged and officiated by people doing it for the love of the game - just as football should be.


If you've been affected by colitis and wish to talk to someone then please call 0845 130 2233. Your call will remain confidential.
Posted by Kenny Legg at 09:17