Down is the new up.

They're a competitive bunch at Odd Down.

To my left a lone man repeatedly throws arrows at one of the three darts boards and a kid makes arrangements for someone else to do his match report, so he can participate in tonight's pool tournament. On my right three arcade machines flicker manically, behind me a skittles alley, buzzing all round me a women collecting money for the raffle, (The prizes are: one Quality Street, one Roses, four cans of Becks, four John Smiths - I'm presuming this is a roll over) and on the walls around me posters imploring the locals to part with their cash for a fantasy football competition and an upcoming quiz night. 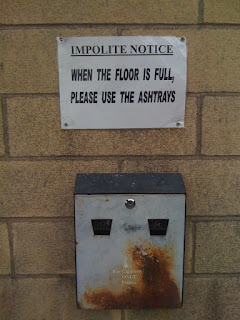 This place is so competitive I was only granted access to the toilet after winning a best of three, which inevitably became a best of five, game of Paper-Scissors-Stone and even in there was a poster for another card game called Click. 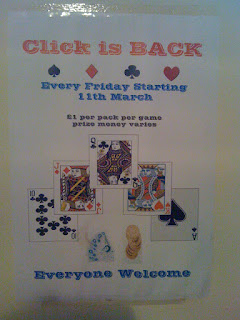 However it was in front of me that the extremely competitive nature of this part of Bath revealed itself. Slowly, and methodically, a man wearing all black (including braces), sunglasses indoors and a moustache, delivered straight from 1983, sets up a poker table. 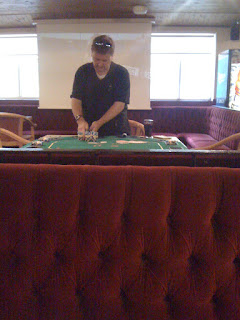 The gambler's face cracks into a grin as he lays down the king of spades.

As the darts team wanders in, the card shark is joined by his companions who are all greeted with a steely stare. I think this place is what is referred to as the “hub of the community”, but after noticing the dodgy Italian football** on the big screen (complete with Paula Radcliffe a like) I'm left wondering if there's is some moonshine being brewed out the back along with a lucrative sideline in killer whale smuggling. 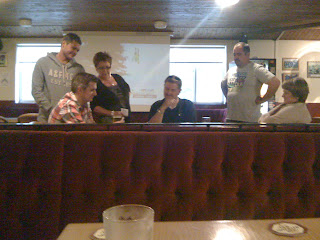 The dealer just stares, there's something wrong here he thinks.

They were so into gambling at this club that even the pitch was a lottery. Rubbish gag – it deserves this. 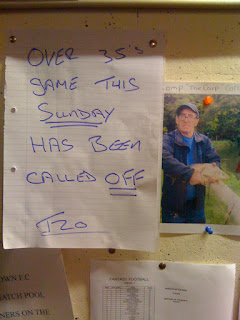 Not every competition goes ahead then. Although, that is a pretty impressive carp that fella is holding. Give him a prize someone!

Tinpot player profiles are always something special. In keeping with the competitive spirit of the place Odd Down's have clearly been written for a bet, on a computer with a bust full stop button. Please observe my personal highlight:

Sorry! A whirlwind hitting a skyscraper?? What? 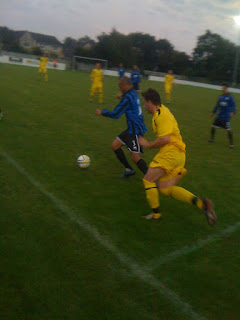 The first half was tentative, both sets of side seemingly waiting for the inevitable "mysterious" floodlight failure. Brislington manager, Jeff Meacham scribbles tactical notes into a notepad, well I presume he does. He could have been doing a word search, or losing a solo game of noughts and crosses. I'm sticking with tactics though, most of them aimed at, and ignored by, his keeper.

Meacham: (To keeper). "Hit the area for Frank! (Points to diminutive winger busy hugging the touchline)
Keeper hoofs the ball straight down the middle of the pitch.

Meacham: (to self, mumbled forlornly) Or kick it straight down the fucking middle then.

Meacham: (To keeper) Try putting it out there. (Points widely to right wing) 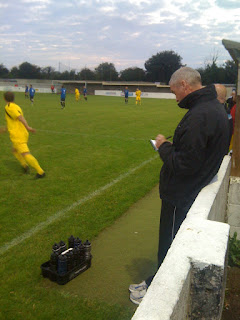 At half time Ray Winstone appears as a floating hologram in the middle of the pitch and barks something about it being "all about the in play.” Back in the bar a bare knuckle boxing bout is taking place, to my right two blood hungry chickens snarl at each other cheered on by a group of sportswear clad males and I'm even challenged to a game of strip poker before I can order my pie and Bovril.

Or, if you prefer the truth, I got a brew in a mug and watched as an argument broke out over timing of the raffle draw!

A group of tinpot enthusiasts were irate after finding out that the winning ticket would only be revealed after the match. “We've got to get the players and the ref” (to buy tickets) are met with pleas of “we've got to be off straight after.” Tough shit lads. Snooze you lose round here. 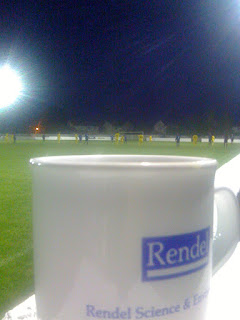 The magic of the cup mug.

Odd Down's competitive spirit is shown in the second half as they grant Brislington a 2-0 lead with about 25 minutes left.

After giving the guests a 2-0 goal head start the The Down's competitive spirit appears and they flood into the opposition half, meaning the Brislington half suddenly contains more Down than a luxury pillow stuffing factory. They score two goals, both from looping headers and Meacham is furious, “ We gotta learn to fucking mark” and the game ends 2-2.

If you said no one win, you the winner!

If you bought raffle tickets and left straight after the final whistle, you the loser!