Magath of the Day

Schalke 04 3-1 Valencia
Wednesday 9th March 2011
Champions League, 1st Knock Out Round
Veltins Arena, Gelsenkirchen
Attendance: 53,517
In an unexpected change to the advertised AiT schedule I will now be blogging on a proper football match. Do not adjust your computer Internet service. This post is brought to you by Continental and Heineken. 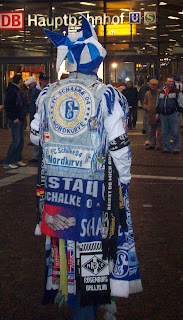 This years Schalke 04 fan collection.
My solitary previous experience of touting was mixed, I'm perhaps the only person in history who has successfully haggled the price of a ticket up when securing a ticket for the Magdeburg - St. Pauli promotion decider in 2007. Today's experience faired somewhat better and after being offered a ticket for 150 Euros and 80 Euros I fell in love with a German man who let me use his season ticket for 40 Euros and gave me his phone number should there be any problems! Scouse touts could learn about customer care from this fella. Not just any old seats, oh no. 10 rows behind one of the goals of the magnificent Veltins Arena. Mysterious German stranger if you ever need help securing entrance to Bristol Manor Farm then I am at your service. 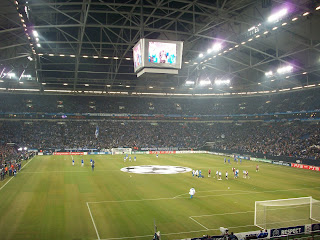 Token stadium shot.
The stadium is immense, a magnificent theatre to watch football and I did a little sex wee in my pants when I first entered block S5 and took in the view. It's possible to wander all the way around the ground and I'm pleased to award the Schalke fans the AiT award for "Highest ratio of denim jackets adorned with patches jackets I've seen at any German ground to date". 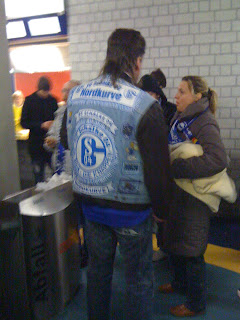 Mullet + Denim Jacket = Hello Mr Stereotypical German football fan.
The Schalke Ultras congregate in the Curva Nord and on each entrance are two kids handing out thousands of bits of paper saying "Manu bleib" ("Manuel stay". A reference to interest from other European clubs in keeper Manuel Neuer) for a choreo display when the teams take the pitch. I tried to sneak a couple of pictures but they nicely asked for them to be deleted. I'm guessing that the Ultras were worried that Helga and Gertrude in the Office Supplies department are keen readers of AiT and would realise why the office had mysteriously used 42 reams of paper, obliterated 19 print cartridges and why the photocopier was constantly smoking. 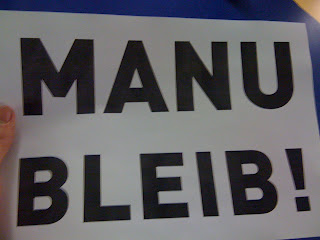 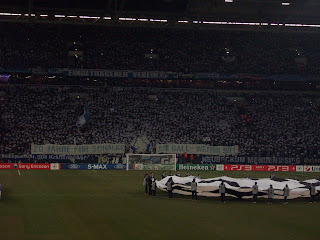 Twenty years on the ball for Schalke - Carry on! (Click to enlarge)
On the day of the match Schalke Manager Felix Magath was the subject of news reports that the Schalke management would replace him at the end of the season. This is as a result of a mixed season where the team have struggled in the Bundesliga, yet have reached the knock out stages of the Champions League and the DFB Cup Final. In order to get the fans on side Magath has his own Facebook page to communicate to fans directly, an idea that backfired at the weekend when some Ultras displayed a banner saying "Felix gefallt uns nicht mehr" ("We dont like Felix any more"). Many fans at tonight's game have also raided the work stationary cupboard in support of Magath, with many around me holding pieces of paper saying "pro Magath" or signs with the Facebook thumbs up sign and the slogan "Magath gefallt mir" ("I like Magath")

It is now only a matter of time before Phil Brown sets up his own Facebook account. 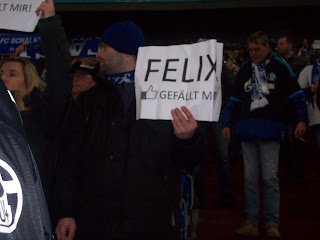 The Valencia fans numbered about 200 and went bonkers barmy when they took the lead after 17 minutes through Ricardo Costa. The goal also blew the cover of another bunch of Spaniards amongst the home support who had clearly purchased the 'Robbie Earle ticket package'.

As with every match "Angry Fan" is in, or for our German readers " Der Angry Fan". Never before have I seen such anger, the man could not sit still, had a voice stuck on the 'bellow' setting and bore more than a passing resemblance to the mugger from Flight of the Conchords. 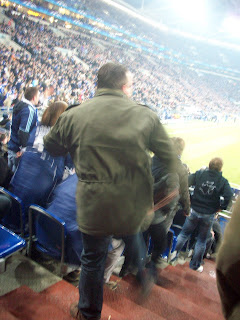 Angry Fan booting an imaginary Hund.
He has plenty to be angry about in the first half as Valencia are on top, but erupts into a Ian Curtis style flailing dance move when Jefferson Farfan beautifully twats the ball in from a free kick just before half time. Even I jumped up, as much as I love Tinpot you just don't see goals like that. Woof!

Angry man, reaches an angry zenith early in the second half when he picks on the most defenceless man in the ground, the spotty young 'un flogging ice creams. The lads got a hard enough job of flogging Magnums on a cold night, to a crowd of hard bastard men bloated on bratwurst and beer without being started on. Angry Man takes umbrage with the yoof getting in his the line of his rageovision for a nanosecond and slaps an ice cream out of the kids hand and then goes to smack him. Ridiculous scenes and I'm sad to report that one White Chocolate Magnum did not survive, due to severe external injuries and internal melting as a result of it's collision with the unforgiving concrete terracing of block S5. 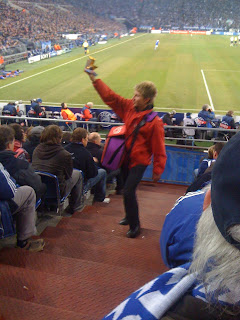 Jürgen in happier times, 3 seconds before he gets a slap.
Angry fan can't even relax when Mario Gavranovic pings one in from 2 yards off both posts to put Schalke 2-1 ahead and can't even sit back and admire the way Raul makes great defence stretching runs and starts to run down the clock to take Schalke through to the Quarter Finals. With Valencia pushing forward Schalke score again with Farfan chipping keeper Guaita and cementing his place as the second best football player called Jefferson in the world, after Jefferson Louis of course. 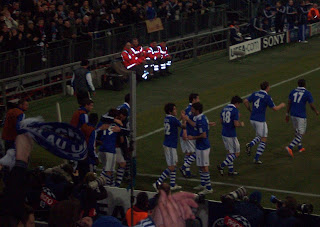 Celebrations after Gavranovic's goal.
On the tram on the way back to the station I notice everyone on board is a grizzled hard working man, living a life where stone washed denim is King and by royal commandment must be adorned by a clothing item in Schalke blue. Scarves that appear to have seen over twenty years of Bundesliga action, faded Schalke jackets with beer stains of goal celebrations past and shirts with long gone sponsors are all on display. The fans here are long suffering dedicated fans of a traditional club playing in a superb modern arena and for that, their reasonable prices and excellent customer service when scalping tickets and the high number of patchwork adorned denim jackets I salute you Schalke 04. 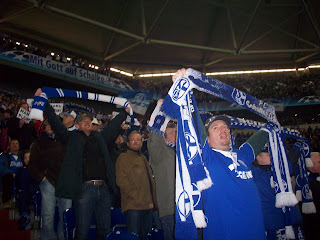