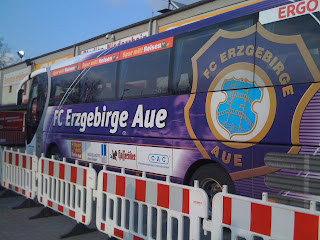 This coach can do up to 70 miles per Aue. PER AUE!!
Oberhausen is a pretty soulless and, frankly, weird town. So weird it decided to twin itself with Middlesbrough. The town centre has been decimated due to Europes largest shopping complex, the CentrO, opening nearby in 1996 and sucking the life out the place. It also appears the local fans here just love to shop, judging by the amount of adverts we're bombarded with.

Thanks to the computer internets Huddo Hudson of Gannin Away I'd been tipped off to try the RWO chilli. Nowhere else would I buy food from a shipping container, but you don't turn down golden advice like that. Sorry Aggbrough soup but shove over there's a new King in town, a new champion of football food. 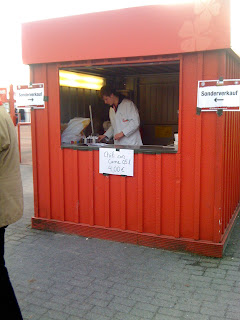 Buy food from a shipping container? No thanks. It's chilli. 1 chilli please my good man.

In the ground, which has 2014's fashion must have, the athletics track, the PA is booming a never ending playlist of awful RWO club songs followed by an assault of cheapskate radio style adverts, followed by metal song, followed by more adverts, followed by the introduction of Erzgebirge Aue team, "brought to you by the Premio Autoservice". A doth of the AiT cap to the 250 Ossis from Aue who've travelled 600km in their trabants to be here for the this TV approved 6pm kick off. For a bit more on Erzgebirge Aue read Dave Tunnicliffe's recent report over at Danny Last's European Football Weekends.

Time for some more metal music and then "an interesting interview". Perhaps an old player, a local celebrity, nope......an excruciatingly long interview (sales pitch) with a sales droid from "Potte Sosse", RWOs "official sauce sponsor". If there is two things I don't know how football survived without it's pointless extra officials and clubs having official sauce sponsors. 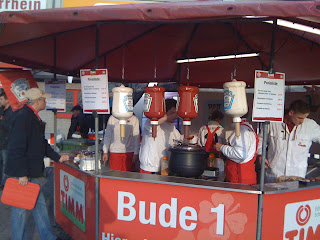 There's time for another advert before were treated to the Baha Men's masterpiece "Who Let The Dogs That?" followed by an announcement stating that "the side gate in this song was subsequently closed and repaired by 'Guido's Doors and Windows of Oberhausen' and the Dogs captured by 'Fritz's Pet Investigators of Essen'."

The arrival of the teams force the adverts to take a break and the RWO mascot, Underdog the ...eh dog, obviously, does his best to rouse the consumers supporters. He waves his hands (paws) in the air, waves to the crowd and high fives (high threes?) the young members of the RWO support perched on the wall below the perimeter fence. However he misjudges his canine strength somewhat and high threes one little girl clean off the fence, sending her sprawling backwards onto the unforgiving concrete terraces below. With a girl laid out on the terraces and on the verge of tears as a result of his actions there's only one thing for Underdog to do....and that probably wasn't moonwalk away from the scene of the crime, whilst waving to the crowd. 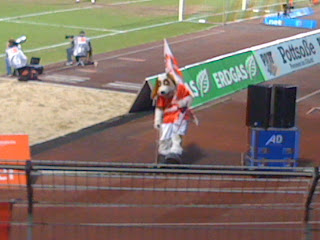 Underdog making his get away from the scene of the crime the only way a dog can....on a kids scooter and using a flag as camouflage.

Both fans chant from their books of "Ubiquitous German Football Chants for Beginners", "Auf gehts Oberhausen schiess ein Tor fuer uns" ("Come on Oberhausen score a goal for us"- Good idea) and Aue respond with "Auswarts seig, Auswarts seig" ("away win") and it's fairly clear early on that this will be the case. It's no surprise when Aue take the lead from a corner, Rene Klingbeil has dick all to do to outwit the static RWO defence and nod it in. The RWO strikers don't fare much better, missing a simple chance to equalise a minute later. Their play deteriorates from here rapidly and they're given a good booing off at half time. (I was saying O-BOO-herhausen) 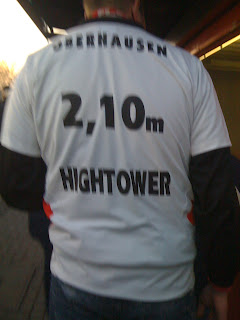 We can see you're ridiculously tall, I'm not sure you need a shirt to advertise this. Now, can you move please I can't see a thing.

Half time leads to more adverts and a couple of subs for RWO, of course the announcement of these is sponsored by a local garage and the attendance announcement is sponsored by an Estate Agent. There were so many adverts I half expected Keith, Ian and Andy to come hurtling round the athletics track in their twatmobile at any moment. 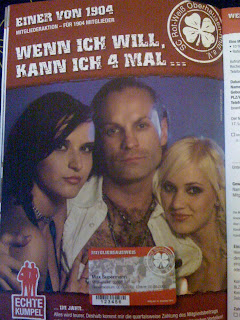 Not all the adverts were annoying. This one has a couple of easy on the eye fillies and a poor gag. Both things being favourites of mine. "If I want to I can do it four times" - Pay for his RWO membership that is. Arf.

The second half is a shocker for RWO. It appears new manager, Theo Schneider, has had the players practicing with beachballs into a strong headwind all week as cross after cross, pass after simple pass are hopelessly overhit. In one particularly bad piece of play they manage to turn an attacking position into a series of overhit backwards passes before the right back slices it wildly into touch. Unbelievable tekkers like this lead to shouts of "wir steigen ab" ("we're going down)" and "Dritte Liga wir kommen" ("here we come 3rd division") and some sublime textbook booing and whistling. This reminds me of Weymouth, it's wonderful. Being surrounded by a crowd of pissed off middle aged men, getting on their own players backs as they get increasingly worse. Magic. Even Underdog pleads to be shot. 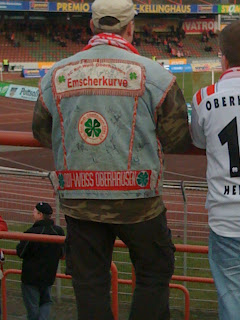 Spare us die Kutte. Poor effort. A Kutte with only 3 patches would see you laughed out of Schalke.

Want another link to Weymouth? Of course you do. Paul The Octopus was born in Weymouth, making him the towns most successful football export ever, and made his thrilling predictions from a Sealife Centre in Oberhausen.

Aue double their lead from another corner, this time from Enrico Kern, although there's no shame in conceding a goal from an Aue corner as 13 of there 31 goals this season have come from an eckstoss. #actualfootballfact 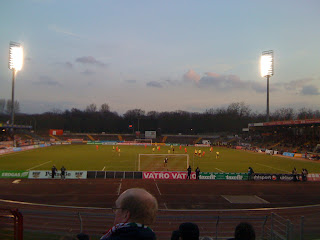 Token match shot. For those watching in black and white Rot Weiss Oberhausen are playing in red and white.

With 15 minutes left RWO are so rank bad that the only option left to the suffering masses is the ironic cheering of each pass. Somehow this rouses RWO and with ten minutes left Tim Kruse scores. The crowd cheer but it's a cheer of embarrassment, they know there's no chance of an equaliser and that the piece of skill leading to the goal was a mere blip. The Ultras give the team a bit of support, sort of. They shower the pitch with their beer mugs without a second thought for getting their 1Euro deposits back. 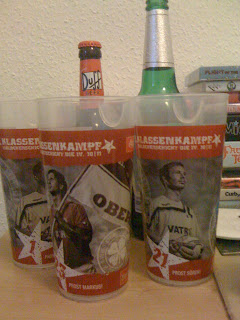 Surely worth 1Euro of anyones money?

RW Oberhausen: If your football team was as good as your commercial department you'd be Champions League, but you're not. Good luck in the 3. Liga.

For some match higlights click your internet mouse here.