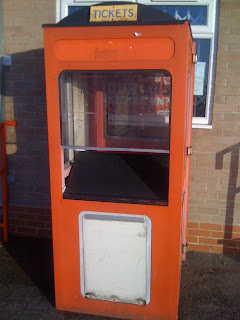 The ticket tardis
This seasons Blue Square North managed to stretch itself as far south as Cheltenham, where itinerants Gloucester City AFC are currently playing their home games. This week the Tigers unveiled plans for a new stadium back in the city, after being forced from their Meadow Park home in July 2007 when devastating flooding left the ground under 8 foot of water. Since then the club have played home games at burger dodgers Forest Green Rovers, Cirencester Town and now at home of big rivals Cheltenham Town, a situation that is “like Manchester United playing at Maine Road or whatever it's called now” according to one City supporter I spoke to. At a time when my team, Weymouth FC, are the subject to talk of a ground share it is heartening to see that City's plans to return home have taken a step forward. Click here to see the local news report on the plans. 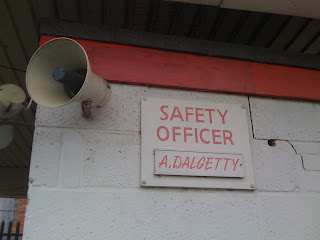 No Dalgetty, no doubt.
City bring back memories of a time when I actually enjoyed watching Weymouth FC, in particular a 5-3 win for in December 1998, and are one of the few traditional non league teams we use to battle with before teams like Swindon Supermarine became adversaries. Over the years a series of players have played for both clubs, players like Paul Adcock. Adcock was a short arse striker who played 91 games for us scoring 19 goals but lives longer in the memory for being spotted wearing a coat covered completely in feathers in a Weymouth nightclub. Another link is ex City player manager Tommy Callahan, a man who was always abused quite spectacularly by Weymouth fans and who I have to thank for me learning a whole heap of new insults and making me the foul mouthed arse I am today.

Whaddon Road, home of Cheltenham FC, is a classic old style football ground as its not far from the heart of the city centre, hemmed in by residential housing and has all the amenities your typical football fan wants nearby, like ehm a Buddhist centre and a Bowling Green. You can also annoyingly adapt Whaddon Road to the theme tune to Byker Grove, as my brain decided to do and leave on repeat for the rest of the day. Whaddon, Whaddon, Whaddon Road ah ha ah ha ah ha. Yeah, thanks brain. I hate you sometimes. 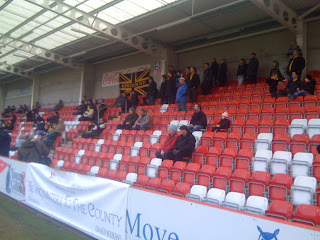 You're going home in a coach organised by your club because you're playing your home games 10 miles away from the city you represent. Don't think that'll catch on.
Inside the ground the supporters of Gloucester are doing a commendable job in keeping the club going and doing their bit to take the club back to the city. Whilst enjoying a beer and a (non league classic) filled bread roll from behind the bar I'm fleeced for cash three times by people selling raffle tickets, football cards and golden goal tickets. Add into this that these fans have travel 20 miles for a home match, to the ground of their rivals, then I certainly doth my cap in your direction City fans. 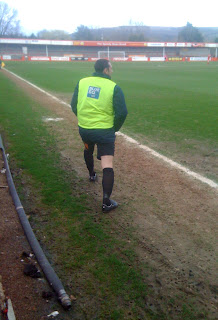 The loneliness of a Blue Square North sub.
Todays visitors are, well both teams actually, however Gloucesters opposition are Eastwood Town from the proper troubleatmill grim north, Nottinghamshire. The club are currently playing at the highest level in their history thanks to financial support from owner, and former pro poker player, Robert Yong, who is also the owner of the largest poker venue in Europe apparently.

Eastwood are nicknamed 'The Badgers', and their club crest seems to be depict some sort of nocturnal sex pestery that would have had Bill Oddie wetting himself with excitement whilst filming it all with his night vision camcorder. The weirdo.

Oddie porn.
Another link to Weymouth FC is the presence in The Tigers backline of Matt Coupe, a man who regularly took great delight in kicking the shit out of Steve Claridge and once kicked Claridge so hard his shirt actually tucked itself into his shorts. It gives me great delight to report he was part of a Gloucester defence that was continually out muscled by the Eastwood attack. That's not to say Gloucester lacked their own muscle, sadly though most of it came in the 'relaxed' variety and was situated around the waist of keeper Kevin Sawyer. Sawyer was at fault for The Badgers first goal when he came out to gather a cross, attempted to get off the with all the grace and poise of an elephant attempting a pole vault, failed and let the Eastwood number 10 head into an empty net. 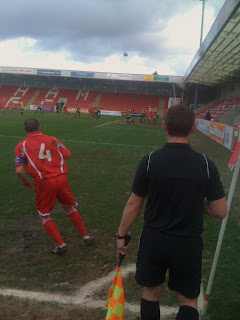 Token match shot.
Gloucester went two down before half time and were finding the Badgers harder to control than a TB outbreak, however they didn't help themselves by turning in one of the most inept displays involving a Tiger since my mate Richard donned the Rory the Tiger outfit at Haven Littlesea Weymouth, whilst under the influence of a few summer beverages, and shambolically attempted to join in a Steps medley in front of a distressed group of holiday makers. 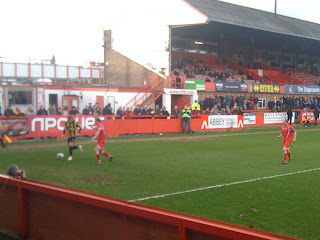 Token match shot (reprise)
Eastwood went 3-0 up mid way through the second half thanks to a O.G when a Gloucester player got in the way of a Badgers sett (Badgers sett!! Yes!) piece. Gloucester, who are sponsored by Olbas Oil, got one back from the penalty spot and in the process ruined my chances to say that “the Olbas Oil sponsored side hadn't had a sniff of goal all match”. Probably for the best, it was a shit gag anyway and I'm glad I didn't get the chance to use it.
Posted by Kenny Legg at 20:59