Boxing Day games are always a little bit special, one of the first you look for on that giddy day when the fixtures are released and ones that usually provide a big derby game in front of a fervent crowd. But, let us not forget the true reason of Boxing Day football; to allow men to get their bored arses out the house, escape the horrors of Christmas television, sink a few festive beverages and also swerve the visit from a procession of bat shit crazy relatives bearing unwanted gifts.

Boxing Day has been the Christmas gift that keeps on giving over the years. Highlights include Lee Phillips exhilarating debut against Dorchester in 2000, the 2-1 victory over Exeter City in 2006 in front of a crowd of 4,294 and of course that magical Boxing Day in 2003 when Weymouth festively stuffed Dorchester 8 (eight) - 0. However nothing compares to the glorious memories of a defeat away against Bashley in 1997 which allowed me to be out of the house for a good 7 (seven) hours. Result. 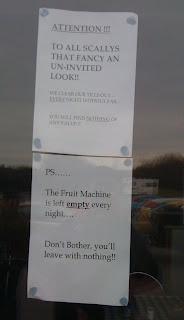 Financial cutbacks have meant 24 hour security patrols have now been replaced by this sign.

However, this years game isn't really a local derby and doesn't even have the courtesy to let me play my Boxing Day 'Get out of Family Hell free' card, as the Zamaretto League fixtures take place on the 27th and this year a couple of family members have had the audacity, some say damn right cheek, to tag along.

Bottom of the table Weymouths visitors are top of the tinpot table toppers Truro City, for whom this fixture does represent some sort of festive derby, as it their second closest game of the season yet still a sleigh busting 150 miles away. However it would have afforded the Truro fans at least 8 hours away from their families and their usual shenanigans of teaching pigs to smoke, feeding beef burgers to swans and breeding 20ft chickens.

Truro have achieved great success since property developer Kevin Heaney began to bankroll the club in 2004, achieving three promotions in four seasons. *doths cap* In my opinion, property developers should be welcomed to football with a carrot (laced with turkey excrement and piss soaked barbed wire) a saucer of milk (mixed with the tears of a thousand lonely skunks) and a mince pie (with a delectable wood lice and septic toenail filling). Weymouth have benefited fantastically well from having a property developer, Malcolm Curtis, "running" the club; as our league record over the last three seasons shows. Hmm...I'm sure Truro are different of course. 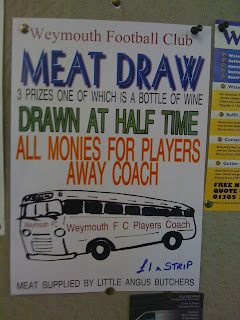 Times are so hard we have to have a meat raffle to pay for the players coach.

Truro have plans for an ambitious new 10,000 all seater stadium. In Weymouth's experience this can only end with an amazing new stadium being built. That nice Malcolm Curtis is going to build us one, he said so. There are also plans for annual pop concerts. Weymouth had one of them....it went well.

Heaney's money has enabled the club to pay good wages and they've signed a load of players from higher leagues who wouldn't necessarily see Truro as the ideal stop on their CV, much like Ben Smith and numerous others did for Weymouth. Truro's most famous player today is ex Fulham striker Barrington Edward 'Barry' Hayles, attracted to the footballing backwater of Cornwall by the challenge on offer and to be part of something big bla bla bla etc... 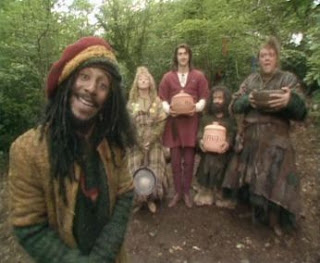 In the stadium bar the three generations of us spend time reminiscing of Weymouth teams gone by, of great players, away trips to strange towns and promotion seasons. Sadly those seasons are now more distant the Star of Bethlehem and it's the Truro City fans in the bar who exude the confidence afforded to fans of a top of the league team turning up at an away game expecting to provide a beat down to their inferior opposition. 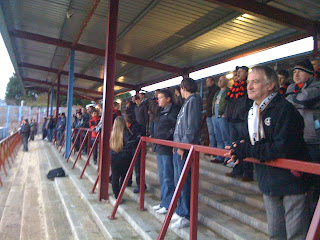 Weymouth fans and Truro fans getting on like Turkey and stuffing.

For the first fifteen minutes the inexperienced Weymouth team, consisting of 5 players who spent last season playing at County level football, matched Truro's team of ex pro's. However once Andy Watkins scored after twenty minutes Weymouths confidence disappeared and the defence displayed the positional sense of a Grandmother after too many Christmas sherrys, allowing Truro to score three more goals before half time.

In the second half Barrington is able to carry on, with his Merry Men and make heroes, out of each of them as Truro outclass a spirited Weymouth, who never really look like scoring throughout the painfully long forty five minutes.

The comfortable afternoons work gives Truro fans the chance to exercise their vocal chords and support their team in going 5 points clear in a way that I am a little jealous about. Granted, your song "we're at the top of the Zamaretto and Blue Square South awaits for me" was mildly humorous but I did find you turning up on our doorstep and singing us your carols of "you're not famous anymore", "going down with the Tivvy" and "who the fucking hell are you" a little mean spirited at this time of year. 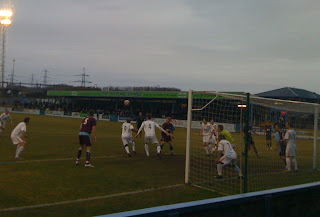 I sometimes wish we were a little more humble about our Martyn Harrisons cheque book propelled rise to the Conference, a little more aware of the fact that the money wouldn't last forever and took steps to prepare for that day. Good luck to Truro City, I hope, for the true fans, that they enjoy their current success and that their club is built on strong sustainable footings. Ours clearly weren't and were paying for that massively now as we are again royally defeated , remain rooted to the bottom of the league and face a Zamaretto Division One South & West Boxing Day game clash against Wimborne Town (sadly only 30 miles away) next season.

For footage of the goals, probably only for Truro fans, click here and for a proper match report and pictures click here.