Last week this here blog was cruelly overlooked for inclusion in the Guardians 100 Football blogs to follow in 2011. Competition was fierce and I can only assume that Adventures In Tinpot rolled in fashionably late at 101st place. However, I have decided that I don't need to be on that list. I will not compromise the layout and structure of my blog in an attempt to suck up to the big hummus eating jessies and attempt to get onto next years list and any changes in this blog style and purely coincidental. 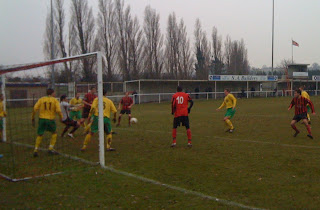 Sometimes reader, the life of a restaurant critic can be a tough one, with some meals weighing heavily on the soul as well as the stomach. The range of cuisine on offer at the Charlie Garland Bar where my companion and I decided to eat was limited and the service and effect on the palette undistinguished. There was no hummus, no dolmades and in fact not a single item of tapas available at all. 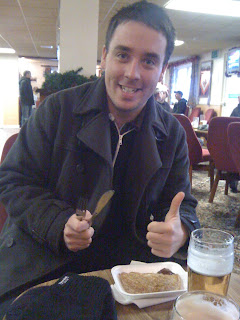 Drinks were reasonably priced, a mere £2.70 a Guinness, and showed where the core strenghts of the establishment lie. After surveying the menu I opted for the much loved staple dish of the local populous, the pasty. I fear the vegetables trapped into the limp pastry were not free range and I suspect the minimal meat content came from a cow that wasn't allowed to graze while listening to the latest Arcade Fire record, as advocated by Hugh Fearnley-Whittingstall. I even noted that the pastry did not even appear to be hand crimped.

In fact I believe I saw the Head Chef remove the pasty from a multi-pack of Tesco value pasties and place the pasty in..and it hurts me to type this......a microwave. Oh, if only I'd agreed to travel to those remote northern restaurants with Steve Coogan when he asked me.

Environmentalist George Monbiot will be organising a boycott of all grassy areas in the Brislington area to raise awareness of Amazonian deforestation. (Various locations) 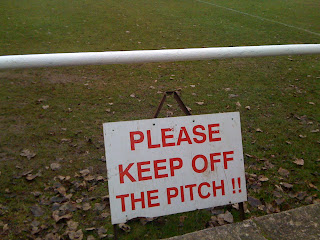 TV Review
They were alright. Two identical vast grey TVs of some inferior Japanese make in the clubhouse. I say vast, but not in a 50" plasma HD 3D show off yet pointless kind of why but vast as in they exhibited such depth they took up half the room and probably had to be lowered into the clubhouse from a crane situated on Venus. Both sets were showing some budget wildlife documentary about a lion with foot rot.

travel
24 hours in Brislington.
The Bristol suburb of Brislington has a range of delightful offerings for a weekend break , making this hip westcountry destination the winter break of the 2011. Spend the morning looking and pointing at the poor people that live there every day and marvel at the architectural wonder that is the HTV Studios. In the afternoon enjoy an unrivaled shopping experience from designer boutique outlets such as Toys R Us and Matalan. A range of food options are available for your evening meal, with thoroughly recommended are China House Take Away and Joe's Kebab World. Conclude your day with a relaxing session at the Bath Road Massage Parlour. 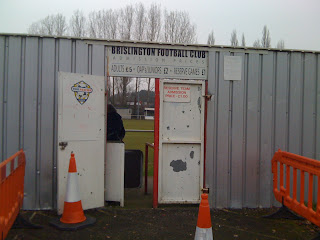 As seen in the Lonely Planet 2011 List of Top Ten Corrugated Iron Football
Stands to See Before You Die.
review
Book Review
The Brislington Football Club programme, (Published by - a rickety old photocopier in urgent need of a new black cartridge, £1), provided a delightfully entertaining preview into this afternoons entertainment. One was able to learn such important information about the publications integral character, 24 year old Brislington defender, Jason Llama.

The publication charts the daily struggles of the Manchester United fan as faces his constant battles derided from his hurtful nickname of "stinky" and recovers from the hurt of his most embarrassing football moment "being dropped for Twents", an occasion ingrained on the national psyche that we can all instantly recall where we were when this happened. The insightful author conveys the unbridled delight of Jason as he reaches the heights of his occupation, as an "investment big wig", and the passion generated as we recall his best football moment of "scoring last minute equalizer in Bristol Varsity" just leaps off the page and the whole programme had this reader enthralled throughout.

An absolute tour de force. A must for your ethically sourced coffee table.

Corrections and clarifications.
The Readers' editor is the AiT internal ombudsman. The AiT policy is to correct significant errors as soon as possible. Email the office of the AiT editor about corrections or clarifications at leggkenny@gmail.com or write to Readers' editor, AiT, Tinpot Place, 90 Bovril Way, Bristol, The phoneline is never open 11am to 5pm UK time Monday to Friday including public holidays. AiT's editorial code incorporates the editors' code overseen by the Press Complaints Commission.
Posted by Kenny Legg at 20:39