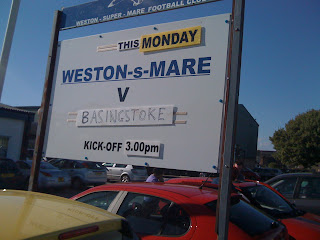 A very professionally hand made sign. "Shall I colour in the letters? Nah, actually I can't be arsed - I'll just finish this B and then tape it to the board".
Sometimes football can ruin a day. For me this was one of those days. If you were a Basingstoke Town fan though it probably ruined your whole weekend. Many of the Basingstoke fans at the game were families who looked like they'd spent the weekend in the god awful town of Weston Super Mare after the male of the household conveniently booked a holiday there shortly after the fixtures were released. Somewhere in Basingstoke a refuge for battered husbands had a sudden influx on slightly sun burnt men in football shirts last night I imagine, while Argos did a roaring trade of frying pans to wives who were suddenly looking to replace their now mysteriously dented pan.

The match was so bad. Basingstoke slightly worse than Weston Super Mare. I hate Weston, I don't know why I went to be honest. However there were the usual bunch of oddballs and picture opportunities that make it all worthwhile. Also, while doing a bit of research for this here blog (no really, I did some research) I stumbled across the article 'Man Gets Stuck in Flume' in the Basingstoke Gazette which induced some chuckles which made up for the misery of Woodspring Park yesterday. I'd happily take 2 hours stuck in a flume than have to watch the video of that match, although the ground did provide some solace through the provision of good old alcohol - something that probably wouldn't be forthcoming in a water flume.

Anyway - enough of this. Pictures. 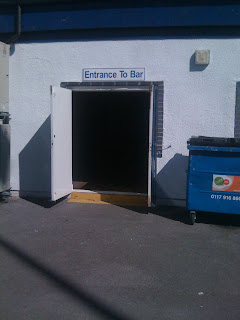 Sweet sweet entrance to the Bar, giver of alcohol. Should have probably just stayed here. 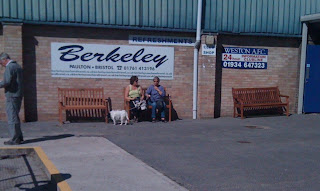 Still, Beryl and Betty had a nice chat as the match went on and at least the dog got out for some fresh air. 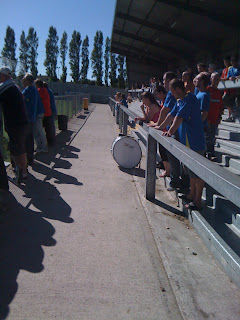 I've had to spend a soddin weekend in Weston, the football's shit and you made me bring this shittin' drum. We're getting divorced. 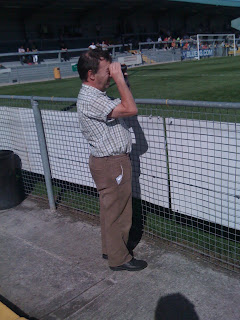 The ultimate non league accessory - binoculars. You're stood right next to the pitch man, just how bad is your eye sight?!! 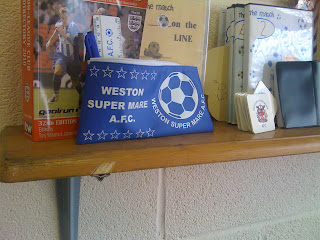 Just in time for the new term, Weston Super Mare AFC pencil cases. For the kid who wants to get bullied.
Posted by Kenny Legg at 20:42