Ah, the smell of tinpot football on the summer air, delightful. My first game back after the summer break and not a moment too soon, especially after the shitfest that was the World Cup. Come on, we all know it was boring, I took a week off work to watch some of that - that's 5 days annual leave I'll never get back!

The first pre-season game was always an exciting game when I was younger and Weymouth were good (well not as dire as we are now), the chance to spot what had changed in the ground over the summer months, the chance to get re-aquanted with the familiar long suffering faces of the terraces and the chance to check that the old moaners had made it through the hot summer alive and were stood in their places on the terraces. This summer for the first time ever I was in Weymouth while a match was on and didn't go. I couldn't face it. So Bristol Manor Farm v Shrivenham was to be my first pre-season outing and sadly enough I approached the meaningless game with more than a modicum of excitement. 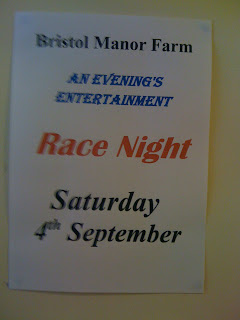 Tickets are going fast, get yours now.
The TV in the club house was showing some lucrative Spurs friendly in some exotic foreign lands, things couldn't have been more different to the surroundings here. The ad break began with an advert involving indie knuckleheads Kasabian jibbering on about what it's like to be a real fan for something called 'Talk of the Terraces' on ESPN. While 'real' football fans like Kasabian apparently talk like a walking version of Nuts magazine the talk in the BMF clubhouse covered such topics as the big upcoming race night, the quality of the music in the clubhouse "ain't you got any Coldplay", to the benefits of midweek football matches "i like Tuesday night matches, I can leave the wife at home watching Holby City" and the upcoming meat raffle being a rollover. Quite was this entailed and whether health and safety were aware of the potential hazardous of meat being rolled over I'm not certain. 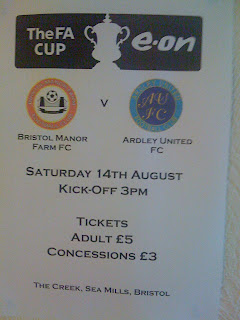 Tickets are going fast, get yours now.

The match itself was great. I bloody love tinpot football. Shrivenham raced into a 3 goal lead in the first half, playing some quality football in the process. Manor Farm looked clueless. The second half saw Manor Farm get a couple of goals back, presumably after a half time rollocking from the Manor Farm manager, John Black. John, (we're on first name terms now) is fast becoming an idol of mine, due to his no nonsense, sweary (When making a sub - "you can't do any worse than the cunts already out there") and sometimes bizarre approach to management. I managed to conduct a pitch side interview with the man himself, well less an interview more of a brief chat between two grown men who we're a little confused as to why they here on an early August evening. In an AiT World Exclusive I am able to review that the goalkeeper for BMF from last season, who's name I don't remember and google can't help with, has joined Clevedon Town and is "a lunatic". There, exclusive news, a groundbreaking AiT first, expect this level of journalistic quality to continue throughout the season.