A great philosopher once wrote...

I wasn’t going to bother with football. Too cold, rainy. But then a man in a KFC Uerdingen scarf walked past me on the train. My tinpot senses tingled. My tail wagged. My eyes rotated furiously in my skull. KFC Uerdingen, former Cup Winners Cup quarter finalists, nearby?

Maintaining a safe distance I followed scarf man from the train, over the wind lashed bridge, splashing through the rapidly expanding puddles, along the sodden/sodding dual carriageway, pretending to do up my shoelaces when we reach traffic lights, through the sedate housing estate and in to tinpot footballs SF Baumberg. 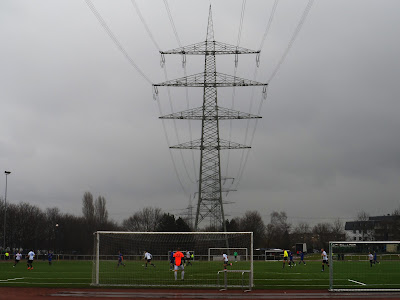 Uerdingen are pissing the league. You probably read about it here already though didn’t you? 17 points clear at the top, with a tremendous stadium and by far the biggest fanbase in the league. For small clubs like SF Baumberg it’s a chance to make some mega euro bucks and entry is bumped up from 5 (five) to 9 (nine) Euros to take advantage of the huge number of, tinpot comparatively speaking, Uerdingen fans. Some of whom were being stalked by suspicious looking English man. 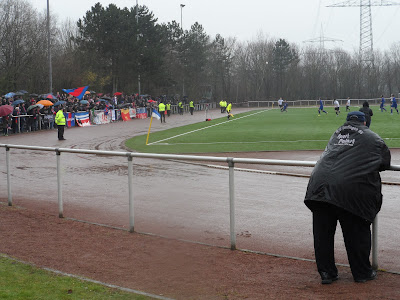 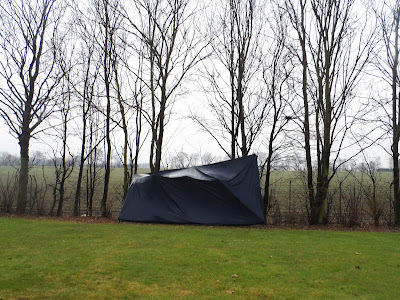 The body was found in an area of secluded woodland next to the football pitch.
There was no clubhouse. Just four man grilling an unending supply of bratwurst and shoving them into stale bread rolls for success starved Uerdingen fans. Old women sold cakes from a garage, new barrels of beer were constantly required, people wear comedy wigs, a spotty youth boomed out horrendous music from some speakers in the back of a Luton van as, despite the heavy rain, the early hours of the inevitable KFC Uerdingen promotion party get underway. 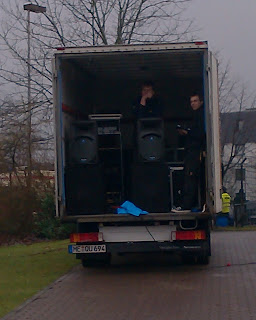 Hello ladies, wanna come back to my truck to listen to some music?

The teams emerged and took the famous walk to the pitch which every young German fussball fan dreams of. From the dressing rooms, past the bratwurst stands, down a grass bank (where already hammered fans seek high-fives), under the police crime scene tape, across the ash, around the long jump pit and finally onto the famous Astroturf (I’ve never smoked Astroturf) of the Bezirkssportsanlage Baumberg. 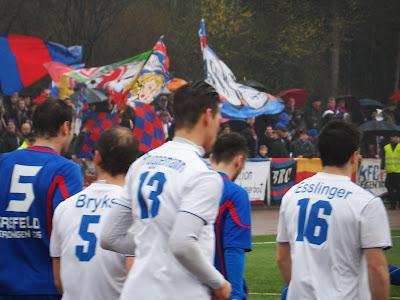 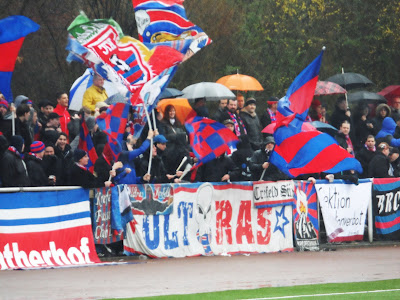 At kick off it was lashing down and not an inch of roof in sight. The dugouts were two small marquees. Uerdingen fans gathered around their flag waving ultras. Baumberg fans gathered under a large golf umbrella. Uerdingen had little trouble in the first half. Why would they? They’ve played ten away games this season and one all ten. Previous recipient of a unfunny, laboured AiT gag Issa Issa scored a penalty after 33 minutes, his 23rd goal of the season. The disco van, which was by now parked with the engine running, a cork in the exhaust and a hosepipe directly into my mind decided this would be a fitting tune to repeat for the rest of the match. “His friends call him Issa and he is the main geezer, and he'll vibe up the place like no other man could, he's refined, sublime, he makes you feel fine, though very much maligned and misunderstood, but if you know Issa he's a real crowd pleaser, he's ever so good, he's Issa Issa, he’s good. 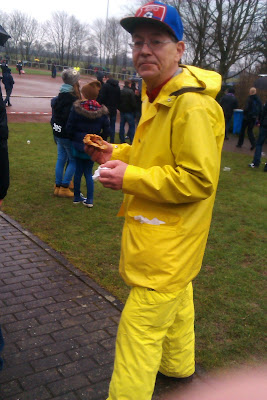 Has anyone got any Vera's ?

Having reversed the van out my head I left it to the pro, well rank amateur, to go back to playing the tunes, this time audibly, from the back of the van at half time Uerdingen fans gather around. You can sense a presence in the sound of the crowd. He gets them all at it - the party starts rocking - the people get excited. It's time to shout LOUD! UERDINGEN, UERDINGEN, KFC UERDINGEN. Ultras danced like maniacs. Around a van with speakers in it. In the pissing rain. At a 5th division football match. Roaringly drunk men, who’d barely strayed a glow stick away from the beer stand all match, joined in, everyone gathered round to laugh, the party ignites like it's comin' alive and this turns into the best half time in the history of intervals. Wicked! The atmosphere takes you to the top, shakes you all around, then back down. The comedown. The Ultras freeze and gather into a huddle..... And then break into “I Just Called To Say I Love You” by Stevie Wonder. Beautiful. 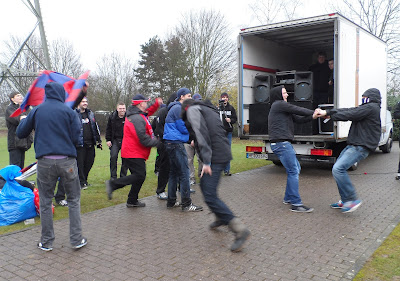 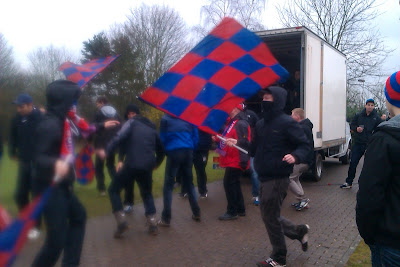 For the second half Uerdingen were in complete control, playing the ball backwards and then forwards, forwards and then backwards, Issa Issa is the geezer who loves to muscle in. It’s his corner that leads to non easily crowbared into a 90’s music lyric’s Monir Ibrahim heading in the second goal. 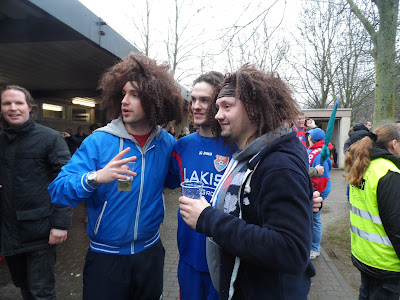 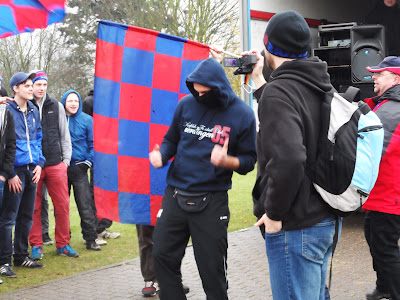 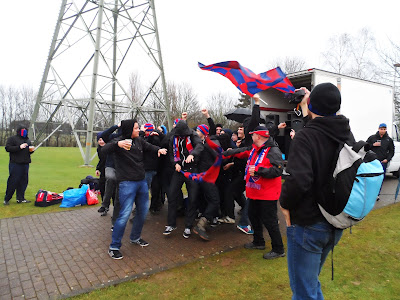 Another easy three points for Uerdingen, a bumper pay day for Baumberg and it’s all back to the van! WICKED!