Old men shuffle to an arthritic induced stop on the gravel surrounding to the pitch, two old men smoke pipes high up in the creaking wooden stand, slightly younger men stick banners proclaiming themselves the “Youth Crew” to a rusting barrier.  Schwarz Weiss Essen is a traditional club with a strong history, the terraces of the Uhlenkrug stadium are packed with stories of the good old days past and even the name (Black and White) recalls more successful, simpler, monochrome times. 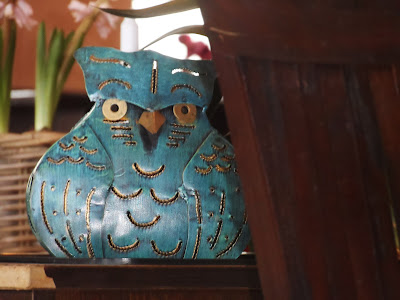 The latest in our series titled "scary owls in German clubhouses" See here for more. 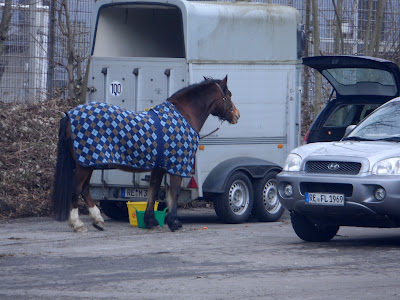 Now, I'm not suggesting that the away team didn't bring a lot of fans. You can make your own judgement from the quilted mode of transport they arrived in.

The Black & Whites brightest hour was in 1959 when they won the German Cup, becoming the first ever second division side to win the trophy. Since then it’s been mostly dark times, with the club narrowly avoiding insolvency thanks to some last minute fund raising earlier this year. In the hour of need the club were able to call on Jens Lehmann for some help. Pissypants, spectactles thief Jens Lehmann donated some shirts for his former club to raffle off on a popular internet based auction site. Oliver Bierhoff also played here. 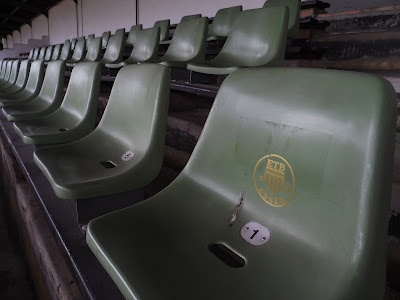 "I've got a great idea. We stick little Schwarz Weiss Essen stickers on every seat. *slaps on sticker*.
Great idea, how many have we got?
Eh.....one" 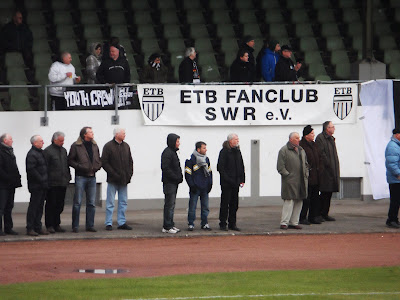 The Unhlenkrug was built to hold 35.000 people, this grew to 45,000 but most of the terraces are now buried under a shallow grassy grave and the capacity is just 9,950. Today just over 200 are in attendance.
It’s not just the club and it’s stadium that have seen better days. The main sponsor is Fila. Apparently they’re still going, who knew? I thought they went out of business in the late 90’s along with C&A, Opal Fruits and Ini Kamoze. Their logo is all over the place the stadium giving it a strange mix of 1990’s basketball branding combined with old peoples home chic. 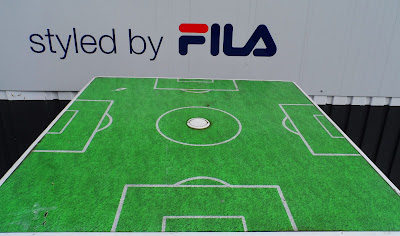 Fila's idea for a four goal game of football sadly contributed to their demise.

Obviously the place to launch a comeback to the dizzy heights of the 90's are a German 4th division side with all its complete lack of accompanying razzle and also dazzle. Having mocked Fila I have to say the kit is nice, if a little bit like a off centre archery range in a 1940's silent movie due to its concentric circle approach. 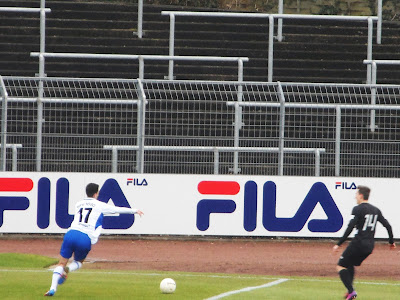 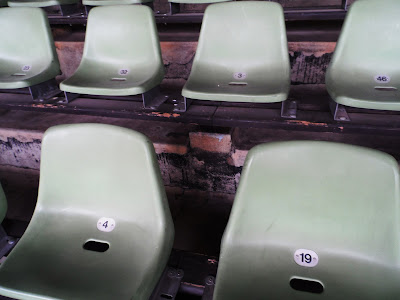 That's seat 4 next to seat 19. In the row behind 46 is next to three and 32. Finding your allocated seat at SW Essen can prove problematic.

The club shop, like most purveyors of sports equipment doesn't sell Fila stuff, preferring to sell a locally made curry sauce. Obviously. The food options are the usual vegetarian denying options of Bratwurst and Frikadelle while coffee and beer is sold from a bar with a slanted roof and three tables, all of which are populated by elderly chattering football widows. 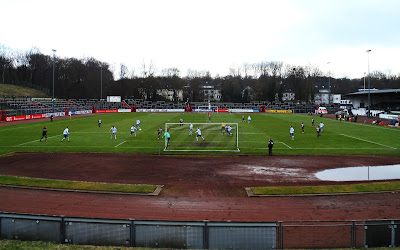 Groundhoppers climb the overgrown terraces for pictures the rest of the crowd stay close to the lower levels of the stands for knee joint reasons.On the pitch TuRu start the game quickly while Essen slowly fila their way into the game. Booooo! Sorry. It's quiet in the ground. The occasional honk by an embarrassed airhorn interrupts the shouts of the players echoing around the expansive emptiness. The Essen keeper shouts non stop, hearing aid settings are adjusted downward accordingly. 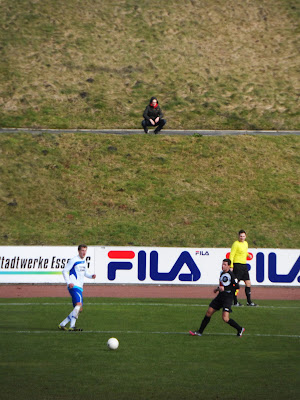 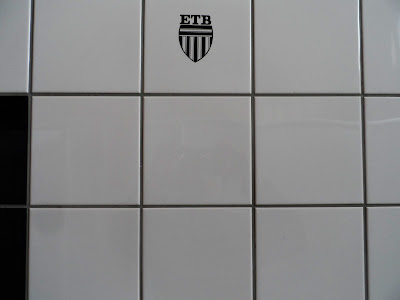 When TuRu score the air is thick with "Ja", I've not heard so many joyfully exclaimed ja's since I accidentally watched a particularly energetic episode of Peep  RTL2 in 1997. By half time Fila's great black and white hopes are two down. A mournful PA announcer gives out the half time score before releasing a heartfelt advert for the curry sauce. 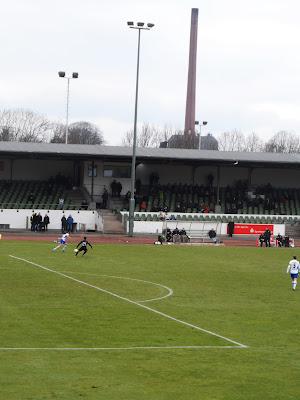 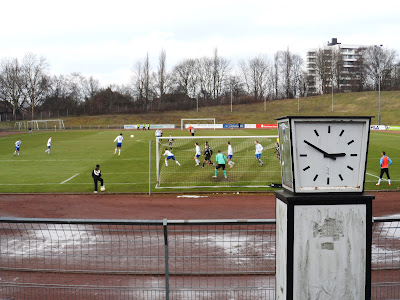 Essen attack the empty terrace end at the second half. A terrace empty except for five people and a four sided 10ft high clock which stopped long ago in the good times.With the knackered clock showing 2:50, 6:37, 9:42 and 3:15 Essen score. Air horns are blown and weak wrist bones undertake careful clapping.
Despite their best efforts Schwarz Weiss couldn't find an equaliser, a more important battle for their very existence is more important.  Despite my best efforts I haven't yet received any free Fila merchandise.
Posted by Kenny Legg at 21:37