A song celebrating the arrival of half time? Gah.

It’s hot, I'm on a packed train, the toilet's broke, I'm hungover, I'm with (award winning) @theballisround, (genre defining) @dannylast, and (big) @bigdeaksy and we're all surrounded by a bunch of drunk people who look like they’ve been diverted from their trip to a Levellers concert to a protest about saving an obscure piece of boring scrub land from something fun. Yep, We're on a train full of St. Pauli fans going to an away match. We're all delighted to be here. If you need me to explain about St. Pauli and their fans you’re probably on the wrong blog. 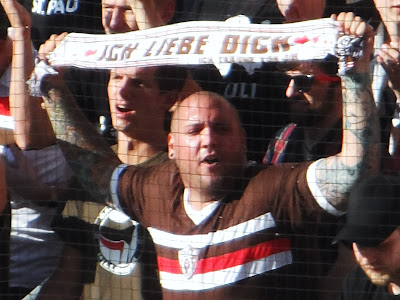 The St. Pauli fans are met with bright sunshine and a forceful welcome by the local Polizei in Paderborn, a town which is as much middle class as it is in the middle of nowhere. A bunch of lefties with piercings and freaky haircuts in the town is always going to cause a bit of a kerfuffle so they're shoved off towards a crowded train platform, circled by police horses and recorded with video cameras whilst being viewed with intense suspicion. Meanwhile we're herded out into the sunshine before all being wedged into a fat mans funking armpit to claim one of the last remaining spaces on the funbus destination Paderborn FC. 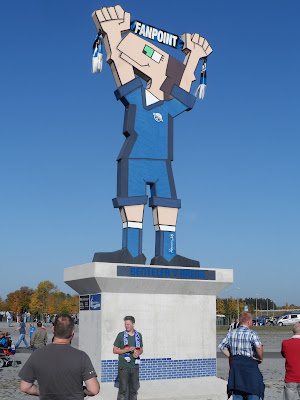 For a town already in the middle of nowhere Paderborn's (Nicholas) Benteler stadium manages to be at the epicentre. This could be the edge of the world. If you don’t believe me tune into the “Arena Cam” of Nicholas Benteler for an hour or eleven. Nothing will happen. Even on a match day.
From the outside the stadium looks hmm “generic” and inside well, it’s all a bit weird. Every terrace is raised up, with food stalls and toilets underneath, and any view of the pitch is blocked off. Underneath the away terrace some St. Pauli fans were pepper sprayed by the Polizei while, underneath the Paderborn one, I paid Euro 3,50 for a measly portion of chips. We all have our little gripes with Paderborn. 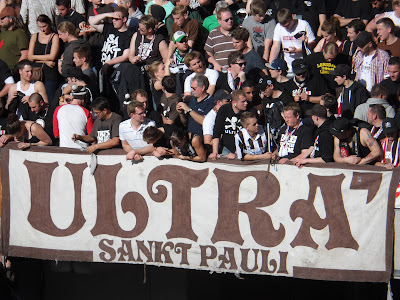 A picture of the Ultra Sankt Pauli flag I'll go on to mention shortly. Ah, I've ruined the surprise now. 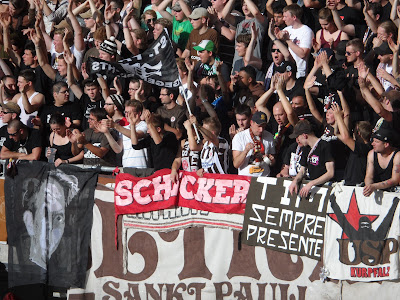 A picture of the Shickeria flag I might go on to mention shortly. I will.

The St. Pauli terrace soon fills up with fans rubbing their eyes while other parts of the ground fill up with Pauli fans blinking into the autumnal sunlight. Fans compete for space for their flags. A large one bearing the word “Ultras” soon disappears underneath a plethora of smaller ones, including one from Bayern Munich’s Shickeria. Finally any piece of cloth within a 30sq metre area is lost as shirt, seemingly belonging to the worlds fattest, tallest man, is wafted over the side of the stand. 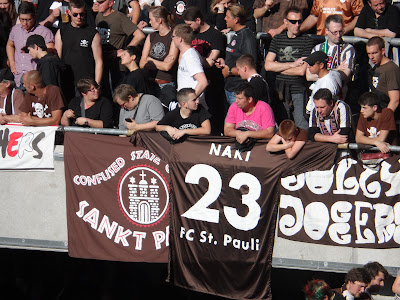 Have you got this in XXXXXXXXXXL? You have, I'll take it.

The Paderborn fans are ready for the match too. Just before kick off an old boy sits next to me, carefully unfolds a sheet with the lyrics to the Paderborn club song and mumbles his way through that. Yes, every German club has it own song warble. Normally its rocky. Football fans like rock. Football fans in Paderborn like drivel, they like wailing harmonies, they like atrocious guitar 80's guitar solos, they love bits where the song goes “ooohhhh, ooohhhh, they like lyrics written by typewriter walloping song gibbons (“Paderborn, Paderborn my town, I love you”). Gah. 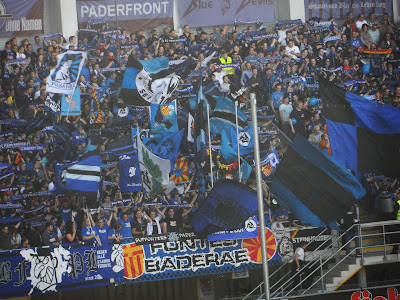 At kick off St. Pauli fans unfurl a banner about the protection of fan culture whilst remaining silent with their arms crossed, as if handcuffed. They then break into a song about police brutality whilst waving flags of the club crest, a ferocious looking skull and cross bones. Paderborn fans wave flags of the club crest, a run of the mill circle that has carelessly been coloured way outsidethe lines by a slapdash graphic designer. 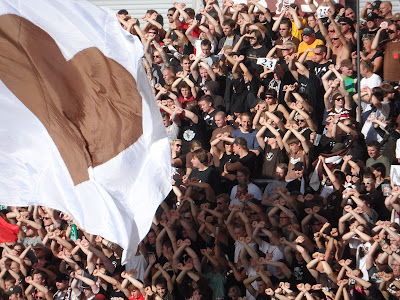 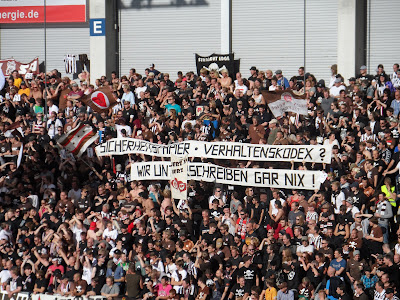 After that Danny, Deacs and I barely watched the match. Meanwhile Stuart followed the game in his usual intense manner, via Twitter. (#injokes) The St. Pauli fans didn’t stop waving their arms and singing for the ninety minutes. No one needs a song sheet. Everyone knows every word and every intricate hand movement that accompanies every song. 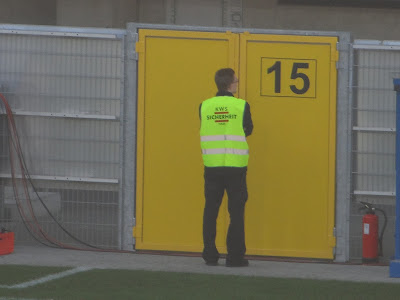 Fritz's seat in row 15 proved to be a massive disappointment. 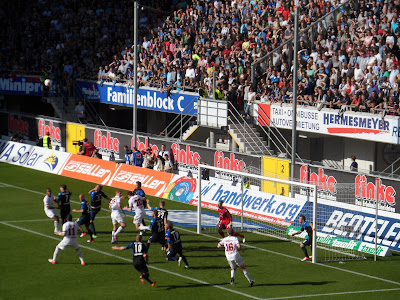 Now, I know not every team has to be as different at St. Pauli but a song celebrating the arrival of half time song is a low Paderborn. I was that angry when I heard it I almost choked on my pepper spray.

Wrap your lugholes around this. No do. You want to listen to it don't you. You wont thank me. But do.  Man alive Paderborn. What were you thinking? 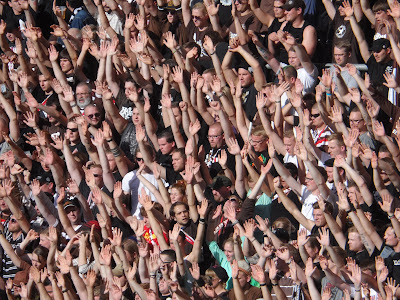 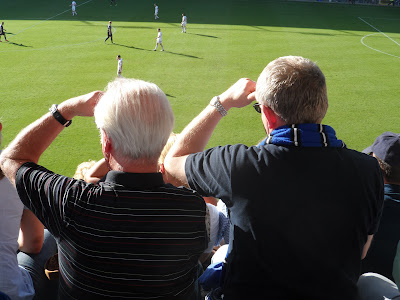 Three minutes into the second half (I'm ready for you - gah!) Daniel Ginczek scores to give new Pauli manager and Germany's third best Michael Stipe impersonator Michael Frontzeck a great start to his first game in charge and send the fans bonkers barmy. A few seconds later Stuart informs us about the goal after reading about it in less than 140 characters on his mobile. Amongst the Pauli fans everybody hurts (sorry) as Paderborn equalise with a move slicker than Frontzeck’s shiny bonce, through former player Deniz Naki. There was probably a goal celebration song, by this point I'd tightly sewn my ears up. 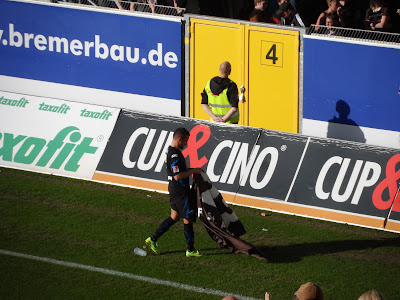 Have you got this in a M?

The mystery of the gargantuan shirt is solved after the game. Naki applauds the away fans and the Pauli fans applaud him. The huge shirt, with “Naki 23” on the back is lobbed down and this touching gesture very nearly sees Naki smothered alive. He applauds the fans, they applaud him and it's an impressive end to a great days support. No matter the political leanings, the appearance, the hair colour or percentage of body mass covered in piercings these are just great football fans and a superb spectacle to watch.

Now, someone get this shitting Paderborn half time song out of my head before I double Van Gogh myself.

For a sensible take on the day read @TeddyFCUM 's take on things over here, Stuart Fuller managed to seperate himself from Twitter long enough to write this and Danny Last managed to focus long enough to take these snaps. Big Deacs has subsequently contributed sod all.
Posted by Kenny Legg at 21:12