The AiT Big Book of Football Nonsense states that grounds are flipping ace if they meet the following criteria: 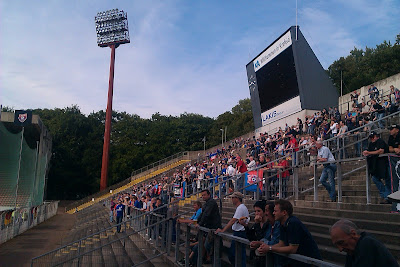 Well hello KFC Uerdigen, you’re a little treat aren’t you? A spectacular mix of all the above, coupled with the familiar tinpotness of: 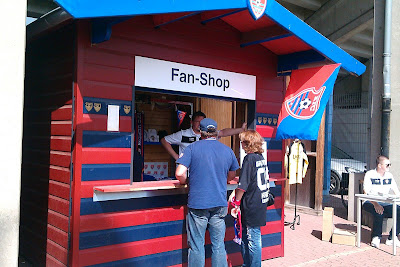 I think it's well documented that I'm a massive fan of sheds in grounds.

But, KFC have something that makes them an extra bit special. A COFFEE AND CAKE SHOP!! Yes I’m using capitals. It was like being at a school fete at an under performing junior school where the Mums had spent hours baking cakes for sale at rock bottom prices. I’m all for the school fete aesthetic at football and would like three strips of raffle tickets and to wallop five penalties at the over enthusiastic PE teacher. 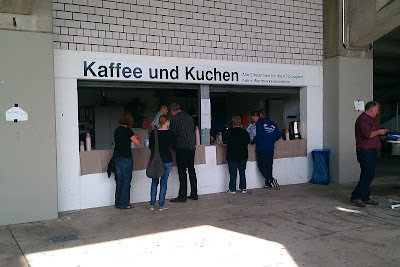 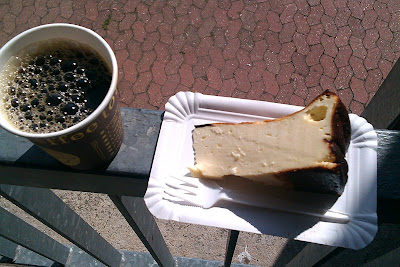 A coffee and cake shop. Did I try it? Of course, but only in the name of “research”. Cheesecake. A cake of cheese? At football? Homemade plum cake Fraulein? Slice of apple cake flag waving ultra? Why not? It made a refreshing change from the monotony of bratwurst and beer....which of course I also had soon after. 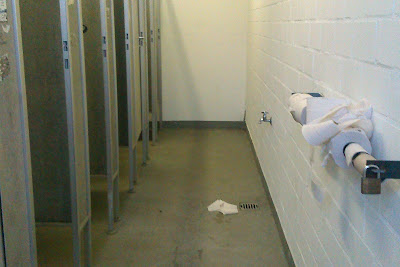 Call me old fashioned but if I'm taking a dump I like to have the toilet paper in the cubicle with me, it's a system that seems to have worked well for me up to now.

As I made my way into the ground, in my elasticated sweatpants, I was immediately a little bit teary due to the presence of criteria a-d. Why such a mega ground for a level six club with meagre crowds? Well, back in what I like to call “the day”, but others like to call the period between 1953 and 1995, Asprin peddlers Bayer shoved wheelbarrows overflowing with Deutschmarks towards the club. This enabled them to pop down to B&Q to pick up two massive great terraces, four hulking great floodlights and one national grid worrying sized scoreboard. Bayer also paid for some decent players and a day trip to Denmark to pick up players like Brian Laudrup. It worked. In the 1980’s the club played in the Bundesliga, finishing third in 1986, won the DFB Pokal in 1985 and made it through to the semi finals of the Cup Winners Cup in 1986. Since Bayer stopped their pocket money in 1995 then they’ve hurtled down the leagues with the speed of a knitted rat forcibly shoved down a series of taped together bog rolls by a grumpy RE teacher before, finally being walloped round the head at the end of last season when a league restructure meant they dropped down to the 6th division. 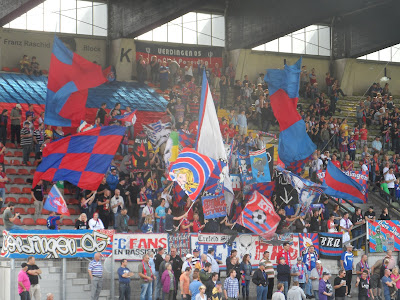 Die Ultras. Die. It's German for The Ultras. The

Not that the fans here seem to mind. A bunch of Young Enterprise competing Ultras are busy flogging their stickers from a rickety table outside the ground while other kids display their impressive artwork across the stand inside. Everyone’s got their own banner. Harlekins Krefeld have got one. Fan club Poseidon have one. Everyone’s favourite Uerdingen fan group named after a prison based Australian soap, block H have one. My favourite group, because I need a favourite KFC Uerdingen fan group, are a bunch of old boys gathered behind a flag with “Alte Garde” written on it and all wearing matching black shirts and black baseball caps, yes, with Alte Garde written on it. Because going to the football just isn’t the same unless you’re stood with your mates in matching shirts and baseball caps. 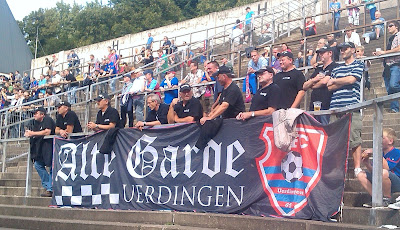 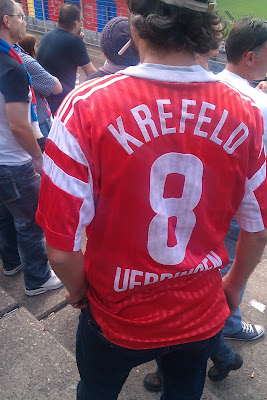 Now, if you haven’t got a flag then the rules here dictate that you have to wear an old replica shirt, the more bobbly the better. Here’s a selection in The Gallery. 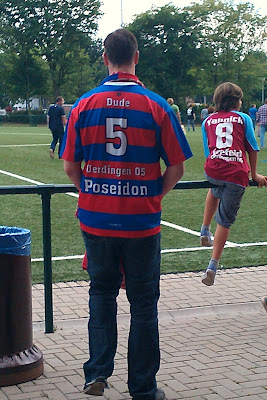 Despite my repeated requests this man was unable to tell me where my misplaced automobile was located.

And if you’re not stood behind a home made flag, or wearing a tatty KFC Uerdingen shirt then you are the old boy who stands at the front of the terrace and bellows KFC, KFC, KFC on repeat throughout the entire match. The man is clearly a few light bulbs short of the full floodlight but he’s having a good time, he’s a character and that’s what football is about. Plus, that’s probably what my future holds. 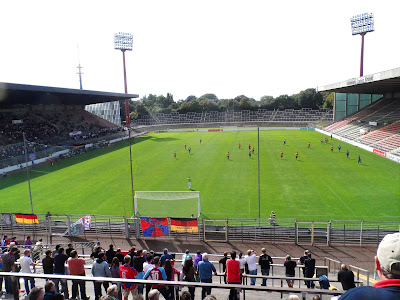 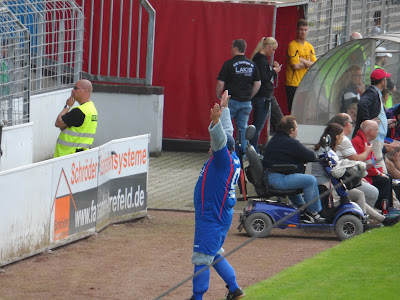 As things get tense KFC's elephant mascot decides to abandon the whole cherade and reveal his true identity. 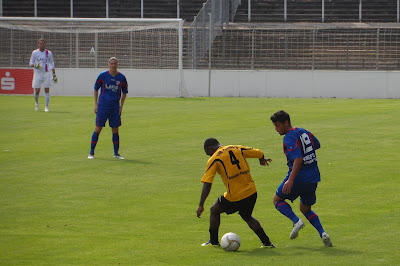 Despite hardly touching the ball for the first fifty minutes Homburg have the cheek to take the lead through Dragovic, or Vicar Dog if you prefer your match reports with the players name switched to anagrams. Homburg’s captain, Sneaker Tank, or Ersan Tekkan, was sent off with half an hour to play and with ten minutes left Uerdingen, and the Congo’s, Kosi Saka (Soak Ska I) scores a deserved equaliser. Sadly, as is often the case this means loud techno music, no doubt produced by some bedroom bound zit faced German, booming out over the tannoy. Loud German techno music does not feature on the flipping ace grounds criteria, which is a shame as KFC Uerdingen ticks every other criteria superbly.

Oh and they have cake. I like cake. A lot.

This blog was written by Kenny Legg exclusively for the  award winning   award nominated blog A Dentist Oven Turnip.
Posted by Kenny Legg at 18:01