If I Could Turn Back Time

Hereford United's Edgar Street is how all football grounds should be; in the middle of the town and next to a cattle market. It's been here since 1924, it's cramped, it's surrounded by muddy grass, it's got a huge terrace and is steeped in history....garrr....it's no use. I'm going to have to mention Ronnie Radford. I had to. It's impossible not to. 4 lines in though, not bad. 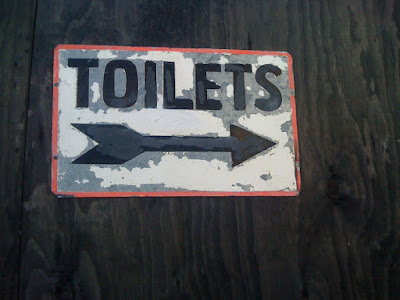 Blog writers rulebook. Rule 12: Use a really captivating picture to draw people in and hold their attention.

This month is 40 years since Radford thwacked that goal in to help Southern League Hereford beat Division One Newcastle United. Hereford marked the occasion by holding a Gala dinner at their terrifically named “Starlite Rooms” (of course The Starlite Rooms). The event saw the players reunited, a sheepskin coated Motty putting in an appearance, some guitar strumming loon play “The Ballad of Ronnie Radford” and a hundred parka jacketed kids released from a sack to run manically across the pitch. If Hereford really want to know how to mark a goal it's not by having a bit of a chat in it's like these crazy Argentinians, who are clearly one rocky outcrop short of the full Malvinas. 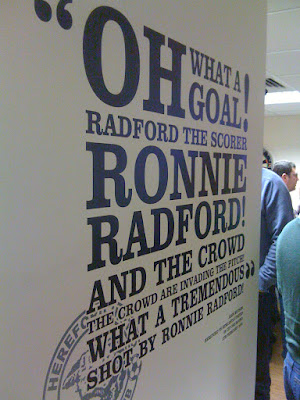 Wherever you look there's reminders of that day. The club shop stocks Radford era retro shirts. The Radford suite contains a huge mural of the post goal celebrations, along with a cupboard an sideboard that look strikingly out of place and seem to have been squired from the house clearance of a recently deceased pair of pensioners. In the, recently re-opened, Starlite Rooms, a club that sounds like it's part of Den Perry's evil empire, there are numerous photos from the game, large blurry mural versions of those photos, Motty's commentary from the game write large on the wall, a frame containing fibres from a parka jacket recently found on a Time Team dig of the ground and a display cabinet containing the big toenail Radford used to punt the ball in. 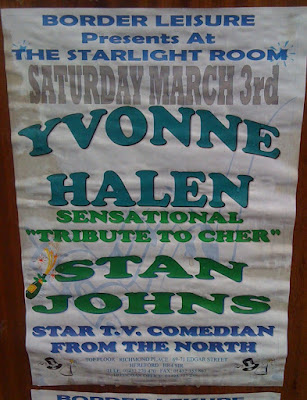 Dear Yvonne Halen, I'm sure your Cher impersonation is very good but surely with a name like that you'd be better off doing a one women tribute to Van Halen?

According to Stan Johns' YouTube he "continues to delight audiences worldwide on many of the
top cruise ships afloat." Those gigs on sunken cruise ships clearly didn't work out for you then northern Stan?

Both bars are packed before kick off. In The Radford Suite a local old couple sporting matching bright white comb over haircuts chat away while a Burberry clad yoof, from today's visitors, Swindon Town, organises his rabble. Swindon Town FC, Paolo Di Canio. Let's get that out the way straight away. 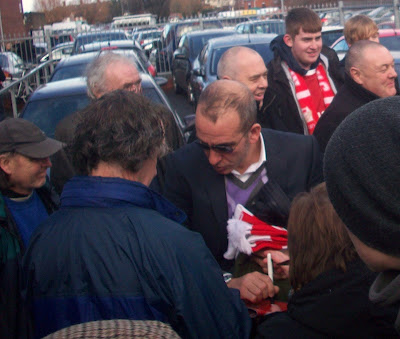 A well dressed man in sunglasses gets in the way of the judging of the "Best Side Profile Round" as the three finalist's in 2012's "Hereford Middle Aged Man Of the Year" competition line up. 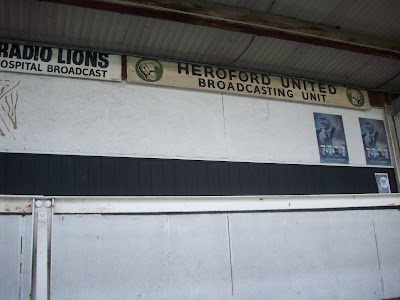 Adidas clad Swindon are already looking at a future in a higher division, while Admiral sporting Hereford have gone 9 home games without a win and are contemplating a return to the Southern League. Swindon pass it around like a team that has been compared to Brazil for comedy effect but is, in a cruel twist,not actually Brazil, while Hereford focus on smacking long balls forward to textbook lower league behemoth target man, Nathan Elder, a man who had a bad touch even for a big man. Back-passes to the Swindon keeper are waltzed away from danger while any to the Hereford keeper, Adam Bartlett, are badly mishit by a player who started the game shakier than a rattle snake playing the maracas. 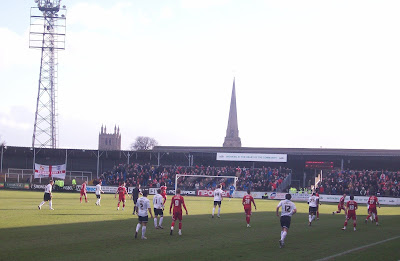 From left to right: Thing of architectural beauty, some castle, big pointy thing.
It's one of these mishit back-passes that leads to Hereford conceding a penalty, which Paul Caddis converts, just before half time. Hereford are booed off by the fans behind the goal, however the sound is largely drowned out by the sound of Thermos flasks opening on the Cargill terrace. I don't think I've ever witnessed a higher flask/miserable fan ratio. One family gathered round a huge backpack which held various packs of biscuits and a Thermos with similar proportions to a submarine. Amongst this old men tuned in their transistor radios and shouted scores to a disinterested crowd, kids play with toys on the terraces, whilst adults blamed "Jimmy Hill and his reprobates" from the sorry state of English football, all against a soundtrack of early 70's hit "Me and you and a dog named Boo" by Lobo. I imagine this is what watching football in 1971 was like. *doffs 1970's style feathered Fedora stetson hat* 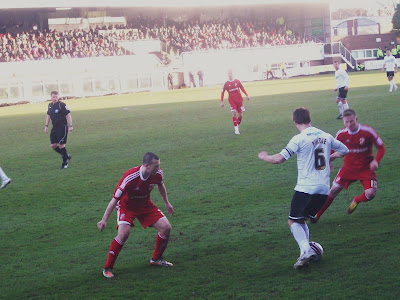 Token match shot.
Swindon score again through Paul Benson on 62 minutes after some relaxed defending which suggests Hereford's defence have been spending a little too much time supporting their club's pitch side sponsor, Growmaster Hydroponics. *makes noise in style of Ali G*. 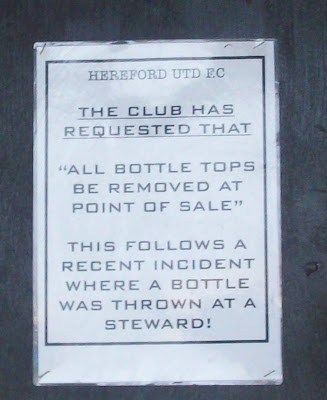 Oh the humanity! Won't somebody think of the stewards. 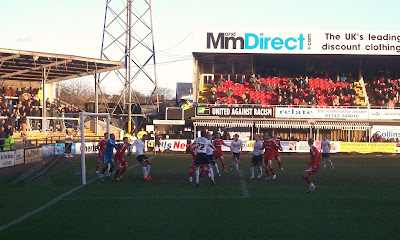 Token match shot II
However, Hereford respond quicker than a stoned student and Rob Purdie radfords in a goal. From then on it's all Hereford. The pitch cuts up badly, a howling gale causes polystyrene cups to swirl around the pitch, squalling rain lashes down and suddenly hoofing a ball up to a humongous immobile brute of a striker doesn't seem such like a bad idea. Fancy dan Swindon are forced to battle to hold on to their lead. Hereford force them into mistakes, corners causes chaos in the quagmire of a goalmouth and Byron Anthony slams a header against the bar. The Hereford fans simultaneously get right behind their team and on the backs of Swindon's "disgraceful, typical itie tactics" but the away team dig in and deny Hereford the goal they need to Cher the points, leaving Swindon's 1181 travelling fans to Believe in promotion.

For match highlights click your interweb mouse here. Not here.